Review: King Arthur’s Night is a lovingly made adventure 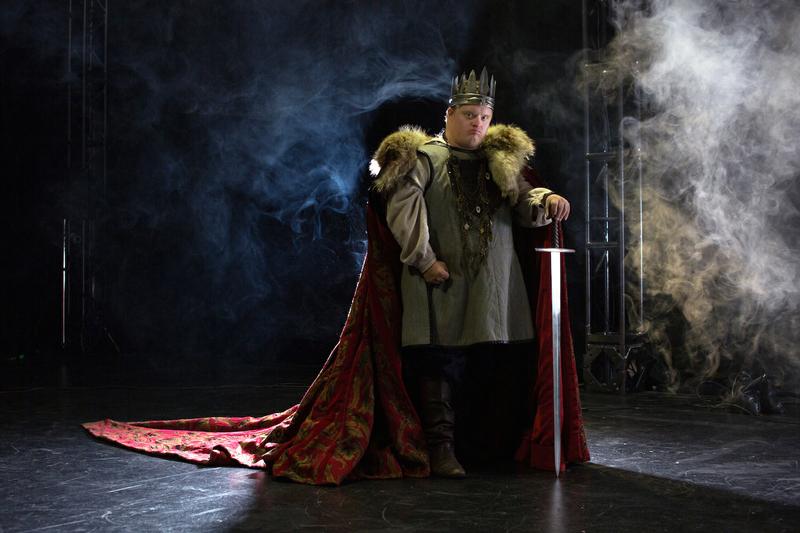 The PuSh Festival’s presentation of King Arthur’s Night premiered to a sold-out audience on January 31 at the Frederic Wood Theatre. The play is the second from the duo of Niall McNeil and Marcus Youssef and like their first collaboration Peter Panties, the production is a refreshingly diverse reimagining of a well-known story. McNeil, who has Down syndrome, writes to all audiences while not shying away from showcasing Down syndrome through the scripting and casting — a creative decision that makes the play both more original and widely appealing.

King Arthur’s Night weaves together elements recognizable and personal: it is based on Arthurian legend while incorporating elements of the life of McNeil, who also plays King Arthur. McNeil’s script places Camelot in an environment similar to the Harrison Hot Springs, a favourite vacation spot for the actor-playwright; and an unpleasant childhood encounter with a goat influences the aesthetic and allies of the villainous Mordred, played by Nathan Kay.

The play opens with a hilarious duologue that partially establishes tone. The duologue nonchalantly utilizes a slideshow and other modern quirks to lay some background, as Marcus Youssef, who plays Merlin, breaks the fourth wall to address the audience alongside King Arthur. Overall, though, this introduction is more indicative of the dialogue to come than of the plot, which is far more intense.

The plot is fairly straightforward on paper, although the inclusion of subtle flashbacks and a nonlinear subplot make it a bit confusing. However, a visual story that explains the progression of events scene-by-scene is available for those who need or prefer visual aids before attending the performance.

The characters are lovingly drawn and well-rendered by their actors. Queen Guinevere, played by Tiffany King, takes a particular joy in dancing that invites audience members to groove along with her in their seats; Billy Marchenski’s Lancelot is as declarative and dramatic as any before him, while tempered by others’ droll reactions to his flair; Andrew Gordon’s Saxon packs a punch — verbally, physically or with stage presence — in every appearance; and McNeil’s Arthur is commanding and compelling, both traits juxtaposed by his confident, impatient and humorous dialogue.

All the dialogue — comical or solemn — is gold, but particular gems include Morgana’s deadpan “This is my anger mountain. I wanna throw stuff;” Queen Guinevere’s softly delivered assertion to Lancelot that “the queen loves you” and basically any interaction between Merlin and King Arthur.

King Arthur’s Night’s songs, with lyrics by McNeil and composed by Veda Hille, are powerful and atmospheric, especially as they are performed with a live band and choir. Lay Down Your Hearts, the song used in the trailers for the production and the opening/closing tune, was a particular favourite — audience members hummed it on their way out and drummed along in-theatre.

Shizuka Kai’s set is simple and effective, with a menacing tree as the centrepiece and sheer screens through which choir members can be seen. With expert lighting from Kyla Gardiner, ornate costuming from Christine Reimer and dramatic, coiling smoke, King Arthur’s Night does not lack ambience.

Ultimately a play about friendship and loyalty, King Arthur’s Night reflects the long-running partnership of its co-playwrights and invites the audience to share in that warmth — perfect for a rainy February day.