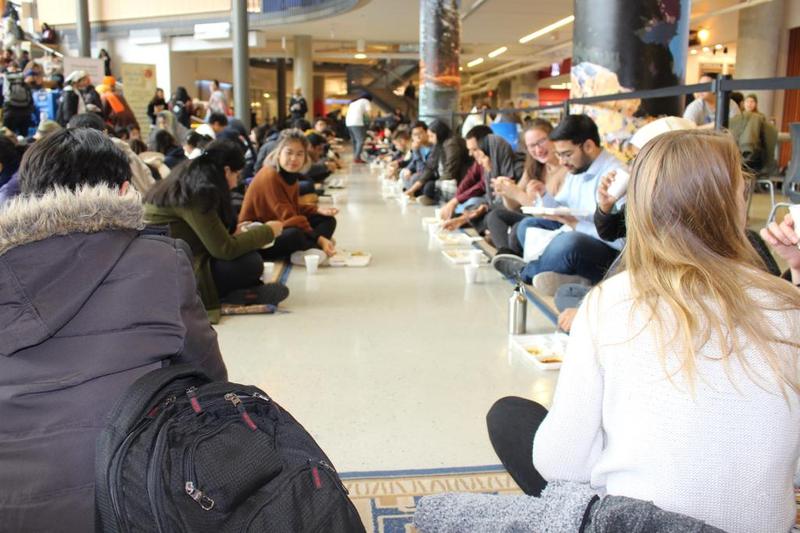 “We’ve been trying to expose the concept of Langar outside of the temples,” said Gurjot Singh, an organizer with the Basics of Sikhi Canada, “because it’s such a beautiful concept.” Courtesy UBC SSA

On January 25, a line formed up the stairs to the Nest’s lower atrium, leading up to another line of people wearing head covers and serving food. Mats lined the floor where people sat and ate together. Sounds of stringed instruments and singing floated above the usual hum of activity in the campus hotspot.

The Sikh Student Association of UBC in partnership with Guru Nanak’s Free Kitchen and Basics of Sikhi Canada hosted Langar Day for the second time this school year.

“Langar” means free meals for all and the Sikh community adopted this practice 550 years ago. While one can seek Langar at any Gurdwara, a Sikh place of worship, the SSA decided to bring Langar to campus.

“We’ve been trying to expose the concept of Langar outside of the temples,” said Gurjot Singh, an organizer with the Basics of Sikhi Canada, “because it’s such a beautiful concept.”

During Langar, everyone sits on the same ground, eating the same food, despite their caste or background. Both men and women serve food, all of the food served is vegetarian and anyone who would like to is allowed to take part in the meal.

“It’s about equality in so many ways,” added Punar Kaur, a second year UBC student.

“We just want to show love and selflessness and serve other people,” said Singh. “Our aim isn’t to convert people, but we are trying to spread awareness. I’ve had this conversation so many times: People say, ‘Why are Muslims serving food?’ Hold on, we aren’t Muslims, we’re Sikh. It’s a different faith. People don’t know what a Sikh is. With events like this, when people ask those questions, we can create awareness.”

Attendees of the event seemed to agree that the essence of Langar was nothing but kind-hearted. One student who was eating said, “There’s no imposition. ... It’s nice as a grad student to get a free meal.”

The event is not only an opportunity for the Sikh community to reach others but to strengthen the bonds within.

“As a kid, it was something we took for granted because we would go to the Gurdwaras and food was always being served,” said Punar Kaur, “but over time, something I have come to love is the moment before serving the community. The feeling of everyone coming together to prepare the food in the big kitchen.”

Another attendee said, “It’s nice having the things I do at home with my parents, also at UBC. The only difference is that I am with my friends.”