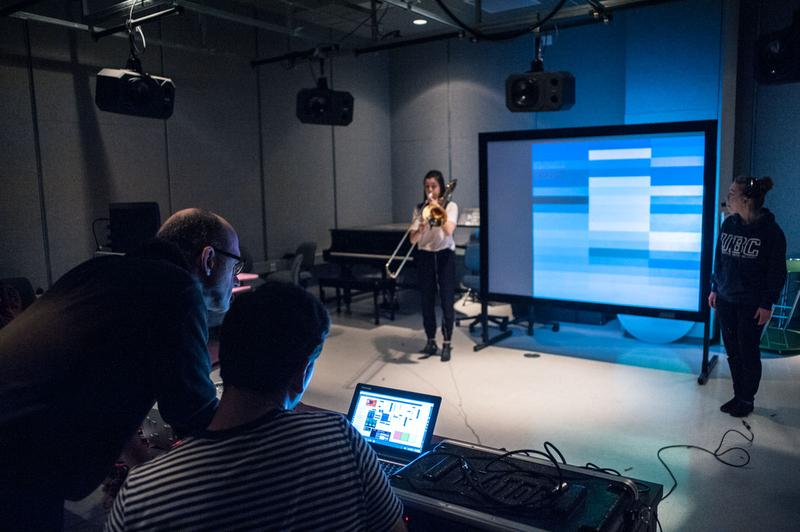 To set foot in Dr. Pritchard’s office is, as he put it, to step into a “hardware emporium.” Glowing monitors, electroacoustic equipment, speaker rigs and even an upright piano densely populate the room. Amid the clutter, an enthusiastic Pritchard coordinates the many moving parts of the UBC Laptop Orchestra.

“We started about five years ago,” said Pritchard. “It has been majorly successful – really, really successful.”

Unlike others orchestras of the same genre, UBC’s laptop orchestra does not just play taped sound clip pieces. Instead, students manipulate the sound in real time during performances.

“I have a particular aversion to what most laptop orchestras look like. It’s a bunch of people sitting at their laptops all coding and you cannot tell who’s creating what sound where,” said Pritchard. “It looks like everyone’s checking their email.”

The UBC Laptop Orchestra tasks students with coding a synthetic instrument that can respond to and be manipulated by various interfaces. Using joysticks, smartphones and motion sensors, students control the parameters of their instruments. It is even possible to influence instrumentation by displaying different colours to a webcam. According to Pritchard, the orchestra’s current focus is on generating music through gestures and dance.

“We’re interested in tracking two dancers at a time and having them interact. You’re used to the idea of a pas de deux at the ballet, but now we’ve got two dancers who control sound and image,” said Pritchard. “Normally, dancers have to react to music – here, they’re controlling music. We find this role reversal very exciting.”

Students in the UBC Laptop Orchestra come from diverse faculties — the ensemble is a mixed bag of engineers, musicians and dancers. As a result, the program emphasizes an interdisciplinary and experimental approach to composition. According to Pritchard, it is very much “a collaborative process between the programmer-composers and the dancers.”

As the dancers coax the sound out of the code, there emerges a distinctive sense of animation to the music. This intimate and upended relationship between music and dancer affords the audience much-needed insight into the creative process behind the eccentric compositions.

“If I can tap my foot to it, it's not music,” said Pritchard. “The structure sort of arises out of the material. It’s not like they’re working on sonata form, rondo form or variation form. We’re pushing the musical structures in other directions.”

Looking forward, the UBC Laptop Orchestra is hoping to collaborate with engineers and musicians from the University of Huddersfield in the UK. Using virtual private network channels, students from the two universities are exploring the possibility of exchanging data so that dancers in Vancouver could trigger a concert in Huttersfield. More immediately, however, the UBC Laptop Orchestra will be giving a 7:30 p.m. performance at Barnett Hall on December 9.