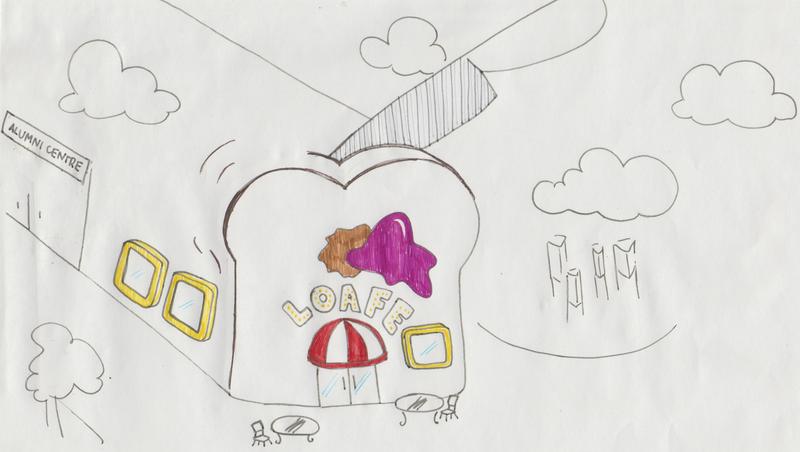 We called for your help and you all answered with vigorous enthusiasm. Apparently, there are countless ways to make Loafe's layout not a human rights violation, and with our thorough knowledge of interior design, aesthetics and human decency, we here at The Ubyssey determined this submission by our own volunteer Emilie Kniefel to be the best solution.

With its witty self-awareness and bold lack of conformity to UBC's standard glassy architecture, Emilie dared to suggest not only redesigning Loafe's interior but also the whole building in which it rests. The proposal would transform a structure that now looks like a rectangle that someone stepped on, into a larger-than-life replica of a loaf of bread, complete with knife, jam and patio seating.

We can only hope that those in positions to take action have the courage to make this bold change, not only for the benefit of Loafe-goers caught awkwardly between the barista and bar as they wait for their cappuccinos, but also for the good of all mankind.

Listen, I know that the layout of Loafe is horrible. But let’s be honest — who wants to subject themselves to more UBC construction? I don’t. I’m sick of walking all the way around Irving for no reason. And I can’t be deprived of my Smashed Avo Toast for more than a week, let alone a couple of months. So instead of designing a new layout for Loafe, I went for a new façade.

Most re-façadeing projects just entail a bit of scaffolding, so with my plan, Loafe wouldn’t shut down and I wouldn’t have to go even one day avocado toast-less. Plus, the payoff is so much better. I don’t know how anyone could mind being lined up while looking at my masterpiece. Look at how cute the butter pad windows are. Peanut butter AND jelly! A giant knife! What’s not to love?

To complete the look, plans are being drawn up for a fork adornment for the top of the giant waffle — otherwise known as Buchanan Tower. This is the future, people. The University of Brunch-Themed Construction. Embrace it.