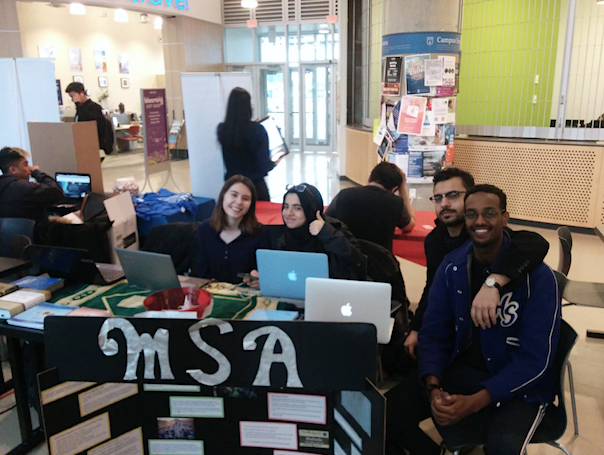 Last September, President Santa Ono voiced his support for all of UBC’s faith communities in a speech which addressed rising Islamophobic sentiments. However, he refrained from directly promising any significant administrative action to accommodate the increasing number of Muslim students on campus. The Muslim Student Association (MSA), which serves as a home and representative body for Muslim students at UBC, maintains that administrators have been helpful. However, the group still has concerns as they continue to grow.

The MSA hosts events such as “Islam Awareness Week” and “Chat and Chai” in order to open up discussions to a range of diverse opinions and experiences here at UBC. Executive member Meryem Katırcıoğlu explains that the club hopes to be a community-oriented space. The diversity within the community, as well as each student’s personal approach to their faith makes it difficult to be a representing voice for all Muslim students. This was demonstrated after a survey taken about student perceptions of Islam and the MSA had some people claiming that the MSA’s events were too liberal, with others suggesting that they were too conservative.

The club actively encourages non-Muslim students to come to their events. Executive member Nour Youssef says that although a lot of students on campus are tolerant, the MSA wants to use their events to bring people closer together and help people get over any misconceptions they may have. As a way to combat these misconceptions, club president Hamsa Mohamoud says that the MSA seeks to be a “resource of information for people who want to know about Islam.”

Mohamoud encourages students to come to events, explaining that the MSA not only provides a spiritual community for students on campus, but that “it becomes social, [and] helps with your education because [it provides a group of] people who want to learn.”

As Ramadan approaches, Mohamoud also voiced his concerns about prayer space. While Friday prayers are important to Muslim students all year, prayers become particularly significant during the month of Ramadan. Friday prayers at Totem Ballroom are becoming increasingly overcrowded and securing a larger prayer area has been a constant issue for the club in previous years.

Despite issues of space, the MSA is always open to new members. Executives stressed that the club is extremely non-judgmental, no matter what level of practice you are at. “We are welcoming towards people’s different beliefs and ideas… we want to have genuine conversations,” said Katırcıoğlu. “Nobody’s perfect, we’re all works in progress.”