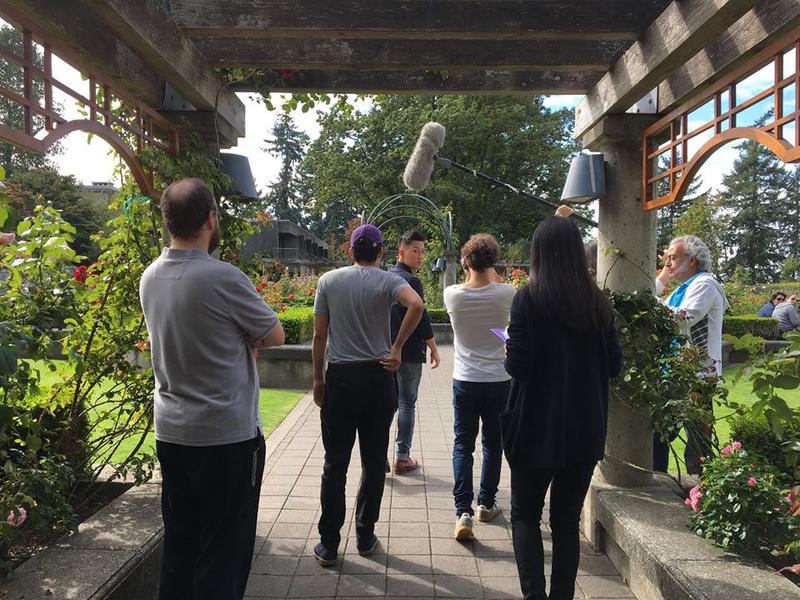 “What is standing between you and the life that you want?”

This was the question that UBC Professor Tom Scholte, originator and producer of the fourth instalment of the Naked Cinema project, asked his BFA students before they began their summer holidays.

In previous years, students have been instructed to come back to campus in September with a handful of characters they had encountered during the break, and it was from these characters that the storylines and themes of their feature length and Dogme 95-inspired film were made.

Launched in 1995 by Danish directors Thomas Vinterberg and Lars von Trier, Dogme 95 — dogme being the danish word for dogma — attempted to “strip” cinema of its artifice, all superfluous elements of film production that take away from the realism of the process and product.

When asked how he first became involved in the movement, Scholte reflected that Dogme 95 came about during a “time of return to a grittier, more natural and less cosmetic form of realism.”

Scholte views Dogme 95 as embedded in the wider DIY filmmaking movement, adding that at the time “there was an upswell of independent filmmaking in Vancouver, so when the Dogme 95 manifesto came out … it was a sort of extreme version of what many people were considering doing anyway.”

For Scholte, “Dogme 95 wasn’t new in a way, in terms of what it was looking for in cinema, but was just another way to wake people out of their blockbuster slumber — a return to the core ideas of character and story.”

The movement draws its roots from the European filmmaking movements of previous decades, such as the French New Wave and Italian neorealism. In many ways, Dogme 95’s extreme rules were made to be broken. The rules, referred to as “Vows of Chastity,” include the stipulations that shooting must never be done on location, props and sets must never be brought in, music must not be used unless it occurs where the scene is being shot, the film must not include superficial action, no special lighting is allowed and the director must not be credited.

In the first Dogme 95 film produced — The Celebration, or Festen — Thomas Vinterberg himself admitted to breaking at least two rules by covering a window due to lighting constraints. Likewise, a pivotal moment in Naked Cinema IV: Unspoken relied on the presence of a large amount of lollipops, necessitating the bringing of props to location.

This year, Scholte and his BFA students came back to campus two weeks before the term began and built the characters and stories for their film in an even more unconventional and bottom-up manner. The methods of the Theatre of the Oppressed — a doctrine and socio-political movement created by Augosto Boal, whose process requires a neutral party to be at the centre of theatrical proceedings — were highlighted. During these two weeks, all students involved with the film spent their time delving into personal pasts, collecting issues and experiences through cherished objects and memories.

Student director Linnea Ritland, whose stellar directing ability stood out among the storylines, called the experience “exhausting” and “culty.” Students were asked to think of a time of conflict in their life and then to make a sound corresponding to this memory. Howls and shrieks filled the room and students then organized towards the sounds that resonated with them. It was from these groups of sound-sympathizers that the three threads of the movie were built. Naked Cinema IV: Unspoken is centred around three couples and their interlinked stories of relationship turmoil, which at times border on melodrama.

One couple finds the untended wounds and unfulfilled desires of their past destroying their relationship and ending their engagement; a second is nearly brought to dissolution from the stress of a codependent younger sibling and a third is forced to come face-to-face with the unresolved effects of a miscarriage and unplanned pregnancy. Wedding rings are left on candle-lit tables. Co-workers, who are also jealous ex-lovers, gaze smolderingly at the camera and then storm out of frame.

For a film with the word “naked” in the title, there is surprisingly little nudity, as director Ritland jokingly pointed out. This is because Naked Cinema is inspired and attempts to abide by the rules of the Dogme 95 filmmaking movement and manifesto.

One of the central tensions of the Dogme 95 and Naked Cinema film production is knowing when to break the rules. For director and editor Christian Díaz Durán, the production had to focus on taking the ideas of Naked Cinema, but also ensuring that “it was something everyone could be proud of.”

The lollipop scene was among the most compelling in the film and acted as a nexus that tied the story lines together. Other rules were broken by accident, such as when Scholte was credited as director.

For Scholte, the biggest lesson that students and viewers can take away from Naked Cinema and Dogme 95 is that “in 2018, if you want to make a feature length film, then you have no excuse not to make one.”

Through excellent editing and directing, Naked Cinema IV: Unspoken succeeded in balancing the restrictions of the genre and creating an eminently watchable student production. Though esoteric film genres can often feel unaccessible, the raw emotion and humour presented by the actors and actresses of the film made up for the lack of soundtrack and costume in a surprising and effective way.

With the Oscars fast approaching, one might think that the Dogme 95 movement has been forgotten by mainstream cinema. Though no films made in the Dogme 95 filmmaking style have made it through the Academy Awards selection process this year or any other year, this does not mean that the movement has not affected the current world of art.

Thomas Vinterberg has seen wide acclaim for his film The Hunt (Jagten), which was nominated for Best Foreign Language Film award at the 86th Academy Awards. Although The Hunt does not fall among Vinterberg’s Dogme 95 filmography, Dogme-inspired frames and settings throughout the film are hard to miss.

Likewise, editor and director of this year’s Naked Cinema production, Christian Díaz Durán, who spent part of the summer break working and viewing movies at Cannes, reflected that 2018 Best Picture nominees like Call Me By Your Name draw from a long tradition of realist and neorealist European cinema, which contains elements of artistic empowerment and purity that movements like Dogme 95 emphasize.

Though the ethos of Dogme 95 may not be winning American awards anytime soon, its legacy lives on as it takes its place in the pantheon of radical and obscure filmmaking movements, ready to be drawn upon by any filmmaker with a camera, cast, crew and budget, no matter how small.