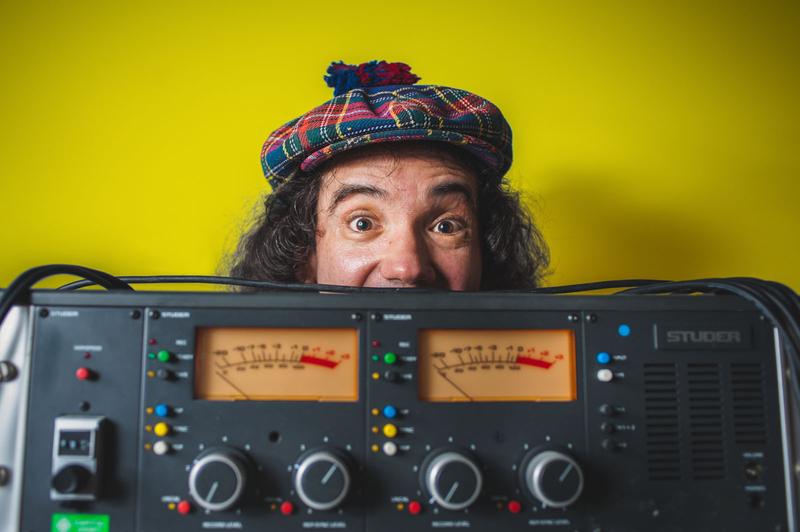 Nardwuar's Video Vault will be broadcast on CiTR on October 2. Photo Kosta Prodanovic / The Ubyssey.

When you think of successful interviewers, they usually have similar qualities -- they're easy to speak to, they can extract information from the most difficult of sources and they're usually relatively polite to their sources.

Nardwuar's interviews often confuse, intimidate or are misinterpreted by his interviewees. Common responses to his questions include "Fuck You" and being physically or verbally threatened. Although his start and passion is in music journalism, Nardwuar has interviewed politicians from Chrétien to Trudeau using his notoriously unorthodox approaches to interviews and very extensive research.

"When I first got to UBC, I didn't really want to participate in any extra curricular activities because I was president of my high school student council," he said. "One day when I was invited to a beer garden by a friend, it happened to be hosted by CiTR. People came forward and asked if we wanted to be involved. I took the membership form with no thought about joining."

Since that day, Nardwuar has been involved with CiTR and has used it as a springboard for his career.

"The next day, I felt like I had already committed by even taking the membership form. So I paid my membership fee and have been part of CiTR ever since."

In our interview, his first words were, "Can you hold on a few seconds? I'm trying to respond to this email about a lead on Stephen Harper because I heard that he's going to be in North Van in the next day or so."

Nardwuar hosts his show every Friday from 3:30 to 5 p.m. on CiTR, but was able to shed little light on his upcoming Video Vault show.

"The show is really going to be a curated video vault of my interviews and there are some tidbits that you as the audience haven't seen before," he said. "It's really a behind the scenes look at everything. It's going to be a mixture of video and commentary."

Having conducted so many interviews over the years, it's difficult to pick the standouts.

"If I had to pick one interview that I absolutely loved, it was my first interview with Snoop Dogg," he said. "When I was first asked to interview him, I didn't want to at all. I didn't know anything about hip-hop and rap and I felt really out of my zone since I was used to interviewing bands in the rock genre."

As his method of breaking the ice with the international musician, Nardwuar -- like any journalist worth his words -- did his research and found out that he was a huge fan of comedian Redd Foxx. Naturally the best way to bring this into conversation was to bring Snoop Dogg a Redd Foxx doll, and the interview was smooth sailing.

This was the start of the gift-giving tradition at the beginning of every video.

Advice for people hoping to follow in his steps?

"My advice is that I am not always right. These guys in the 90s came up to me and asked me if I wanted to be part of their video game company. I didn’t do it, but the company turned out to be EA and I was the guy that was totally wrong on that," he said. "I would say that if Nardwuar can do a radio show... or interviews, you can too."

After Video Vault what does Nardwuar have in store?

"I would love if some of these people who listened in would join CiTR and start creating shows and content to put out for UBC," he said. "I think that would feel like the ultimate success for me."

Nardwuar's Video Vault will be live in the new SUB on October 2 at CiTR, with Nardwuar -- live in person.