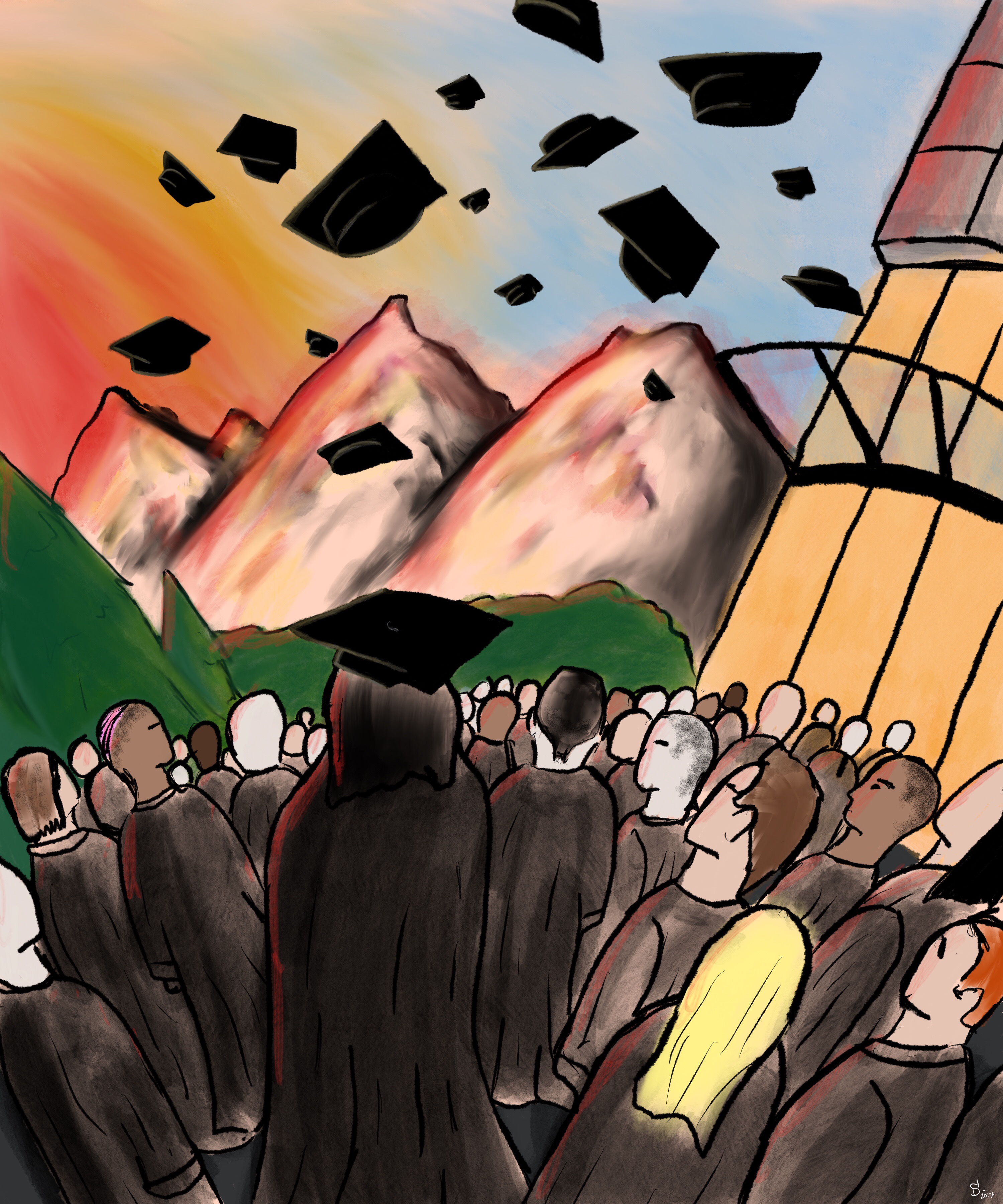 On graduating: Falling off of Hebb's roof and other misadventures

When I first saw I’d been accepted to UBC, I screamed so loud that a teacher in the next classroom ran over with a fly swatter and shouted, “WHERE IS IT?” After crying on the phone to my mum, my best friend told me to meet him in our high school’s dance studio, where all of my friends were waiting to run and hug me while “Celebration” by Kool and the Gang drowned out my sobs.

It’s equal parts comical and horrifying how I’m a completely different person from who I was five years ago — despite my terrible sense of humour enduring.

As a wide-eyed first-year in Totem Park, I was constantly amazed at how everyone seemed to like the same nerdy stuff I did. I could talk about music, movies and TV shows like I was never able to in high school. I swore right then that I was going to stay in Vancouver forever.

I made some of my best friends doing laundry while wearing ridiculous fleece polar bear pajamas, attending a parkour tournament, shopping for deodorant and other odd circumstances. After I befriended these brilliant people, I held onto them tightly and took extra care not to fall out of touch.

I didn’t drink, smoke, or hook up. When everyone went out to parties, I was stuck working part-time in a restaurant to pay rent and tuition. I watched as everyone had the quintessential first-year experience without me. I learned vicariously through my friends’ adventures, but I also made some mistakes of my own.

I was depressed throughout the tail end of high school and was surprised that moving to UBC didn’t solve all of my problems. After the honeymoon phase, I lay in bed for weeks at a time and didn’t attend class. The way I treated my first-year roommate during that time is unforgivable. I was an unhappy person and my biggest regret is being unfair to her.

Second year was immediately different. I was fresh out of a meal card and knew not to buy new textbooks. Walking around campus, I waved to familiar faces and felt a new sense of belonging that came with returning to campus. I discovered that home, for me, is defined as the place you come back to and UBC was quickly becoming that.

Compensating for first year, I stepped up my game and handed in polished assignments that I started days before the due date. This was a horrible decision and ultimately resulted in my disillusionment with grades and university in general. If the only difference between a carefully crafted essay and a product from a haphazard all-nighter is a B and B+, I’ll save my time and take the B.

Participation is important in a lot of English classes and everyone has a different relationship with the attendance sheet. I found myself making excuses to professors about my occasional absences, only to find they didn’t care. So I didn’t either. However, the professors who did care about whether or not I was there made me not want to miss their classes in the first place due to their energy and passion for the material.

Let’s face it, a degree as an English lit major is basically an expensive book club with all of the forced conversation and none of the food or wine.

Besides figuring out the game of university, I was even so lucky that year as to have one of my best friends move in with me at my sweet, 13th-floor view in Walter Gage. Whenever I think of this entire year in my life, the first memory that plays is how I spent many nights holding her hand at 2 a.m while she cried, struggling with her special, thick contact lenses that she wore while she slept. I remember how hard the floor was as I faded in and out of sleep, lying next to her as she knelt before the full-length mirror in the hallway and how it was all worth it when she could see clearly the next day.

Then I flew off to England to study abroad and live out another one of my dreams. I picked up an obnoxious accent, relearned how to cross the street a number of times, and went on walks (English version of hikes) every weekend. I loved it.

I was inspired everyday to try new things by two of my wonderful roommates — one of whom put up with my ramblings for weeks on end while we travelled throughout the UK and Switzerland in cramped hostels, and the other whose wit and art has challenged me to be creative in simple everyday acts.

While I adored my new friends, I dearly missed the ones I’d left in Vancouver. For Christmas, each of my friends at UBC — who didn’t know each other — met and had a photo shoot dressed in ugly Christmas sweaters at Nitobe Gardens. Finding those photos in the mail is the greatest gift I’ve ever received. To my friends who are abroad right now and students reading this considering exchange — do it. No matter how much you think you’ll miss your friends or are scared that they will forget about you, they won’t. I promise.

A word of caution though as I inevitably became that cliché person who can’t shut up about their year abroad. Up until a few months ago, it was the happiest I’d ever been and memories replayed in my head every hour. I didn’t want to leave my second home. I fought tears whenever people asked if I was coming back to Vancouver because if it wasn’t for my financial situation, I might not have.

I returned to campus for my fourth year to find that nothing had changed. Yes, more construction fences had popped up and the Nest was open, but it somehow felt exactly the same. I experienced intense reverse culture shock and my father announced that he had leukemia just days after I landed. I didn’t tell anyone about either until months later.

I walked into The Ubyssey office and although I’d been writing there for years, it was the first time that I felt welcome into a community and was quickly hired as copy editor. My life soon became a numbing back-and-forth from my bed to The Ubyssey office until I found myself spending more nights at the latter than I care to admit.

It was a safe place where I was certain I could blast music and roll around on chairs without being observed or heard. My best memories of that year were blaring David Bowie’s “Starman” and Green Day’s “Jesus of Suburbia” while I cleaned, mopped, and organized every corner of the office.

When my coworkers came in the next morning and voiced their confused amazement at the spotless office, I lied and said that it wasn’t me. I’ve tossed around a number of reasons for this lie, but if I’m being honest with myself, they’re all bullshit. I just wanted that night to belong to me and not share it with anyone — plus their confusion was too funny to watch.

Spurred to activism in the wake of the Pride Flag burning of 2016, I recruited one of my best friends to join me in painting the cairn rainbow and re-flying the Pride Flag. After discovering that the flagpole was too damaged to use again, the two of us became so politically inclined as to climb up to multiple roofs around campus and hang Pride flags from each.

Few people saw them though as the university took them down early the next morning. This is also how I managed to fall off of the roof of Hebb after scaling two stories, and yet was luckily still able to walk away from a night of vigilante justice with only two columns of black bruises coating my shins.

Most of my adventures are born from restless academic angst and all of them special because they were shared with people I care about.

Truthfully, my friendships were never the same after I got back from England and I realized that my time belonging to UBC has an expiration date. Time and proximity warp all things, no matter how strong you think you are to resist. But it doesn't ruin them as I've learned that change is not synonymous with destruction.

For me, UBC isn’t defined by lectures, essays or construction, but rather its people. And people are always in flux. We are all busy and we are randomly bound by classes, social circles and maybe even offices. Soon, visiting campus will feel like driving by an old house you used to live in. It looks the same, but there’s another family there — not yours.

In the next two weeks, all three of my jobs will come to an end in sync with my last days of class. I can already see my schedule dramatically thinning and I’m quietly terrified of having nothing to do. With whatever spare time I crawl across however, I want to thank everyone — my professors, family, classmates, coworkers, friends and you… a stranger reading an article in The Ubyssey.

I wish my diploma noted how I’ve had 36 roommates in nine different places in the last five years, detailed how I finally learned to ride my bike with no hands after crashing into multiple people on Main Mall or illustrated the only route to sneak into the canopy walk of the UBC Botanical Gardens at 3 a.m.

Or described how to hook up your laptop to a lecture hall projector to stream a movie night on the big screens, mentioned the bruises I got from storming the wall or instructed how to build the perfect Wreck Beach bonfire.

But it won’t, and none of those things are prerequisites for job applications.

Rather, these are the things that give my degree and future career value. All these small adventures and challenges have pushed me little by little to do more crazy things like take up rock climbing, scuba diving, and even moving to Japan.

Just imagine a world in which you get paid for doing less work than you already do in university! Yes, I'll miss my life here terribly, but I'll carry it with me in all the little phrases and contagious idiosyncrasies that I've adopted from people I probably spend way too much time with.

Goodbye, UBC. There's honestly no rain I'd rather have soak my socks, no construction I'd rather detour around, and no classes I would have rather skipped. Thank you.