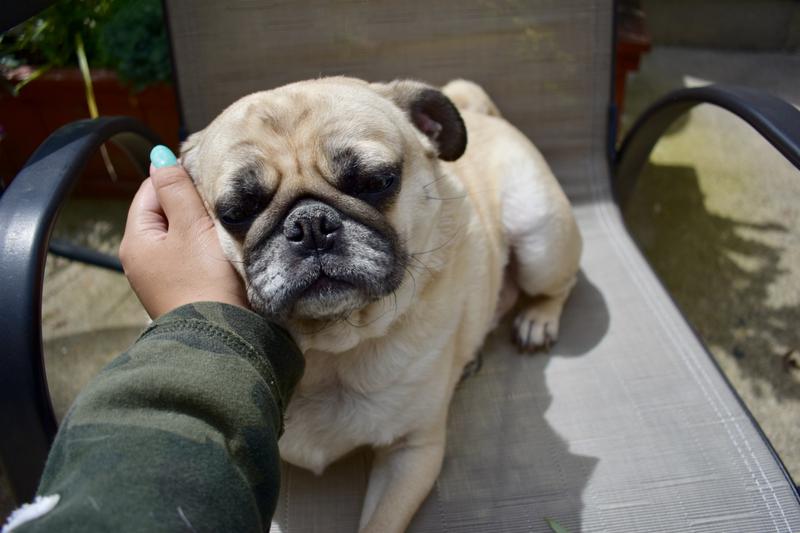 Who's a good dog? Lalaine Alindogan

Like most people living across the globe from campus, much of my time in quarantine last year was occupied by endlessly scrolling through Reels, Instagram’s latest annoyingly addictive feature. I came across several makeup tutorials, choreographed dances and words of inspiration in these 30 second videos. However, the Reels that stayed with me featured heartwarming moments between people and their pets. Whether it was a Golden Retriever unexpectedly giving his owner a hug or a German Shepherd slyly demanding a foot rub, those videos made my day (as well, I’m sure, as that of many other animal lovers across the world).

Recognizing the impact that pets can have on our lives, UBC organized the webinar, Our Animal Friends: Caring for yourself and the animals in your life, on Tuesday, June 8. The virtual event was presented in partnership with the UBC Faculty of Land and Food Systems, the UBC Faculty of Arts and the UBC Okanagan School of Education. Our Animal Friends aimed to help attendees feel more connected with their pets and take better care of their pets’ wellbeing, as well as their own.

The interactive webinar was moderated and hosted by adjunct professor, UBC School of Journalism, Writing and Media, Francesca Fionda. The session kicked off with Dr. Alexandra (Sasha) Protopopova taking the virtual floor and sharing some intriguing facts about pets and the kinds of relationships their owners share with them. Protopopova is an assistant professor in the Animal Welfare Program at UBC and the NSERC/ BC SPCA Industrial Research Chair in Animal Welfare. She is also the proud owner of a ten year-old Australian Shepherd from France whom she describes as “a clever dog with very strong opinions.”

Protopopova shared that people have, unsurprisingly, reported higher rates of mental and physical well-being as well as greater companionship after adopting pets during the pandemic.

Interestingly, early reports showed that pandemic pets were being adopted to take advantage of “the outside time” that pet owners enjoyed while walking their dogs amidst strict lockdown restrictions in many countries across the world. However, according to Protopopova, later data refuted these claims by citing more free-time during the lockdown as the primary reason behind increased pet adoptions.

Animal shelters in the United States and Canada are increasingly recognizing that lack of social support is causing humans to unwillingly abandon their pets. Instead of functioning as a last resort for these pets, some shelters are providing support to owners in the form of services, such as food security and behavioural and foster programs. This equips owners with the necessary resources to keep their pets for as long as possible, thus effectively reducing cases of animal surrenders, saving both humans and animals from the avoidable pain of separation.

“[W]e now have a vision to transform what it means to integrate companion animals into society,” Protopopova said.

Dr. John-Tyler Binfet, was the next presenter at the webinar. Binfet is the director of UBC’s Building Academic Retention through K9s program, as well as an associate professor in the Faculty of Education at UBC’s Okanagan campus. He spoke about the guaranteed crowd-pleasing program involving therapy dogs that he runs at UBC’s Okanagan campus. Building Academic Retention through K9s, which brilliantly works out into the acronym B.A.R.K, aims to reduce stress and feelings of homesickness that students studying on campus face.

B.A.R.K has a stable of about 60 dogs and primarily organizes drop-in sessions as well as regular outreach programs and community events on campus. The group also conducts a weekly therapy program with constables at the Kelowna RCMP precinct.

Binfet said that B.A.R.K has, “a strong commitment to rescue dogs and . . . [aims] to debunk the myth that just the purebred golden retriever makes a good therapy dog.”

Unfortunately for everyone eagerly waiting to know, there are no plans to extend the B.A.R.K program to UBC’s Vancouver campus as of now. However, Binfet did mention that the campus organizes a few sporadic interactions every once in a while.

The last 20 minutes of the event were dedicated to answering the many enthusiastic questions posed by those in attendance, ranging from how to tackle pet separation anxiety after the pandemic to tips on controlling the food intake of feline companions without feeling guilty.

The paws-itively delightful event ended on a lighter note as Protopopova expressed that, “humans and dogs and cats have [been living in harmony]. . . for hundreds and thousands of years successfully.”

“We have co-evolved – these animals are part of our natural history.”

This article has been edited for clarity.