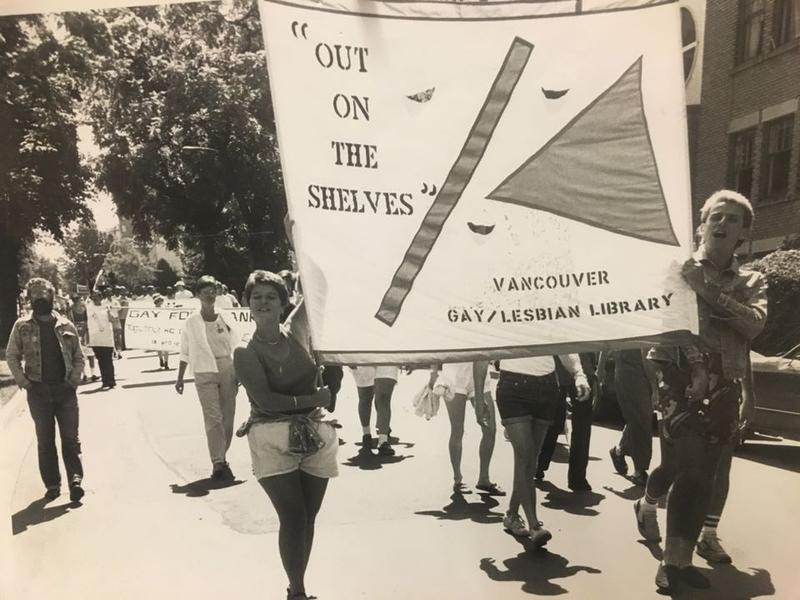 A photo found in their archives, which now hangs on the library’s wall. The date and photographer are unknown. Courtesy of Out on the Shelves

“The queerer, the better” is the mandate at Out on the Shelves. What started as a “gay library” in 1989 has been shuffled from home to home over the years, including Qmunity in downtown Vancouver and some cardboard boxes in a few storage facilities. Now, it has taken residence in the Nest after a recent collaboration with Pride UBC.

Library co-coordinators Cinders (Lucinda) Murray and Casey Stepaniuk took over the project in May 2016.

“The former coordinators … were asking for people to give them a chance to step back and recuperate,” said Murray. “They’d had a pretty intense couple of years and so they needed to take a backseat for a little while. Casey and I volunteered and we suddenly found ourselves with a library.”

At the time, the collection was boxed up in garages around the city. “The volunteers did some very heroic work with rescuing all of the books that they could … while they undertook the perilous game of finding real estate in Vancouver.”

When Pride UBC told them that there was library space available to use, the librarians took the chance to move the collection out of where it was being stored and begin to re-establish Out on the Shelves.

“We sort of got to refine the vision of what the library was and that was really cool,” said Stepaniuk.

One of the most interesting things about the collection is the mandate that it follows. At Out on the Shelves, all of the books need to contain at least 60% queer content. That means that books written by queer authors don’t automatically make the cut — the narrative itself has to be primarily LGBT2QIA+.

However, you can find more than just LGBT2QIA+ books within the space. Out on the Shelves has also taken the initiative of managing collections for the other groups in the AMS Resource Centre, including: Colour Connected, the Social Justice Centre, the Student Environment Centre, the Women’s Centre and Pride UBC itself.

“We’ve actually been able to work really closely with Pride, which is great,” said Murray. “We asked them what the best working relationship would be for us and them in the space, and they really liked the idea of us curating their collection … rather than having two separate LGBT collections.”

Both coordinators have been students at the UBC School of Library Archival and Information Studies (SLAIS), with Stepaniuk having graduated in April and Murray still attending.

Murray said that they are hoping to collaborate with SLAIS in the future through professional experience projects, which could be recognized as courses and would help librarians-in-training work firsthand on coordination, collaboration and cataloguing.

Moving forward, they would also like to expand their collection to suit the needs of “anyone in the wider campus community.” Murray also spoke of applying for grants and funding, the possibility for outreach events and intersecting with Pride Week for their official launch in January. However, these are all next steps for a library still trying to establish itself within the space.

“Come and explore. See where it might take you,” Murray suggested. “When I was an undergrad, I was very much still learning to understand my own queerness in relation to narrative and … this sort of thing would have been invaluable for me. Having a space to dream and explore and discover is incredibly important. You’re not just going to get the ‘coming out’ or ‘bullied’ narrative here — we’ve got all the stories! And, we’re waiting for [the ones that we don’t have] to come in.”

Out on the Shelves accepts both monetary and book donations and offers volunteer opportunities via their website.