PEP is a unique blend of sounds and cultures 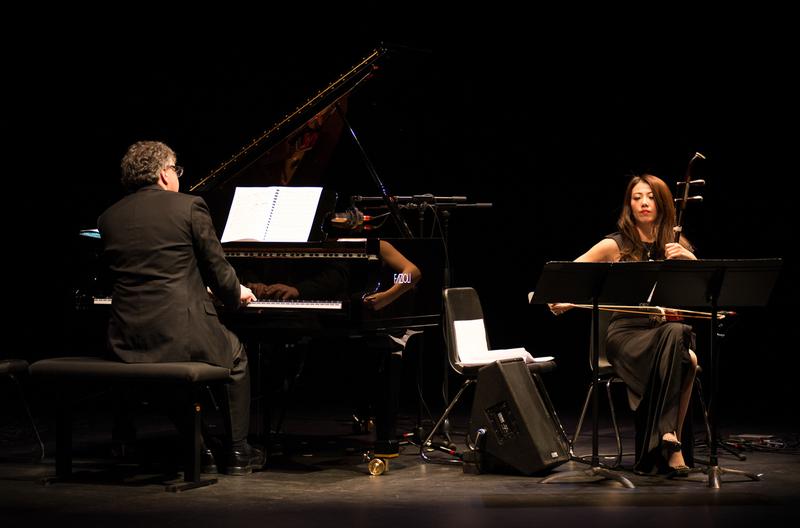 Last Tuesday, the Piano & Erhu Project (PEP) filled the Fox Cabaret with a unique blend of sounds and cultures in their last concert before their upcoming tour in China. The concert was the first of a series of weekly live performances programmed by Music on Main.

The erhu, also referred to as the “Chinese violin,” is a bowed string instrument with a soundbox traditionally encased in python skin. With only two strings, the erhu has a seemingly simple construction, but produces a complex, beautiful sound that has been said to mimic the human voice.

Featuring Corey Hamm on the piano and Nicole Li on the erhu, PEP set out in 2011 to explore the musical possibilities of this unconventional instrumental pairing.

Noticing that the existing music written for piano and erhu leant towards traditional styles, Hamm and Li chose to commission over 50 different contemporary composers, musicians, and friends to write new compositions for piano and erhu performance. Since then, PEP has released two albums and is gearing up to bring their music on tour to China, Canada, and the United States later this year.

Part of what made the live concert experience intimate and special was being able to listen to the performers preface their pieces with context and backstory. Befitting the nature of the collaboration, each piece was introduced in both English and Mandarin, by Hamm and Li respectively, and bilingual listeners had the privilege of hearing both performers offer their own perspectives on the origins of each composition.

While introducing PEP, David Pay, the Artistic Director of Music on Main, commented on how appropriate it was that they should be in Vancouver, “where China is to the East and Europe is to the West” and where the music of two different cultures combines. The music produced by PEP is a great fusion of Chinese and European cultures, with both traditional and contemporary elements. The fact that each piece is composed by a different artist makes the diversity of the repertoire truly unique.

Hamm and Li opened the concert with the lyrical and melancholy "along the riverrun” by Scott Godin, which carried the audience on a journey that left behind a strong sense of nostalgia. Brian Cherney’s “Two Remembrances” had Li alternating between playing the erhu and rainstick, and Stephen Chatman’s “Remember me, forever” reminded viewers that beyond the keyboard, the piano was both a string and percussion instrument, utilizing objects placed between the strings to create an unexpectedly distorted sound.

Standing out amongst the newly commissioned pieces was “Birds and Warped Time II”, originally written by Somei Satoh in 1983 for the piano and the violin. Offering a vibrant and exotic sound, the erhu filled the part well. Illustrating the versatility of the pairing, the set closed on a decidedly jazzy note with Roydon Tse’s “Blues n’ Grooves.”

Not unexpectedly, the erhu often stole the spotlight, carrying a piercing melody line while the piano set the tone in the background. Other times, a conversation was struck between the two instruments, echoing and responding to each others’ phrases. Throughout the night, Hamm and Li consistently complemented each other with their instruments, striking a beautiful balance between the atmospheric piano harmonies and rich erhu tone and leaving one wondering why this instrumental pairing is not heard more often.