Performing in a pandemic: How clubs are 'thriving' online 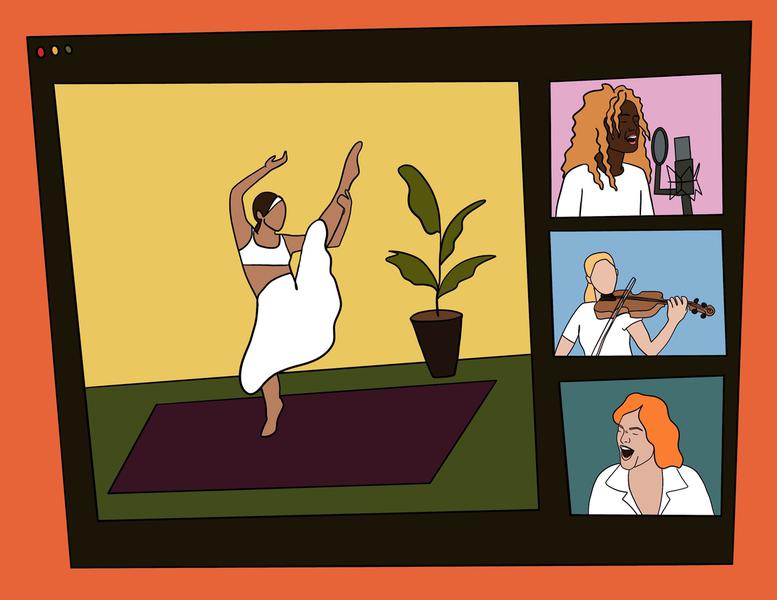 “It’s been difficult, but we’re trying our best to adapt especially during these times.” Lua Presidio

In September 2019, Himmet Pawa walked through buzzing crowds of new and returning students filling up the long road of Main Mall for Imagine Day.

As he walked past booths, he spotted a group, bursting into song and filling their section of the street with a kaleidoscope of timbres and sounds — that group was UBC A Cappella.

As a musician himself, Pawa found himself hooked right away and quickly auditioned for the Northwest Collective (NWC), a competition group that represents the club in the International Championship of Collegiate A Cappella (ICCA) tournament.

A year later, Pawa is now co-musical director of the club he auditioned for. But due to the COVID-19 pandemic, this year has not been like the last. As a result of physical distancing restrictions and the lack of a regular close-knit social environment, his group has faced obstacles while transitioning to online activities.

When the university shifted to online classes, the club was forced to cancel auditions and concerts and ban in-person rehearsals and activities.

Pawa describes the club as large, yet tight-knit, as it gives members the chance to meet many people and make friends outside of singing. However, practising for international competitions such as the ICCA tournament has brought about new challenges.

“It’s harder to communicate or really connect with people that are outside of [our own group] this year … We can’t have our winter concerts, but we’ve tried to move things online. It’s been difficult, but we’re trying our best to adapt especially during these times.”

Despite changes, Pawa and Dubuc view this online transition as an opportunity to challenge themselves in a different way as the ICCAs transformed into just a four-minute music video submission that judges creativity and editing skills in addition to performance.

Producing a four-minute video is very different from the usual performance the group usually put on for the competition. Typically the act is 12 minutes long and is performed live in front of a large audience and judges.

“I think that really pushes us to excel in different ways,” noted Pawa.

“Although it’s not ideal, it’s given us musical skills that are beyond what we would usually know. For example, learning to record audio or edit video.”

‘Performing for a black screen’

UBC A Cappella is not the only performing arts club that faced technological adaptations during the pandemic.

The UBC Music Initiative (UMI) went from hosting large-scale, in-person events, where members got to frequently interact with audience members and other performers over club socials, to hosting monthly events on Zoom.

Prior to COVID-19 restrictions, along with collaborations with other clubs and organizations at UBC, UMI also connected with hospitals and retirement homes, setting up performances for patients and seniors. Due to obvious concerns about the spread of the coronavirus, volunteer community outreaches weren’t possible this year. Consequently, UMI could only send a string of recordings to senior homes and hospitals.

In this transition, UMI President Cherise Kwok says their audience numbers decreased by three times and technical difficulties have arisen.

“Most attendees prefer to mute themselves and turn off their camera,” said Kwok, “At times, it can be compared to performing for a black screen which is a far cry from a live audience … We cannot perceive the audience’s reaction.”

Andrea Hernandez, VP marketing for the UBC Musical Theatre Troupe (MTT), is in charge of making all club information accessible online and publicizing the club’s events, workshops, recruitment and shows. As the only musical theatre club at UBC, Hernandez describes MTT as a “welcoming, wonderful family of super enthusiastic people” and a great way for people to showcase their talents.

Before, MTT held cabarets, open mic nights, and 24-hour musicals — where the audition, casting, rehearsal and show all would occur within a 24-hour period. This past year, MTT has found itself deprived of the thrills of intense audition processes and theatrics — as a result, the number of events has been significantly reduced.

One of Hernandez’s goals as an executive for the last couple of years has been to create accessible learning opportunities for people in theatre. She’s attempted to achieve this by running several workshops in both theatre and dance.

“We are striving ... to involve people, to educate people and to create leaders for the future of this club,” said Hernandez.

Hernandez describes how online rehearsals and productions involve making dance videos accessible for learning. She records scenes for the final product, which a hired videographer edits.

Despite the interruptions of COVID-19, student musicians and performers of UBC clubs remain equally enthusiastic about their craft, continuing their commitments to projects and sharing the light of their art through darker times.

“We really try to emphasize that it’s a big commitment when people join. So when they do, they tend to stick it out through the term,” said Hernandez, noting that MTT reminds its performers, crew members and general members each rehearsal that it prioritizes their mental health.

The pandemic hasn’t stopped Pawa from singing as he has begun learning how to use recording equipment and digital audio workstations to work on his own music.

When asked if NWC members have struggled to stay active, Pawa and Dubuc say that everyone has been very committed.

“I think in the end, we’re all like-minded in the sense that we’re very eager to reach the goal at the end of the year: competing in the ICCAs and seeing ... all the hard work,” said Pawa.

Despite struggles to get more attendees at Zoom concerts, Kwok says that UMI hasn’t had many difficulties recruiting performers for their events.