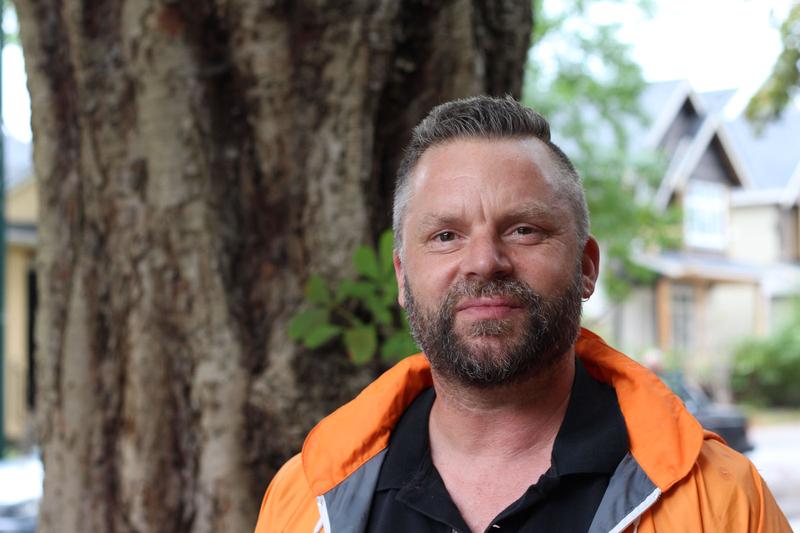 Influences to Steudel's poems came from the biggest energy points in his life -- his family and the environment around Vancouver. Photo Olamide Olaniyan / The Ubyssey.

Mount Robson looms in vintage postcard sepia from the cover of Vancouver poet Jeff Steudel’s debut book, Foreign Park. Steudel’s book begins here, at Mount Robson, close to the headwaters of the Fraser River. The poems follow the river, both symbolically and geographically, until the water meets the ocean here in the city.

Ecology and domesticity are inseparably interwoven in Foreign Park. “The poems came from ... places where the energy is in my life, and what I think about. And that is family and the environment and how those things intersect,” said Steudel. “Our relationship with nature is sometimes very similar to the relationships [we have] with other people and with ourselves.”

Steudel is an active outdoorsman, and though he grew up on the leeward side of the mountains -- in Edmonton -- Foreign Park is entirely influenced by his current west coast life.

Steudel is a graduate of UBC’s education program, preceded by a BA in English from the University of Alberta, and now teaches high school. It was his teaching career that was the catalyst for his foray into poetry. “I was teaching a creative writing class and I just started writing,” Steudel recalled. “I was like ‘Okay, well, if I’m asking you to do this, I’ll see if it works!’”

Steudel had previously won the Ralph Gustafson Poetry Prize, and been a finalist for the CBC Literary Awards. Bryan Kaufman of Anvil Press approached him about putting together a collection of poems for a book. Then, the concept for the collection began to take shape with the help of local literary Zsuzsi Gartner, who inspired Steudel to align the poems with points along the Fraser River.

The title of the collection is from the Rainer Maria Rilke poem, “In a Foreign Park.” While Rilke’s poetic structure influenced Steudel’s own, it is the concept of the foreign park derived from our current ecological situation that Steudel explores through his poems.

“[The poems] are political in terms of the environmental view. And I think the conservative government are almost environmental terrorists ... things are being pushed through in a thoughtless way, in which, really, we find ourselves in this foreign park, a foreign environment.”