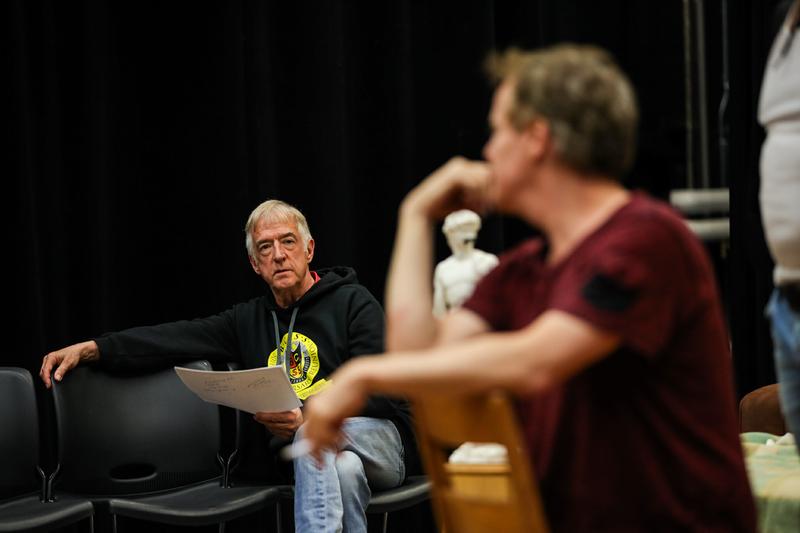 For a challenge, Heatley and Zotter decided on performing Hosanna as his thesis. Salomon Micko Benrimoh

Just in time for Congress of the Humanities and the Social Sciences Conference, UBC Theatre and Film Department is debuting their production of famed Canadian playwright Michel Tremblay’s hotly-debated play Hosanna.

Hosanna tells the story of Hosanna, a drag queen in Montreal in the early 70’s. The play takes place over the course of a Halloween night after things have gone horribly wrong for Hosanna at the drag bar. The play only has two on stage actors, with Zotter in the titular role and external actor Joey Lespérance playing the role of Hosanna’s lover, Cuirette.

UBC Theatre and Film rarely has MFA Acting students, so the project was especially unique for the department. In the case of Hosanna, Zotter came to the department with a proposal to investigate the acting process at a graduate level.

For a challenge, Heatley and Zotter decided on performing Hosanna as his thesis and Zotter was open and enthusiastic about the role.

“Why not go for the beast of all beasts? And it's one of those roles that really just dares its actor to punch depths,” Zotter said.

Because the play is character-driven, Heatly said the hardest part of directing has been balancing the two characters’ relationship.

“The challenge has been to try to find the nuance within the relationship ... Although they're hard on each other, they're somewhere in there, there is a real care for each other,” he said.

The role of Hosanna can be very challenging and isolated, especially as the character has a 40-minute monologue.

“The onus is even more precise and kind of microscopic because the focus is so there, so any second of disconnect is on display,” said Zotter.

Within the past few years, Hosanna has come under scrutiny for potentially perpetuating transphobic ideas — an issue especially worth discussing since Congress is expected to draw nearly 8,000 academics to campus.

Heatley and Zotter acknowledged that these concerns have come up throughout the production, but for Heatley, this play isn't about gender issues.

“We're looking to focus on the business of personal identity, rather than that it has anything to do with real gender identity,” he said. “It's not a play about gender confusion. It is a play about ‘How do I end up being true to who I am and how I feel?’”

Zotter agrees that the play is much more about living with an alter ego than a discussion of the role of gender.

“It's like the roles we put on for society to see that empower us, but as a facade we live behind … It just so happens that Claude finds power as playing this woman who's Hosanna,” he said.

When asked about the relationship between Congress and the production, Heatley believes that this is a chance to introduce a dialogue on the issue.

“The theme of [the conference is] ‘Circles of Conversation’, so to me, it's an opportunity to open that circle of conversation around identity and gender identity, and there's no content in the play around anybody who's transitioning.”

Hosanna runs from May 30 to June 8 at the Dorothy Somerset Studio. The production features a mature content/nudity/scent warning.