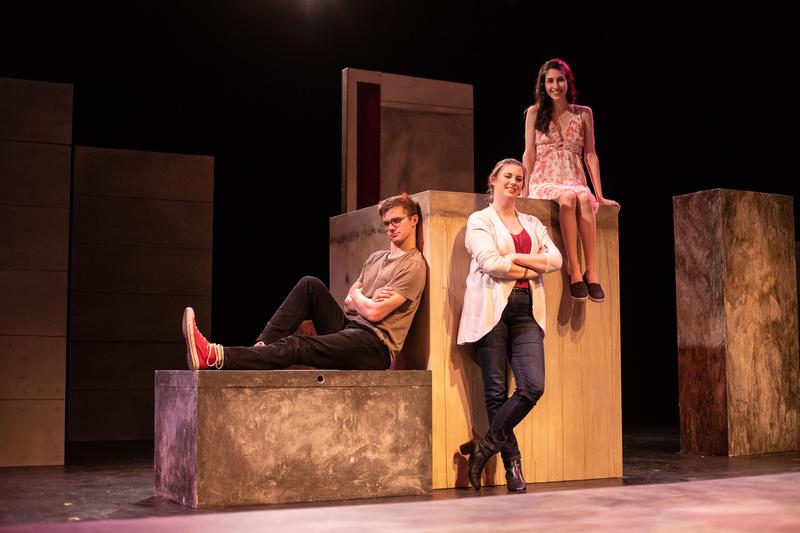 After a year of productions exploring the past, Revolt. She Said. Revolt Again. looks to be a refreshingly relevant play about feminism and the specific type of rage that can incite revolution.

Revolt. She Said. Revolt Again., written by British playwright Alice Birch, was first performed by the Royal Shakespeare Company in 2014. Director Sloan Thompson explained that Birch was inspired by the “SCUM (Society for Cutting Up Men) Manifesto” that was written by Valerie Solanas in 1967, a year before Solanas shot painter Andy Warhol.

“Solanas’s solution to the problem of patriarchy was … basically just [to] shatter all the systems of the world. And the last thing that she proposed was, ‘We need to eliminate all men,’” said Thompson.

“It’s about all these systems that are put in place,” said actor Aidan LeBlanc. “It’s awful things that men do, but it’s not so much, ‘Look how bad these individual people are,’ as it is taking a step back and going, ‘Hey, this is a situation that’s really common and happens a lot. Why?’”

Revolt doesn’t offer a solution to the problems that its characters face throughout the play, the situations that women find themselves in every day. Instead, Revolt is a series of self-contained, separate stories that collectively show “a much more complicated and nuanced portrait of this world,” said Thompson.

The show also invites the audience into a conversation to investigate how certain behaviours and phrases have been normalized, for better or worse. For LeBlanc, those conversations have spilled over from the production process into his own life. He’s become a lot more conscious of whether everyday language to him is genuinely respectful and non-judgemental to others.

“Discussing language is such a big thing in this show ... I’m much more aware of what I say,” he said. “‘What am I saying right now and how does that affect people?’”

Thompson echoed the sentiment, describing how the actors texted her asking to grab coffee to chat about their characters and the play.

Part of what makes this play so unique is the ambiguity built straight into it. There are no character names, nor ages, with speaking parts broken up in the script by dashes. As set designer Emily Dotson put it, “There is no set, there is no time, there is no place.”

As a result, Thompson, the actors and designers had a lot of freedom to do what they wanted, while remaining true to the playwright’s intent.

“That can be really tricky as an actor because then you’re blurring the lines between character and actor,” said Ava Safai, a BFA student acting in the play as a part of a 12-person ensemble.

“The most challenging part was making choices really [because] with great freedom comes great responsibility.”

Thompson worked with the actors to solidify the details and figure out what felt true to the dialogue in a process she called a “radical democracy.” Despite the messiness of navigating many distinct voices through difficult content, she believed the final product was worth it.

That ambiguity made set designer Dotson’s life much more complicated, but also much more exciting. In fact, the script explicitly says that there is no set.

“This is such a text-important show that to try to distract the audience with other things other than what the actors are doing is a disservice to the show,” said Dotson.

The only time the script references any kind of atmosphere is in the word “wasteland,” so she wanted to create a set that felt like “something that you can’t grow anything in.” She also wanted to “physically show the breakdown of something,” and eventually, with the help of a discerning assistant, hit upon the idea of creating a Jenga-like structure with movable boxes.

“As the show goes on, we’re throwing them or peeling panels off of them or destroying them, and instead of building something that could potentially be nice and we could use for something else, we’re breaking it down into chaos.”

Revolt also features an unusual feature for the Frederic Wood Theatre — a “thrust,” which extends the performance space into the first two rows of the audience from the normal stage. The idea for this configuration came from the discomfort Dotson said she felt while reading the play, and a desire for the actors to interact with the audience.

“A big part of the show is the shock value of taking the internal emotions of the actors and like physically seeing them,” Doston explained. “We wanted the audience members to have the ethos to understand what they were going through.

“The best way to do that is invading someone’s personal space.”

What this play comes down to is not the first half of its title, but the second. The “again” is a conversation starter about hope, particularly in a time where being politically conscious can feel exhausting.

“How do we maintain hope? How do we not just throw up our hands and say it’s too big for us?”

Revolt. She Said. Revolt Again. runs from March 12 to March 28 at the Frederic Wood Theatre.