Written by Zubair Hirji and Emma Livingstone
May 1, 2019 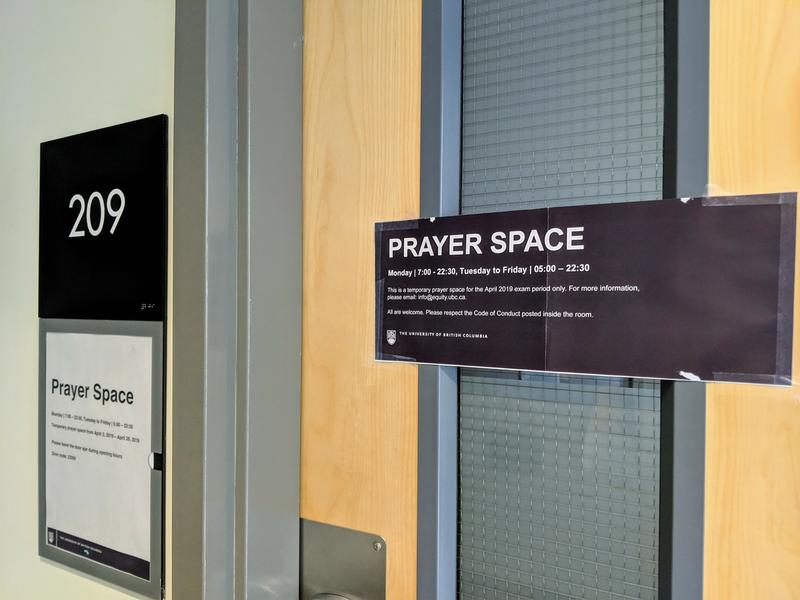 The Prayer space was open for the 2019 Spring exam period and a trial basis in December. Zubair Hirji

Over the recent exam period, the UBC Equity & Inclusion office added temporary prayer space for Muslim students on campus in the West Mall Swing Space. This room was in addition to a 24-hour space in Brock Hall Annex and a space in Marine Drive Residence that is only open on Fridays.

The West Mall space was created in response to multiple requests from students for more prayer spaces on the west side of campus. Students who spoke with The Ubyssey welcomed the additional space.

In addition to simply providing an extra place for students to pray, the temporary space is more comfortable to pray in. Affan Bhandakya, a Muslim Students Association executive, said the new space had more ventilation in comparison to that of Brock Hall. The space also included a sink for students to use and was more organized.

Despite many pros, the students also expressed a few concerns with the West Mall Swing space. For instance, it does not take into consideration cultural aspects like the lack of space for ablution — a place for cleaning hands and feet before prayer — which is available at Brock Hall Annex.

Students were also under the impression that it would become a permanent fixture for community use, when the space was first proposed to them. They tried to increase their usage of it to show UBC administration that a demand was present.

“What we thought was that if we use it more often, we’d receive a permanent prayer space. And we use it to the best our abilities,” said Bhandakya.

Students added that the spaces become crowded during the Friday prayers and can create a fire hazard with people blocking doorways.

“That prayer specifically is obligatory for Muslims and the Muslim community, and since there's a huge population of people coming in it becomes a fire hazard for people outside,” said Bhandakya.

Equity & Inclusion, the UBC office responsible for the prayer space, said it was aware of the need for more prayer space.

“We knew the demand for additional space was high, and we worked with campus partners to address the need,” said Tracy Wideman, director of partnerships and organizational strategy at Equity & Inclusion, in a statement to The Ubyssey.

When asked about the issues of overcrowding and the potential fire hazard, Wideman said the office is working toward a solution.

“We understand that the prayer space room in the Brock Hall annex is regularly and highly used by students and that there is a need for additional campus space. We are actively working to address various prayer space needs with campus partners, including Muslim student groups.”

In generally, all the students The Ubyssey spoke to regarding the new space were very happy to have a new space even after considering any drawbacks.

“There are a lot of pros and cons,” said Bhandakya. “Primarily pros for the West Mall Swing Space.”