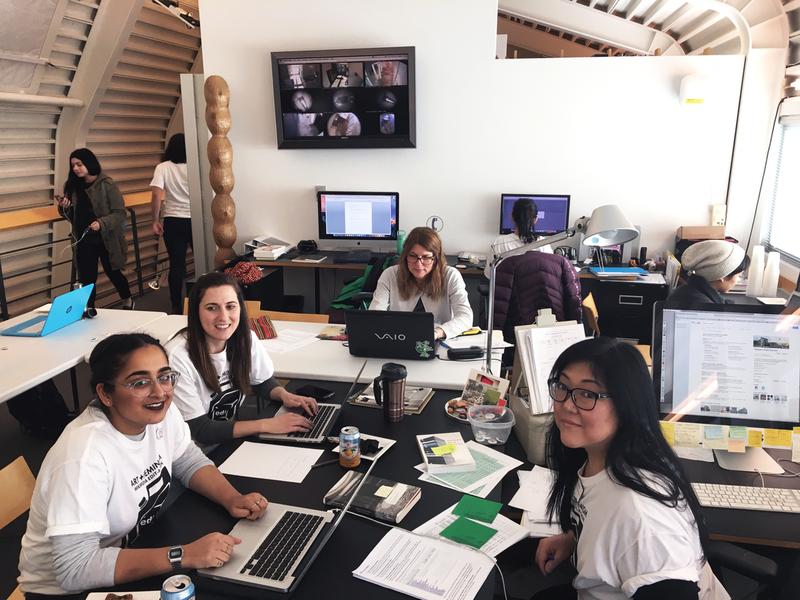 UBC’s Morris and Helen Belkin Art Gallery’s collection contains an impressive amount of approximately 4,500 works. Less impressive is that about only 565 pieces — or 13 per cent — are by female artists. And of the 141 women who have contributed to the gallery, just 60 have Wikipedia pages.

That is, until Saturday, March 18. That day, volunteers exceeded their goal in attempting to create 24 new Wikipedia pages and edit countless more under the auspices of the Art + Feminism Wikipedia Edit-a-thon movement.

Founded by Siân Evans, Jacqueline Mabey, Laurel Ptak and Michael Mandiberg, Art + Feminism’s Edit-a-thons have brought underrepresented artists to light since March 2014. Every March since, volunteers have gathered to create, edit and disseminate pages of female artists of all backgrounds and disciplines.

March 18 was the first time that I participated in the event and I decided to briefly sum up my experience.

12:18 p.m.: After a helpful Wikipedia orientation at Kootenay House in Place Vanier, we headed off to the Belkin to begin. I wanted an Art + Feminism t-shirt, but was satisfied by snazzy buttons and feminist symbol-decorated cookies. Plenty of primary sources, such as books and newspaper articles, were available to aid with writing the articles and the people in charge were quick to answer questions about procedure.

12:45 p.m.: CBC News — or ICI since it’s the French side; for some reason they don’t mind my shameful monolingualism — interviewed me. On camera, I forgot how to pronounce “underrepresented,” a term that’s kind of important considering what the Edit-a-thon is about. Evidently I should have stuck to the written word, so I recommenced typing.

2:40 p.m.: After having struggled to add an artist to the Canadian artists category for an embarrassingly long time, I conceded defeat and worked on Primrose Adams’ page for the rest of the Edit-a-thon. Adams, I learned, is a well-respected Haida artist who specializes in basket and hat-weaving.

I went to the Edit-a-thon without quite understanding its significance at first. But after talking with Dr. Christine D’Onofrio, the UBC visual arts professor who first organized the Vancouver-area events, I got a clearer sense of the importance of Art + Feminism’s mission.

“A lot of history, a lot of archives, have a male-biased, patriarchal voice,” said D’Onofrio. “So a whole other way of knowing and being in the world is silenced, and this is continuing in the digital age.”

She’s right. According to the Art + Feminism website, “less than 10 per cent of contributors to Wikipedia identify as female.” Wikipedia itself validates the claim, putting the percentage at nine as of 2011.

Just as online, the male-female balance in the physical arts sphere is skewed, as seen in the case of the Belkin Art Gallery. According to Naomi Sawada — manager of public programs at UBC — the unequal numbers shocked her, but weren't totally unexpected.

“We’re doing more research and it turns out that collections around the world, and museums and galleries, have about the same percentage,” said Sawada.

Sawada, who helped set up the Edit-a-thon at Belkin after hearing D’Onofrio give a speech on the topic, hopes to hold the event there until “until every female artist in our collection has a Wikipedia page.” She admitted it’s “an ambitious goal” — with 20 pages a year, not accounting for growth in the collection, it will take about 28 years to achieve.

D’Onofrio agrees. “It helps if you have passion to give voice to things that have not necessarily been articulated in any specific way in the public sphere,” she said. “It’s an exciting endeavour.”

Both women stressed the importance of participation, especially for first-timers like myself.

“Anybody can join,” said Sawada. “Especially now that the user interface has changed. Now it kind of works like a Google document.”

The ease of access gave rise to a great diversity of backgrounds among the 30-odd volunteers — from first-year arts students such as myself, to actual artists, graduate students and professors — who were either seasoned or new Wikipedia editors.