Radical Imagination: CCEL event focuses on the power of storytelling and imagination 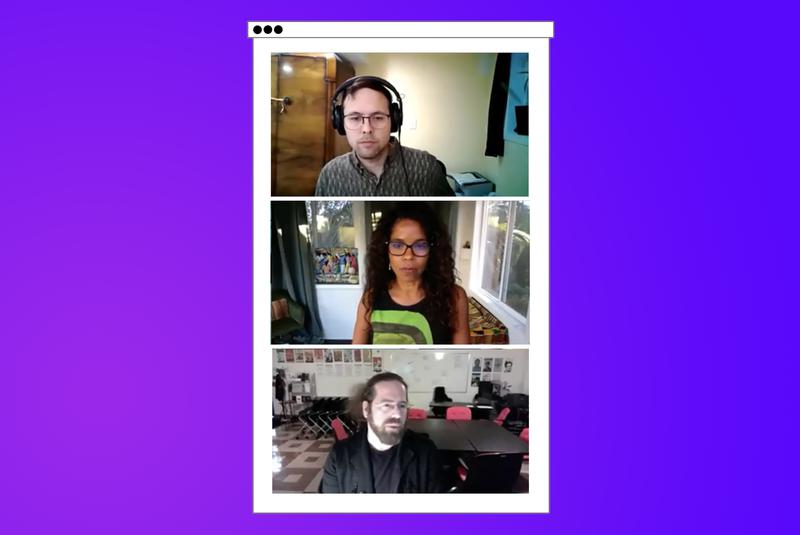 What we imagine does not just have to be a fantasy, it can also be a reality. Jasmine Foong

The UBC Center for Community Engaged Learning (CCEL) held its third event in the Doing Stories Justice Speaker series on Thursday, March 25. The event, titled Radical Imagination: Storytelling and ways of Connection, showed how imagination is grounded in our collective history.

The thought-provoking event was (virtually) graced by well-known speakers Max Haiven and Gaye Theresa Johnson whose conversations with moderator Michael Denhamer made for an intellectually stimulating 90 minutes.

Imagination for both ‘good and ill’

Canada Research Chair of Culture, Media and Social Justice at Lakehead University and the author of books such as Revenge Capitalism and Radical Imagination, Haiven, spoke first. He described imagination as a collective process that enables the human race to draw on all the ideas that surround us and helps build new imagined futures and narratives.

Haiven talked about how the imagination can be used for both good and ill, with it being responsible for both, giving some individuals hope for a better future and subjecting others to oppression by being primarily responsible for constructing the category of race. He emphasized the role of the imagination in social movements with it being the guiding force behind allowing activists to think out and work towards building a brighter future.

I had always thought of imagination as a wonderful concept that allows a temporary escape from reality and enables us to create a superficial, fairy-tale world that we know full well is never going to be realized.

Associate Professor of African Studies at UCLA, editor of Futures of Black Radicalism and author of the book Spaces of Conflict, Sounds of Solidarity, Johnson, spoke next. She started by asking what truly makes us feel free. This exercise was a welcome change after half an hour of intense conversation. Gaye shed light on the issue of racism and spoke about the ‘Black radical tradition’. She defined the ‘Black radical tradition’ as “radical imagination of an unshakable belief in the possibility of  abolition of all forms of (Black) oppression.”

The imagination is what lifts the spirits of the oppressed and allows them to express themselves in artworks and in politics. It enables them to discover themselves through culture and through community.

I learnt the importance of community in the creation and fostering of new ideas and movements. As Gaye said, our most radical ideas happen in community. It gives us hope and a sense of belonging which are both instrumental in encouraging us to explore the true potential of our imagination.

Gaye talked about how the oppressed should always trust themselves and their community as their collective ideas about freedom are what gave a lot of others the inspiration to make their society a more liberated one.

The power that imagination wields both as a concept and as a collective force of the people’s aspirations, ideas and commitment became increasingly clear to me through this conversation. What we imagine does not just have to be a fantasy, it can also be a reality.

The event inspired me but also made me realize how little I really know about our world and the struggles of its people. It made me trust in the power of community and togetherness and realize that the mere possibility of a brighter imagined future should and will stir people to action.