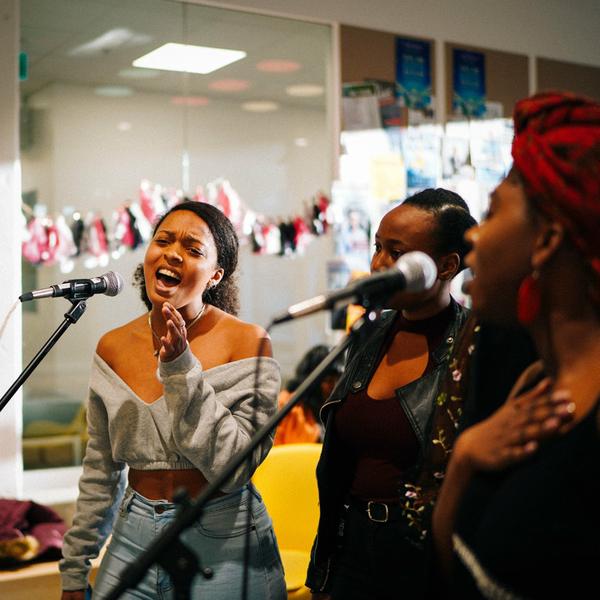 The various events showcased a diversity of artists, speakers, identities, disciplines and feminisms, and were held at different locations across campus over the course of three days. Courtesy UTown UBC

Amidst global celebrations, UBC gave a toast to women through its very first on-campus programming for International Women’s Day.

“Turn It Up and Disrupt” was held from March 9 to 11 and was organized by nine campus sponsors including the UBC Arts and Culture District and the faculty of arts.

“We all move forward to bring together people under the theme of how art can advance feminism [and] gender equality,” explained Deb Pickman from the UBC Arts and Culture District. “Art is so powerful to unpack difficult conversations, make them enjoyable and open people's hearts and minds.”

The various events showcased a diversity of artists, speakers, identities, disciplines and feminisms, and were held at different locations across campus over the course of three days.

Dissolve, a theatre performance with one actor playing sixteen roles, told the vividly nightmarish story of a college girl whose drink was spiked at a party. Student organizer Pekhna Mahajan called it “very powerful.”

“... I feel it was really well set out in the different characters and how the story [built] up,” she said.

Adrienne Ahn, another student organizer who attended the performance, said, “It was intense but in a good way, because it's a very important message to be sent out to a lot of people.”

A feminism-based Wikipedia edit-a-thon was another unique segment of the celebration. The “Art + Feminism Movement” has been held at UBC for the past three years and provides an accessible environment for people to actually participate in and contribute to changing the way women are written about online.

Naomi Sawada, manager of the Belkin’s Public Program explains that “only 10% of Wikipedia pages are about [women], or written by [women], or about subjects that women or females would be interested in.”

“Bias actually affects how many female artists have that platform to share their own information and share their own identities,” said Stephanie Bueno, a fourth-year international relations student. “... I think this [event] is important because this is a really small step that we can take into closing the gender gap and getting a little bit closer to gender equality.”

Other events on the schedule included film screenings, guided discussions and workshops led by SASC and SVPRO going over topics such as healthy masculinity, bystander intervention and decolonial activism.

However, despite its surprisingly radical programming, the events were sparsely attended. Whether it was due to a lack of effective advertising or marketing, there was a lack of awareness surrounding the line-up.

“It is inspiring that an event like International Women's Day here at UBC is something that allows for many people to come together,” said Sawada. “... [No one] should feel excluded from this kind of event, because it really takes all of us to support each other, in order to achieve a better life, a better means of interacting with each other and to form relationships.”

The closing program of the day was a burlesque show by Viagro Nation, an all-Indigenous women’s collective of burlesque performers. Their mission is to reclaim Indigenous sexuality and inspire people to love [their] amazing bodies.

The performances ranged from funny to sweet to emotionally devastating. Amanda Stroyer’s performance about the “No Dakota Access Pipeline” movement brought some audience members to tears.

The burlesque performance was, in a lot of ways, the best way to wrap up "Turn It Up & Disrupt." Even though it wasn't heavily attended, the audience was enthusiastic and excited to be there and the messages summed up the entirety of the event’s programming.

Just like MC Sparkle Plenty declared: “No more of this bullshit patriarchy nonsense.”