The night that goths come out to dance 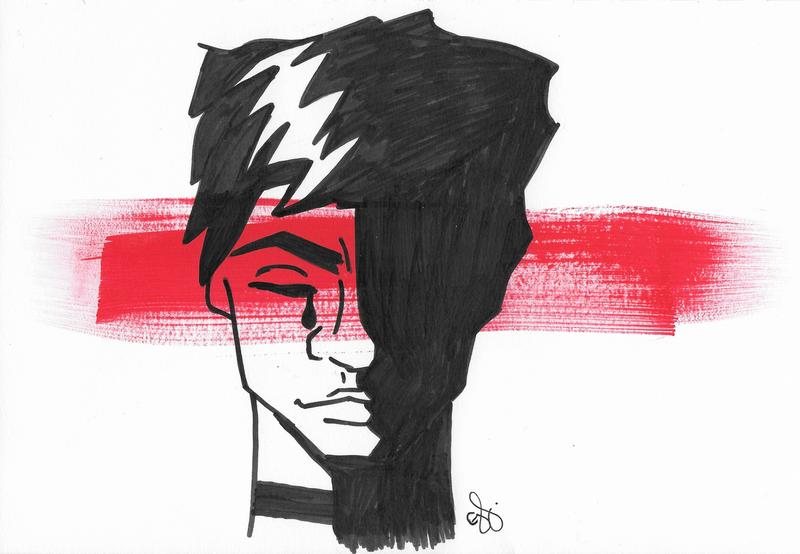 This is Descent, the Red Room’s Goth party that has been tradition for almost a decade. Greta Jang

Is there anything more adorably edgy than dancing to death metal on the sabbath?

I was turning the question over in my head as I surveyed the room. On the dance floor, a single woman in a flowing black dress swayed, her arms flickering before her like a witch casting a spell. Nearby sat eight of her friends at a long table, all chatting amiably while clad in the uniform: bulky combat boots, black lipstick, gratuitous eyeliner, leather jackets, long flowing overcoats, pinstripes, pseudo-medieval dresses, gaudy silver chains, chokers, metal studs — the list goes on. Every so often, she would revisit her friends for a sip of her wine and some friendly conversation, then head right back to her lonely incantations.

This is Descent, the Red Room’s Goth party that has been tradition for almost a decade. For a modest $5 cover, you are promised the opportunity to “push away the dark memories of 2017 and dance out your tension” to the best that punk, electronica and metal music had to offer.

The event has no dress code, emphasizing that all are welcome. As the event’s Facebook page advertises, “Jeans and a t-shirt? No problem. Full out Goth? Totally AWESOME! Punk kid? Rock god? Sk8tr girl? Great! Sweet! Wicked!”

As I bought my bewildered friends a drink — my request to go to a goth party on a Sunday was out of the blue, to say the least — the bartender assured me the club was just starting to fill. I was in for a wild night.

Sure enough, the goths began to trickle in, joining the lonely enchantress on the dance floor and filling the barstools. There was a tiny girl with vivid pink hair and glittering black face paint that flowed from her eyes like a mask. A stout, tough, older woman with short hair played pool with a flamboyant young man sporting a cowboy hat, scarf and tucked-in tank top — all black, of course. A pair of bald, leather-clad bikers played the next game. A tall, muscular man with a blonde ponytail and black earrings shared drinks with a young woman. In the dim neon lighting, he looked like a moody Chris Hemsworth. His shirt said, “Wolves don’t lose sleep over the opinions of sheep.” Behind them sat a dark, handsome man of about thirty with a skull on his t-shirt, brooding. At first he looked uncomfortable, never dancing or talking to anyone, but he stayed for hours and slowly began to loosen up, strolling about and nodding to the music. He looked, like after years of searching, he had just found the place where he truly belonged.

A couple in their mid-fifties cuddled in a booth. The man wore a sheer, black top under an unbuttoned collared shirt with shiny metallic studs. His dark gray hair was rakishly tousled, pairing nicely with his painted raccoon-eyes and studded choker. His partner wore a sequin black top and red lipstick. I imagined they had been married for decades and spent all week looking forward to these date nights, where they could channel their youth and wax romantic.

A new DJ subbed in, and the music escalated from bewitching electronica to screaming death metal. I forced my friend to come dance.

With the crashing guitar chords and eviscerating vocals, the style of dance took on a new flavour. Gone were the magical gestures and graceful twists. Now the crowd stomped and thrashed ferociously, comfortably in solitude, possessed and enraptured by the surging music, oblivious to their surroundings. One woman squatted with her hands on her knees and whipped her hair back and forth like a wild Willow Smith. A man in a fedora and overcoat writhed on a raised platform — he had a pointy beard and moustache that made him resemble the Guy Fawkes mask. The middle-aged couple slow-danced amidst the chaos.

The man who stuck out in my memory the most, however, wore black teardrop eyeliner, a studded choker and a t-shirt emblazoned with the name of an obscure Scandinavian metal band. He repeated the same move endlessly, a cathartic gesture where he reached to the ceiling, grabbed at the air and then rushed his hands downward to clutch at his stomach, bent over like he’d been shot in the gut. As the throbbing guitar and screaming swelled, his movements became increasingly convulsive. He shook as he reached for the sky, trembling as he keeled over into his ball. It dawned on me that he was no longer in control of his body, that the shear, ecstatic anger of the music had become him.

When the song ended, he and everyone else snapped out of their trances and cheered.

The whole experience left me with a silly smile. We live in such cynical times —as if we’re conditioned to scoff at emotion when we see it. But here was a small community sharing an experience so pure and ecstatic that the members didn’t care about how they were supposed to feel or look. It’s ironic that a subculture which so many people associate with intense sadness and nihilism is built around such a self-evidently meaningful experience. But the goths are right: life is sad. It’s tragically short, full of unfulfilled dreams and suffering. It seems to me we need to cling to ecstatic experiences like what I saw at Descent and find the right people to share them with.

Whether you want to dress up like Edward Scissorhands, brood in a corner, dance like a witch around her fire or simply soak it all in like me, you’ll be sure to feel like you were a part of something special there.