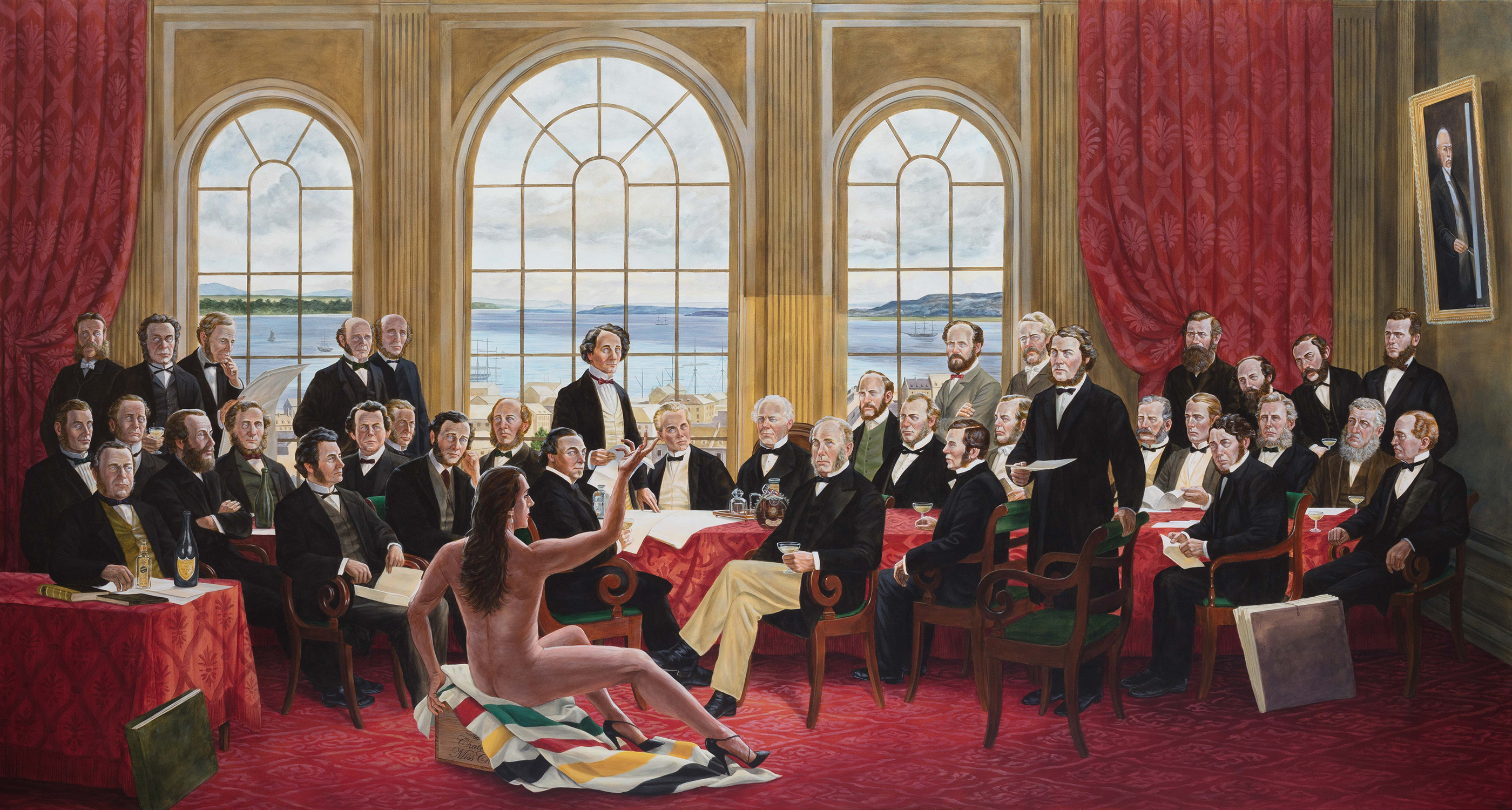 For those who feel that “at least Canada is better” than our southern counterparts, we have to reexamine our nation’s history of stealing rights, land, and culture from Indigenous people. Courtesy Museum of Anthropology, The Daddies, Kent Monkman

In the wake of an ongoing movement against police brutality, we in Canada have had to reevaluate the damage done in our community against all people of colour.

When I was growing up, I used to be proud of the fact that I was a fourteenth generation Canadian. When I learned about the incoming settlers, my ancestors were pioneers braving the harsh winters and life in a New World. Some were the filles du roi, young women risking it all to come to Canada for a better life.

However, in the past few months, I’ve had to reexamine my own history and my ancestors’ involvement or complacency in the horrors committed against Indigenous people over the past 150 years. That’s why it meant so much to me to attend Kent Monkman’s Shame and Prejudice: A Story of Resilience and remind myself how much I have to unlearn from my history classes and relearn through the Indigenous perspective.

In the wake of an ongoing movement against police brutality, we in Canada have had to reevaluate the damage done in our community against all people of colour. For those who feel that “at least Canada is better” than our southern counterparts, we have to reexamine our nation’s history of stealing rights, land and culture from Indigenous people.

In elementary and high schools across Canada, we’re taught the basics of Canadian history — through the settlers’ perspective. It’s reflected in the historical novels of the period, the art, and most of the other kinds of culture that erases the Indigenous perspective.

Kent Monkman, an internationally renowned Cree artist, noted this erasure, particularly in art. Monkman set out to share the Indigenous perspective of Canada’s colonization, which has taken shape as Shame and Prejudice: A Story of Resilience, hosted at UBC’s Museum of Anthropology from now until January 3, 2021. With nearly 80 pieces including paintings, artifacts, sketches and installations, the exhibit is a truly sensory experience of Indigenous history.

Monkman’s exhibit is divided into nine chapters, narrated by Miss Chief Eagle Testickle, “a gender-bending time traveler” as described by Monkman. Miss Chief begins with New France and the beaver trade of Hudson’s Bay Company.  A prominent work of this first chapter is A Massacre of Innocents (2015), picturing settlers slaying beavers in manners most macabre, while Miss Chief cradles a few beavers, hidden behind a tree. She takes form in several of his works, most famously as the centerpiece of The Daddies (2016). 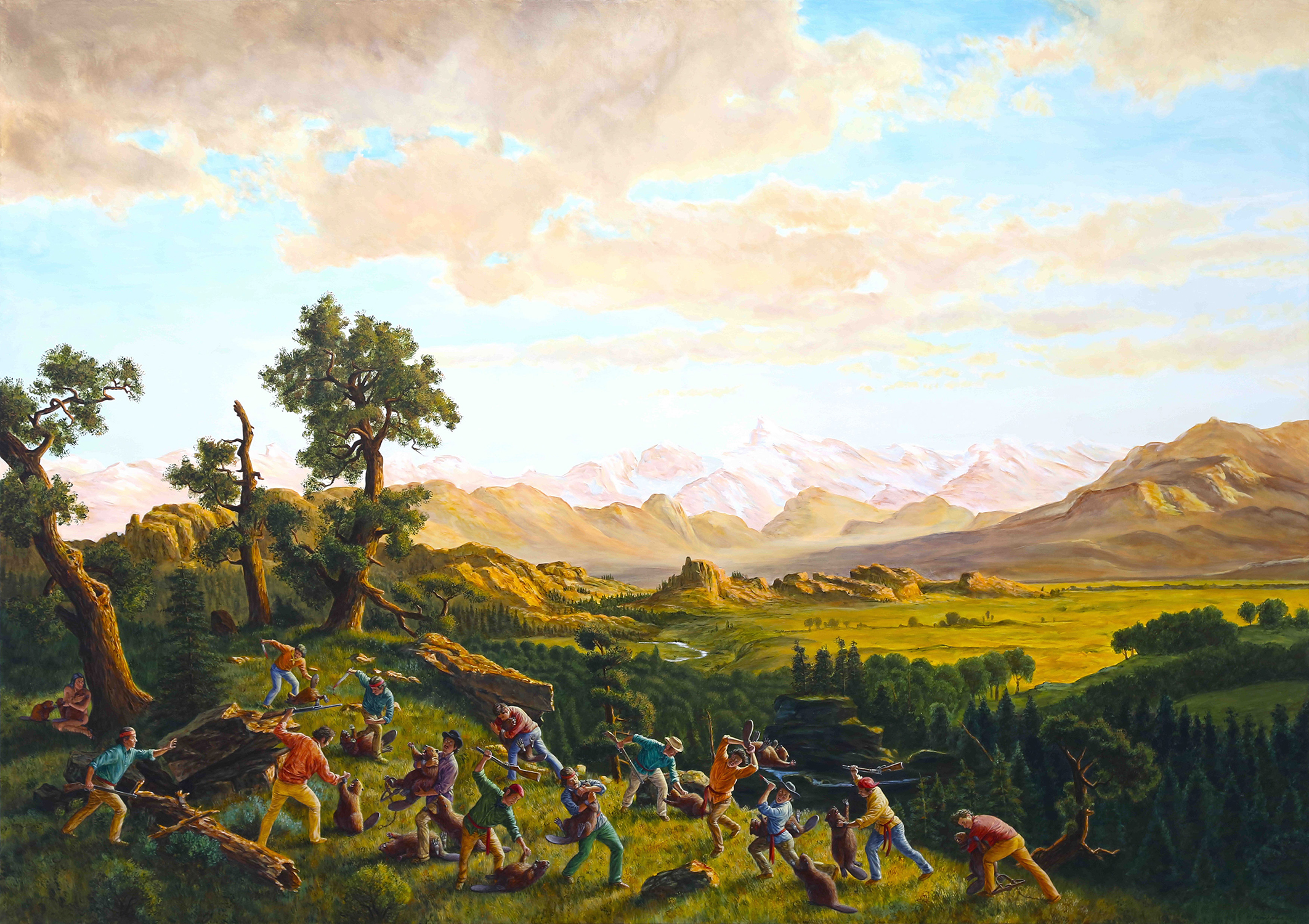 A Massacre of Innocents pictures settlers slaying beavers in manners most macabre. Courtesy Museum of Anthropology, The Massacre of the Innocents, Kent Monkman

The exhibit does an incredible job of covering the range of injustice that Indigenous people in Canada have faced over the past 150+ years. From the starvation methods of the government to the forcible transfer of children: intergenerational trauma, grief, and anger practically jump off the walls. In Canada, we are more familiar with the horrors of the past than the present, which is why Chapter IV: Incarceration, is so hard to stomach. Despite making up less than five per cent of the population, a third of incarcerated individuals are Indigenous.

In this chapter, Minimalism (2017) features Miss Chief in a cell, holding up a feather to the light and braided sweetgrass at her side. Attached to the outer wall of the cell is a series of letters from Lisa Peltier to Rilla, Kent Monkman’s mother. Peltier shares her experience in prison, describing a variety of illnesses. She is the daughter of Leonard Peltier, a Native American activist given two life sentences after allegedly murdering two FBI agents. Many have denounced the conviction and demanded his release. He has yet to be pardoned. 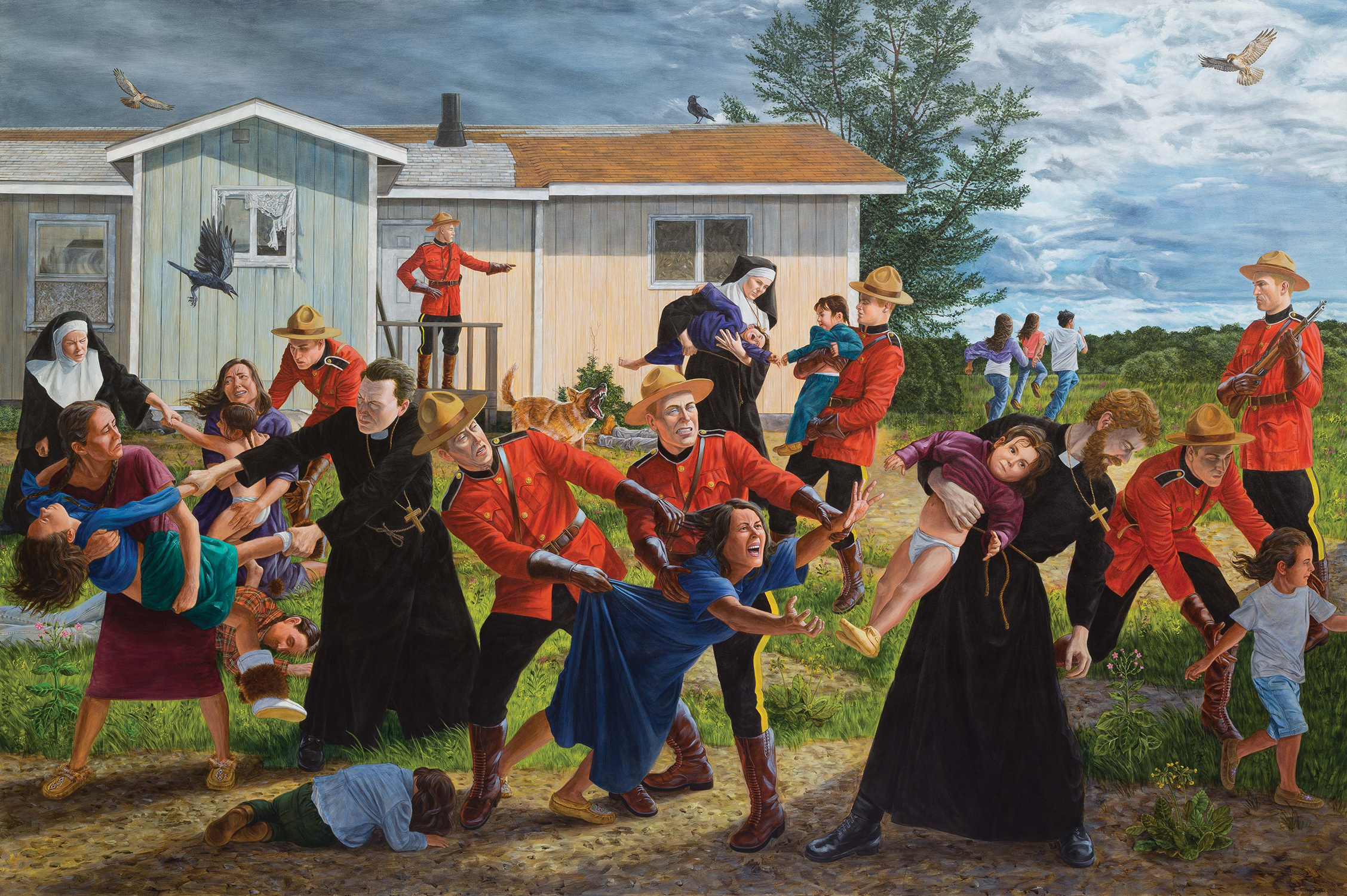 It is a violent (and accurate) portrayal of Indigenous children being taken by Christian missionaries to residential schools. Courtesy Museum of Anthropology, The Scream, Kent Monkman

Throughout the exhibit, Monkman integrates Indigenous spirituality, often juxtaposed with looming or forced Christianity. One of the most emotionally infused paintings is The Scream (2017), which as Monkman describes, “transcends what a photo can do.” It is a violent (and accurate) portrayal of Indigenous children being taken by Christian missionaries to residential schools. Monkman purposefully left Miss Chief out of this piece, stating, “If she could, wouldn’t she stop it?”

The exhibit is rich with symbolism, not just with elements of Christianity but to re-contextualize iconic parts of Canada’s history. In The Daddies (2016), Miss Chief sits naked on a Hudson’s Bay blanket, facing the Fathers of Confederation.

Later, in Nativity Scene, Jesus lays on the same blanket. Monkman shared the various symbolisms of the blanket in these pieces; first, it represents Hudson’s Bay Company, the “government before government.” It also links to the smallpox epidemic of the early 1800s, due to infected blankets given to Indigenous people. Lastly, it represents the exploitation of Indigenous people, as they were in helping traders of Hudson’s Bay in the early days of colonization. 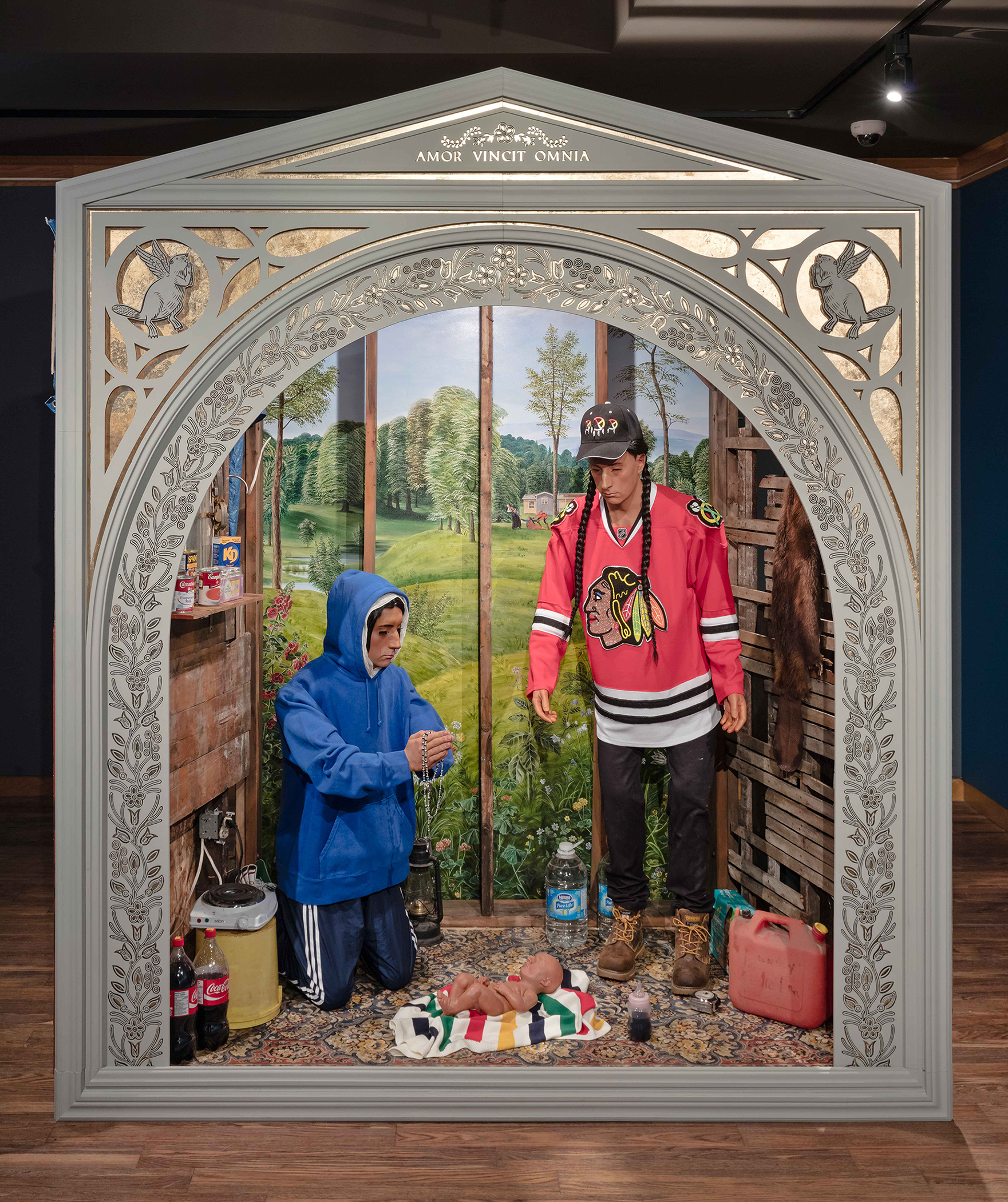 It represents Hudson’s Bay Company, the “government before government”. It also links to the smallpox epidemic of the early 1800s. Courtesy Museum of Anthropology, Nativity Scene, Kent Monkman

In the final chapter, Urban Rez, Miss Chief transports visitors to Winnipeg’s North End. Several of Monkman’s paintings depict violence between Indigenous and white people, as angels fly above with birds. To some, the angels represent a saviour or a symbol of transcendence. In this context, Monkman creates an alternative — predators, looming over the people below like vultures. This chapter is further complexified by depictions of humans and animals on the street, painted in a completely different style, much like traditional Cree art.

Shame and Prejudice: A Story of Resilience is “authorizing and canonizing the Indigenous perspective” of Canadian history. For all of us that grew up in Canada, it proves that we have so much more to unlearn and relearn about our history. We have to question what we were taught, and how we learned it.

Whether you consider yourself an expert on Indigenous studies or have yet to scratch the surface, take a walk through the exhibit.

It will challenge and move you, and what’s more 2020 than that?