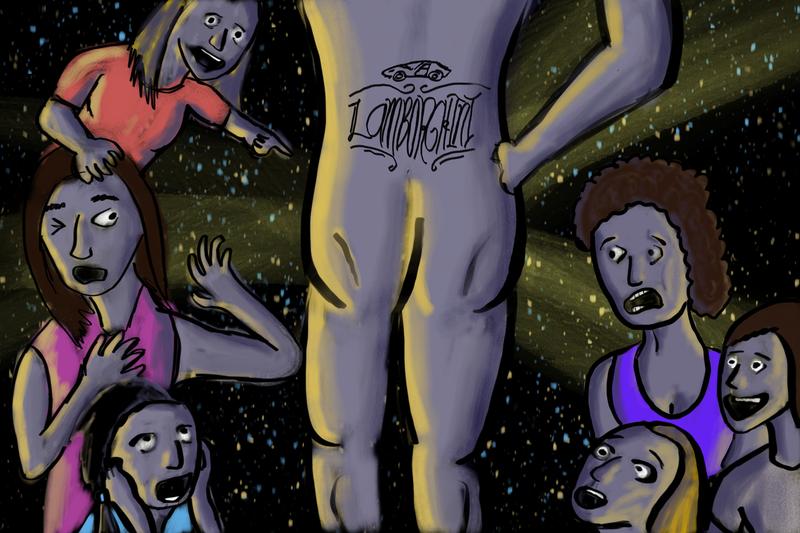 His moves involved pec dancing, a few floor dry humps and a whole ten-second? view of his genitalia. Illustration by Samuel Du Bois

Watching an incredibly fit girl in heels spin around a pole using nothing but her legs, while simultaneously getting naked.

Of course, on the night of September 30, this was not the main attraction at the Granville Strip. Daniel Maguire, a contestant from The Bachelorette and Bachelor in Paradise, hosted ladies night. He is infamously known as “The Canadian,” and is remembered for his well-defined abs and weird antics, such as pouring maple syrup all over his body. Originally from Penticton, Maguire divides up his time between home, Vancouver and modelling gigs in Europe.

As a strip-club virgin, I walked in around 7 p.m., totally unsure of what to expect. If you've never been to the Granville Strip - it is a nice vicinity with tall brick walls, soft lighting and, of course, a giant silver pole in the centre of the stage.

Maguire was introduced around 9 p.m., where he stood awkwardly on stage, sipping white wine and answering questions regarding his experiences on the shows. Maguire presented the audience with some profound knowledge - he was never attracted to Jo-jo, Vinnie was his favourite guy and he liked Sarah’s personality the best. Insight worth the $30 door ticket? That’s up to you.

While Maguire was the big header for the evening, his participation in the night’s events was fairly tame. He helped the MC pick out the free shot winners of sex trivia (70% of women SAY they have an orgasm every time – who knew?) and sat in a chair holding his penis.

Ah, yes. A classic ladies night game, the dick ring toss. Maguire sat in a chair, holding an impressive fake penis, while lucky women from the audience threw rings at it. At this point the crowd began to get a bit hectic with the phallic excitement and booze kicking in. Some lucky birthday girls and a bride-to-be even got special attention from Maguire, getting some free ring throws in. Congratulations on your big day, Michelle! Maguire even lifted his shirt, giving us a sweet five second shot of his abs. Don’t get too crazy there, bud.

In general, the male dancers for the evening were mediocre at best. The first stripper came out in an army outfit and spent the majority of his performance checking himself out in the window. His moves involved pec dancing, a few floor dry humps and a whole ten second view of his genitalia. Did you think that strippers were supposed to demonstrate talent using the pole? Yeah, me too. The second dancer for the evening – yes, TWO male dancers, try not to get too spoiled ladies – was remarkably better, actually demonstrating some skill on the almighty stripper pole. With some acrobatic talent but questionable costume choice (do you find sweepers sexy?) he was significantly better than the first stripper. Unfortunately Mr. Sweeper could not hold a light to any - literally any - of the girls.

Ladies night – which lasts approximately 2.5 hours – ended abruptly when the Chippendale waiters were replaced with women in lingerie and a half-naked girl suddenly came up onstage. Now let me tell you – she was so phenomenal that I stayed and watched three more women perform after her. They are insane acrobats with a level of flexibility and strength that is way too underrated. These women put on amazing performances. That’s right – actual performances. I don't know what you would call the subtle movements and strutting that the first male dancer did, but it is definitely not worthy of being called a performance.

These ladies amazed me – no, astounded me. I was totally flabbergasted by their unbelievable fitness – I can only dream of calf muscles like that. Also, all three of the women I saw got naked – as in, full on titties and vagina naked. Out of the two male strippers I saw over a 3 hour time period, only one got naked. It lasted maybe a minute and if he was trying to dance, I really didn’t get it. These women were completely naked for nearly their entire show while simultaneously doing insane physical feats on a pole. I assumed that would cause some sort of chafing or rug-burn situation, but what does the strip-club virgin know?

So, what is my big takeaway from Daniel Maguire hosts Ladies Night? Magic Mike is a scam, ladies and gentlemen. Female strippers are way more talented, way hotter and deserve way more credit.