Review: Flamingos, mushrooms and cheap beer made Goosehunt 2018 go round 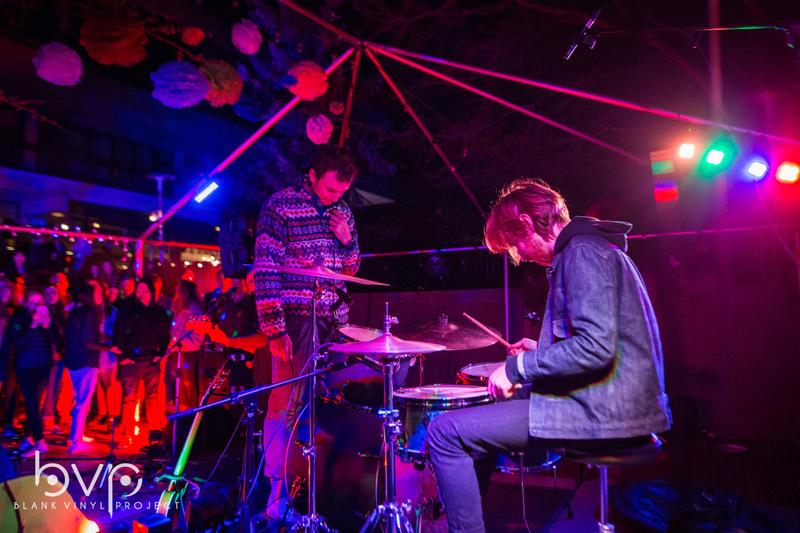 Rap duo The Afrolution summarized the vibe of Goosehunt, the Blank Vinyl Project’s 2018 live UBC music festival. Featuring a lineup of 12 acts — from rap groups, to indie rock bands to DJs — Goosehunt was the lo-fi show that UBC desperately needed but didn’t know it wanted.

Hosted on March 31, the one-day festival featured seven hours of UBC talent in a cleared-out Koerner’s Put reminiscent of your wealthy-friend-from-high-school’s back porch, with tables pushed against walls and stacked high with empties. A barbeque set pumped out burgers for an increasingly tipsy crowd.

Last year’s theme was Woodstock. This year, they went with Coachella to max out those “psychedelic festival vibes”, which as far as we could tell meant there were a couple painted mushrooms on the stage (subtle, guys) and a giant inflatable flamingo by the photo booth. Why not a goose? Why is it even called “Goosehunt?”

Questions aside, the ten bands and two DJ sets performing represented every trajectory and style of music you could hope for. The Afrolution packed the outdoor stage area with a mix of loyal fans and new converts, encouraging the most awkward among us to wave our middle fingers in the air. Goosehunt veteran, Emily in the Headlights, looks and sounds like the band your barista plays in — if you’re a bougie millennial who actually has a barista — so by the end of the night, all of us were happily singing to sappy indie rock tunes.

Other performers, like recent Last Band Standing winners and AMS Block Party performers Marine Drive and If Not, Winter, were anticipated acts that drove a mix of dancing, serene head-nodding and, in the case of the latter, extremely contemplative swaying. It was a warm-up for the night’s two DJ sets, who made the psychedelic dreamworld dissolve into a pit of frantic moshing in minutes.

Speaking of, the evening’s debauchery was fuelled by Parallel 49 (P49) cans, Jägerbombs and draft beer — served in suspiciously-sturdy red solo cups — at prices low enough to make waiting in the long line at the bar worth missing your friend from first year’s opening song outside. And when P49 ran out, the willingness of the crowd (and your reviewers) to switch straight to hard liquor was a testament to the enthusiasm BVP drummed up — enough that hundreds of people actually chose to spend their Saturday night on campus.

The best part of it all? People made friends. Some blonde girl invited us for a round of Jägerbombs two minutes after meeting us (we forgot your name because we’re bad people, but we really appreciated it). A guy came up to us and started performing an unprompted magic trick, which was much less strange in context. The people dancing on their own actually talked to us, which made us feel almost cool and less like writers who were there because, um, journalism.

Goosehunt isn’t a music festival in the way you would imagine, nor does it need to be. It was an incredible show with diverse acts, cheap booze and a great crowd there to support local music. Some of it was incredible, some of it was kinda wack, but all of it was part of the ride. We left Goosehunt thinking that UBC needs more nights like this.