Lion in the Streets is intensely personal, nearly too raw to review 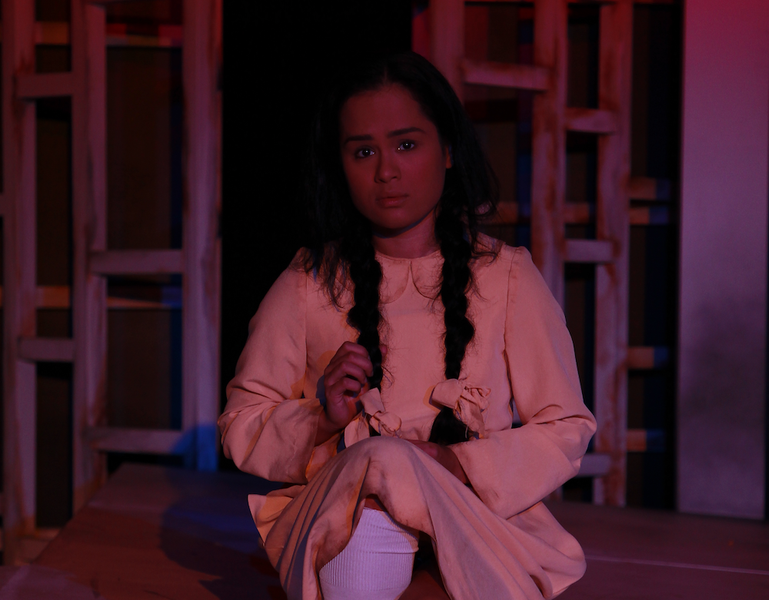 Lion is supposed to end with the message that you can forgive, that you can take back your life. I didn’t feel this. Elizabeth Wang

Lion in the Streets is raw — so raw that it’s hard to watch. Even after you do, you’re not sure if you’re glad you did.

The play opens with nine-year-old Isobel, unaware of the fact that she’s a ghost, chattering and running in circles above the audience. This first scene is the weakest part of the production. If you’re sitting on the ground floor she is hard to hear and hard to see, and when she finally descends to the main level things do not improve.

School children crudely mock her, but the dialogue seems so awkward and unnatural that it’s difficult to muster up much sympathy for Isobel’s character. After the first few minutes, I was left with the feeling that this play was going to be hard to sit through.

And then things changed. The tone of the play shifted, and I knew with certainty that it was going to be difficult to get through, though not for the reason I had initially thought.

Instead of feeling fake, the characters felt too real. The words they were saying still didn’t feel like things that people would actually say, but it was as if they were expressing the reality that constantly lurks beneath the surface of our lives. This was a sort of reality that was too painful and raw to unveil in everyday interactions.

This change occurred when Sue (Cassandra Bourchier) attempts to convince her cheating husband to return home with her. At first the scene seemed like it was going to be clumsy and over-the-top, but Bourchier plays Sue masterfully, creating vulnerability that bled into every corner of the theatre. She becomes desperate and fragile, and her sense of hopelessness transferred to the audience who has no hope of helping her.

The other standout in Lion was actor Lorenzo Tesler-Mabe. Portraying both a kindly priest overcome with guilt and Edward, an abusive financé, it was only after reading the program that I realized the two characters were played by the same person. As the priest, Tesler-Made is warm, hesitant yet reassuring. As Edward, he is terrifying. At one point the abuser accuses his fiancée of being a snake. In reality, he is the snake-like menace, slithering into the corners you think are safe.

The costume and sets played a huge role in immersing the audience within this fractured hyper-reality. Tesler-Mabe’s unrecognizability as his two characters is no doubt due to his phenomenal acting, but must also be attributed to the costume and make-up designers who transformed his entire appearance and demeanour.

The set is raked, which means that the actors are always on slants and weird angles, further adding to the sense that the events of the play are happening just below the surface of reality.

Lion in the Streets is a challenging play to watch, and also challenging to review. When I review something like a Shakespearean comedy, I’m certain that my experience is at least somewhat similar to everyone else in the audience.

But I can’t say the same for Lion in the Streets. It felt personal — intensely so. It left me feeling like I was witnessing moments that didn’t belong to me, while also stirring up thoughts and feelings that didn’t belong to anyone but me. I felt that I was simultaneously intruding and being intruded upon, and ended the night bawling in the arms of the person who’d come to see the play with me.

Lion is supposed to end with the message that you can forgive, that you can take back your life. I didn’t feel this. Instead I felt despair that this play had been written in 1992, yet everything it showed was still so relevant — that we have made no progress.