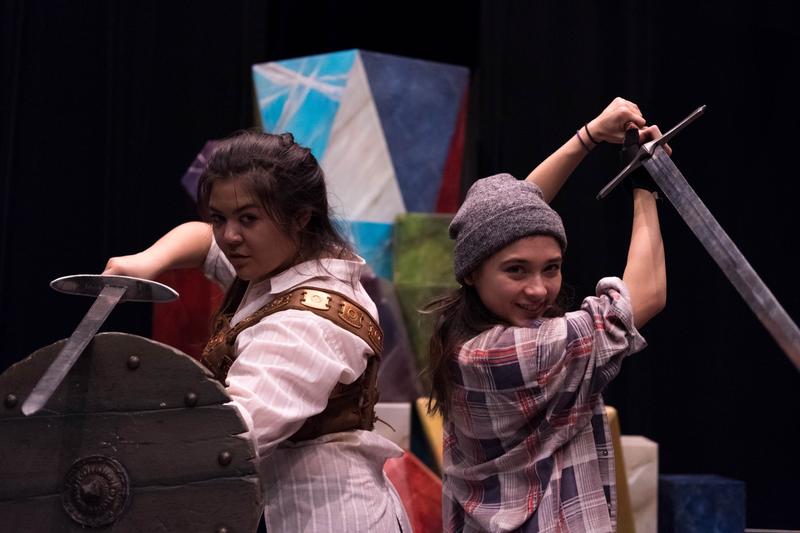 I did two things as soon as I got home from seeing She Kills Monsters: I unpacked my bag of colourful, multi-sided dice from storage and I bought another ticket to see the show again next week.

She Kills Monsters is a two-hour rush of stunning visual effects, impressive fight choreography and “my boyfriend thinks roleplaying is a sex thing” jokes. With a female-led cast and underlying themes of adolescence, family and acceptance, this is the sort of contemporary piece that UBC should be presenting more often, and one that UBC students are likely to enjoy.

She Kills Monsters does a lot of things right. While the clever ’90s references and nerdy comedy has to be credited to the playwright, Qui Nguyen, the cast and crew of the UBC production brought these aesthetics to the stage in exciting and innovative ways.

The Dungeons and Dragons (D&D) world is heavily showcased through lighting. Designer Stefan Zubovic deserves praise for bringing magic to life through effects and animations. Everything from a revival spell being performed to a magical staff casting the shadow of a five headed dragon helped the fantasy unfold and delighted the crowd.

It was often the little details that really made the play a pleasure to watch. When the protagonist Agnes levels up, the Mario power-up sound effect plays. When the monsters are waiting for a fight to continue, they bounce back and forth on their feet like classic video game NPCs. These nods to geekery charmed even the most uninformed viewers.

The extensive fight scenes had audience members leaning over balcony railings, trying to catch as much of the action as possible. It would be worth it to see She Kills Monsters for a second time solely to focus on different parts of the stage during some of the more action packed sequences. The fight choreography was far from basic swordplay. At one point, Agnes’s sister, Tilly (Heidi Damayo), wrapped her legs around a monster's neck and did a full 360 degree spin, toppling it to the ground like a professional MMA fighter. There was a full three minute battle sequence set to ’90s grunge rock and — even with the party tackling hoard after hoard of monsters — the cast did it all without losing the audience’s attention.

One of the things She Kills Monsters fell short on was the use of its creatures to the fullest extent. The puppets made a relatively brief entry into the show, meaning we didn't get to appreciate their full dramatic effect. The fight scene against the dragon — one hyped up by all the posters scattered around campus — felt underwhelming in comparison to the fast-paced intensity that was the rest of the show. That being said, the monsters were beautifully crafted and, for the time that they were on stage, added another level of professionalism to the performance.

Natalie Backerman elegantly captured Agnes’ journey from “ass-hatted” to “ass-kicker,” and Heidi Damayo played Tilly as a convincingly cocky nerd. Anni Ramsay and Daelyn Lester-Serafin stood out in the supporting cast as Evil Gabbi and Evil Tina — who were equally sinister in both the real world and the D&D world — as well as Jed Weiss, who played Chuck, the hilarious Dungeon Master and unintentional counsellor to Agnes.

She Kills Monsters starts its quest with Tilly telling Agnes that “this is a D&D adventure, not therapy.” But with a class like Paladin, Tilly is a healer of the wounded, which is exactly how Agnes enters the game. Through the means of sisterly-bonding, confidence building and empowerment, Tilly is able to help heal Agnes in her own special way. And she sure does kill a lot of monsters.