Review: Silent Night is a heart-wrenching tale of humanity 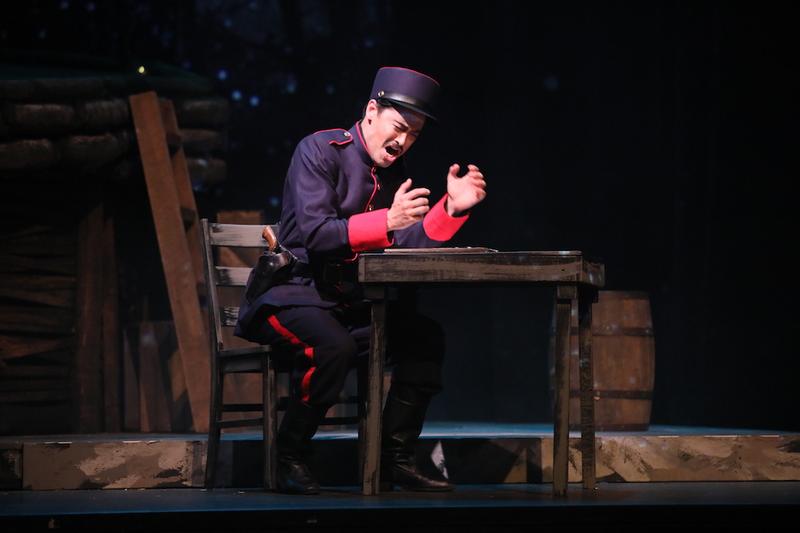 The actors did a splendid job of bringing the audience — at least myself — to tears with the emotion invoked by the music and passion of this story. Courtesy Tim Matheson/UBC Opera

Imagine this: the lights come down on stage and the UBC symphony orchestra begins tuning their instruments. As a lover of the performing arts, my excitement began to build as I sat in UBC’s Old Auditorium on November 3 for the opening performance of Silent Night.

UBC Opera’s Silent Night, which is based on the motion picture Joyeux Noël, tells the based-on-a-true-story of the “Christmas Truce” during World War I. It features two acts, which are sung in English, French, German, Italian and Latin with English subtitles.

This story is heart-wrenching. The actors did a splendid job of bringing the audience — at least myself — to tears with the emotion invoked by the music and passion of this story. All of the voices were projected through the auditorium and each note was pure. For a show put on in five different languages, following the subtitles while watching and listening was not difficult from the upper balcony.

One of my favourite parts of the show was right before intermission where Magdalena How, who played Anna Sørensen, sang a Christmas carol. Everything in the auditorium was silent, including the orchestra, aside from the light tapping of rain on the windows. As the music swells, How hits the purest high note I have ever heard. It was both breathtaking and inspiring.

Apart from the rest of the cast’s amazingly well-trained voices, the visual effects were quite something. The lighting on stage mixed with a video of falling snowflakes made the black floors appear as though they were covered in a light layer of snow. And we can’t forget even the smallest details, such as staging. I was able to clearly visualize who was singing even when the stage was covered with actors.

Overall, this tear-jerking show pulls at the heartstrings of humanity by portraying the message that every person is human. Even though they are telling a story of war where death is expected, the actors remind us as an audience that each character is a father, son and husband. I would honestly watch this show every night it is running if I could.

Silent Night will be performed on November 3, 8 and 9 at 7:30 p.m. and November 4 at 2 p.m. in the Old Auditorium. There will also be a symposium featuring veteran guest speakers happening between the dates of the shows on November 5, 6, 7 and 8. Visit the UBC Opera website for symposium and ticket details.