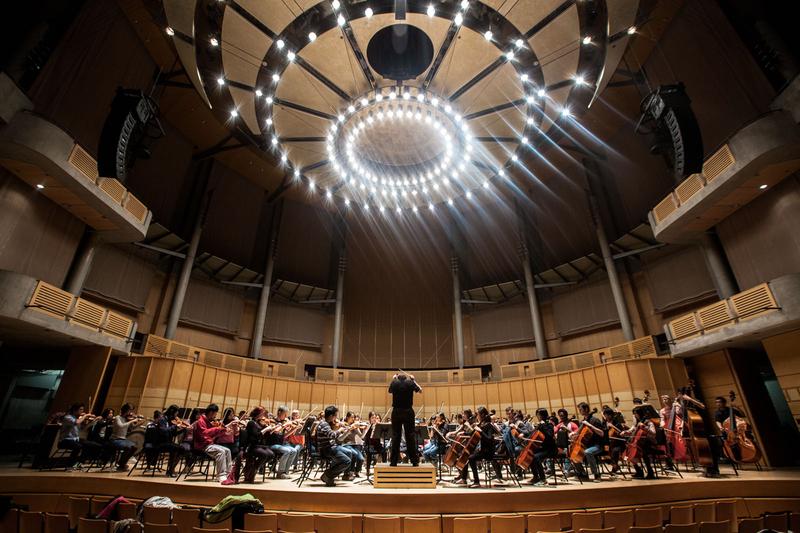 In spite of the fact that auditions were just a month ago, the UBC Symphony Orchestra started their season on October 6 at the Chan Centre. The concert was a full two hours of talented students led by conductor Jonathan Girard and guest-starring Eric Wilson on the violoncello — both of whom are professors at the UBC School of Music.

“I want to give exposure and rapture to education,” said Girard. “And to curate a really great experience for both the students and audience, with different styles, national origins and time periods.”

Their concert repertoire consisted of Antonín Dvořák’s “Carnival Overture, OP. 92,” which is part of the Nature, Life and Love trilogy. The overture began with vivacious tempos in keeping with the title of the work, then suddenly the atmosphere transitioned to a more relaxed setting, filled with the gentle voices of the English horn and flute, gradually building to the bustling ambiance of the carnival for a lively conclusion.

After Dvořák, Wilson took the stage with his violoncello for a rendition of Ernest Bloch’s epic, “Schelomo: Hebraic Rhapsody.” Composed between 1915 and 1916 as part of Bloch’s “Jewish cycle,” this series of works draw upon the biblical inspiration of Solomon, the preacher of Jerusalem. It was quite impressive to hear so many instruments illustrating the world surrounding Solomon, with the cello representing his thoughts on life and the unpredictability experience.

After the intermission, the audience was given a concise history behind Paul Hindemith’s famous “Symphony: Mathis der Maler (Matthias the Painter),” with Professor Alexander Fisher. The composition was originally an opera based on the life of Matthias Grünewald, an artist struggling with society during the Peasants’ Revolt of 1524. Even without the lyrics, the UBC Symphony Orchestra put on a theatrical rendition, utilizing string and wind instruments as a means to recount Grünewald’s experiences.

From start to finish, the orchestra did not lose their energy or expressive melodies. In addition, Wilson’s solo on the violoncello was impassioned and mesmerizing. Altogether, the ensemble played with great enthusiasm, creating a delightful ambiance throughout the performance.

Girard’s conducting must not be forgotten either, as it was thoroughly outstanding. Standing on a podium in front of the entire orchestra, his baton became an extension of his body — weaving and bobbing about with incredible enthusiasm.

Future concerts put on by the UBC Symphony Orchestra are free for UBC students. If you have a valid UBC ID card, you will receive one of the limited number of student rush tickets available at the Chan Centre ticket office an hour before the concert begins.

The UBC Symphony Orchestra’s next performance will be on November 4 at the Chan Centre, with guest conductors Johannes Müller-Stosch and Alex Toa. Tickets are available at the centre or online.