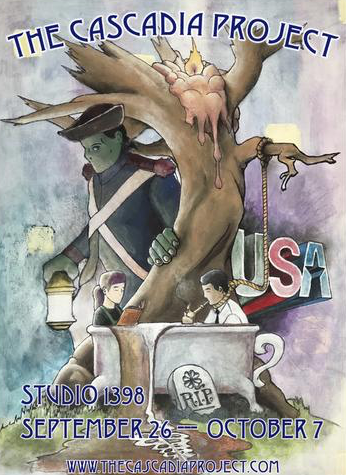 The Hanging Judge, a new play written and directed by Andrey Summers, begins exactly how you’d expect a show with that title to start: a deceased judge, played by David Quast, delivers a xenophobic speech while from a noose. The lights are dim and ominous, unmistakably turning the stage into a 19th-century graveyard in the dead of night. Terrifying, but hilarious at the same time, the play ran in the 2018 Cascadia Project Festival, created by UBC creative writing professor Bryan Wade.

The main source of humour comes from Chantecler and Blemish, two trolls who stumble upon the judge. Blemish, played by Vinnie Riel, complains about his hunger pains while the more refined Chantecler, played by Nathanael Vass, recounts his trip to France. Their conversation becomes more philosophical when Blemish reveals his latest catch: Bill, a Chinese businessman played by Mike Li, whom Blemish wishes to eat. Chantecler, in his wisdom, decrees that it would only be fair to eat the man if they give him a fair trial. Since there is a judge hanging in close proximity, they argue their respective sides to determine Bill’s fate. In the process, we learn a lot about the characters’ pasts and this strange world that Summers has created.

Each part was wonderfully acted. Blemish and Chantecler were endearingly Tolkien-esque, Bill’s earnest fear and confusion made you really feel for him in his ridiculous situation, and the judge was quite creepy. The British accents were superb, and added much to the show.

The more I think about The Hanging Judge, the more I like it. Summers used a fantastical setting to tell a story about real-world issues, such as imperialism, race and abuse. The show got very dark at times, which made the characters that much more real. One highlight of the night was when one of Chantecler’s elf ears chose a very appropriate time to fall off. Sure, it was probably unintentional, but who am I to judge?