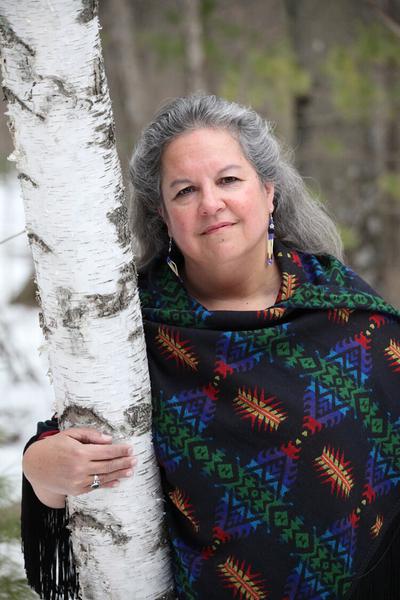 She is the acclaimed author of Braiding Sweetgrass, a book that weaves botanical science and traditional Indigenous knowledge effortlessly together. Courtesy Dale Kakkak

On January 28, the UBC Library hosted a virtual conversation with Dr. Robin Wall Kimmerer in partnership with the Faculty of Forestry and the Simon K. Y. Lee Global Lounge and Resource Centre.

Kimmerer is a celebrated writer, botanist, professor and an enrolled member of the Citizen Potawatomi Nation. She is the acclaimed author of Braiding Sweetgrass: Indigenous Wisdom, Scientific Knowledge and the Teachings of Plants, a book that weaves botanical science and traditional Indigenous knowledge effortlessly together.

She was joined in conversation by Dr. Ayesha S. Chaudhry, associate professor of Islamic Studies and Gender Studies, and Corrina Sparrow, a PhD student at the Institute of Gender, Race, Sexuality & Social Justice.

Kimmerer began in the traditional Potawatomi way — with gratitude, for the earth, the air, the land and everything around us.

She then introduced the audience to her companion and teacher, sweetgrass, a plant whose teachings are featured heavily in her book.

“I want you to meet the plant that you are reading about,” she said, displaying the braided strand for the audience.

Though the strands of sweetgrass can stand for many things, Kimmerer explained how, for her, each strand stood for a type of knowledge: Indigenous knowledge, scientific knowledge, and knowledge that plants themselves have.

“The earth showers us with gifts,” Dr. Kimmerer said, describing rainfall, clean air and the food that grows naturally. She contrasted this with the economy we live in that often asks how much more we can take.

“How are we called to live when we recognize that we are living in a world of gifts?” she asked, pointing to gratitude as the first response to such a realization.

She pointed out that the consequences of a failure of gratitude are spiritual as well as physical. If the spring is abused, the water dries up.

She encouraged the audience to think of life beyond the constraints of capitalism. In other words, living “not in a warehouse of commodities, but in a shower of gifts.”

“What if we turned our attention back to the things that actually sustain us?” she asked.

Lessons from the pandemic

Could the virus and its consequences teach us lessons that we have forgotten? Kimmerer believes so.

She explained that, in Anishinaabemowin, the word for medicine and the word for plants are often interchangeable.

“It reminds us that all healing comes through the strength of the earth,” she said. “That is what medicine is.”

Kimmerer pointed to human exceptionalism — the idea that humans are, somehow, not part of the same natural systems the rest of the world is.

“If the pandemic is teaching us anything, it’s how connected we are,” she said. She also explained that the pandemic was a teacher of humility — that we, too, are subject to the laws of the natural world.

She finished her opening statements by remarking on the incredible changes the pandemic has brought about.

“We are often sold this fiction that we are powerless,” she said. “But we can change quickly when life is at stake.”

She pointed to the power of community. “It gives me hope to know that collectively we can change.”

Chaudhry asked Kimmerer about the tension between reforming and dismantling — either working with harmful methods of knowledge production or abandoning those methods entirely.

She had a nuanced view of the issue. “There’s no question that Western science and worldview leaves a legacy of harm and damage,” she said, but she was quick to acknowledge that it also enriched and improved many lives.

Instead of scrapping the entire system, her answer is pluralism — also known as believing in more than one way of knowing and understanding the world.

Kimmerer described how Indigenous knowledge has often been dismissed in favour of the more acceptable Western scientific method.

“We give credence to one type of knowledge and dismiss another,” she said.

She then painted a vision of the future of knowledge. “It is my hope that we open our students and ourselves to the plurality of ways of knowing,” she said.

The discussion moved to a question posed by Sparrow about the responsibility universities have to honour the lands they are built on and honour and include the cultures to whom those lands belong.

Kimmerer prompted the audience to think beyond land acknowledgements, into action and imaging what real reciprocity could look like.

Aside from giving the lands back to the Indigenous peoples, which Kimmerer acknowledged as unlikely, she mentioned the idea of a shared research agenda between Indigenous communities and universities.

“Universities have so much infrastructure and availability for research tools,” she said. “In contrast, many Indigenous nations also have research questions but don’t have access to infrastructure. Why not have a shared research agenda driven by community needs?”

It also, as Kimmerer pointed out, provides the opportunity for intentional engagement between Indigenous knowledge and Western science.

One of the closing questions was about how non-Indigenous people can adopt ceremonial practices to deepen relationships with the land.

“We have a hunger for ceremonial practice, don’t we?” Kimmerer asked. “In Western society, we have lost so much of that.”

However, she was very clear about not encouraging the “adoption” of practices because of how often that can lead to cultural appropriation.

She explained that ceremonies don’t need to include Indigenous languages, songs or practices in order to feel grateful for the earth — humans are able to do that all on their own.

“To me, the power comes not from adopting, but from creating,” she said. She encouraged non-Indigenous members of the audience to create an authentic relationship with the earth on their own.

“That’s the most powerful kind of ceremony,” she said. “The kind that is authentic and originates with you.”

When asked for her ending thoughts on the conversation, Kimmerer said she would be leaving the virtual talk with a sense of courage, knowing that there were thousands of people watching and wanting to live in gratitude with the earth.

Her final words were an echo of the way she began. “I know we’re not alone, and that feels really good,” she said. “I’m filled with gratitude for the gifts of all these goods minds united.”