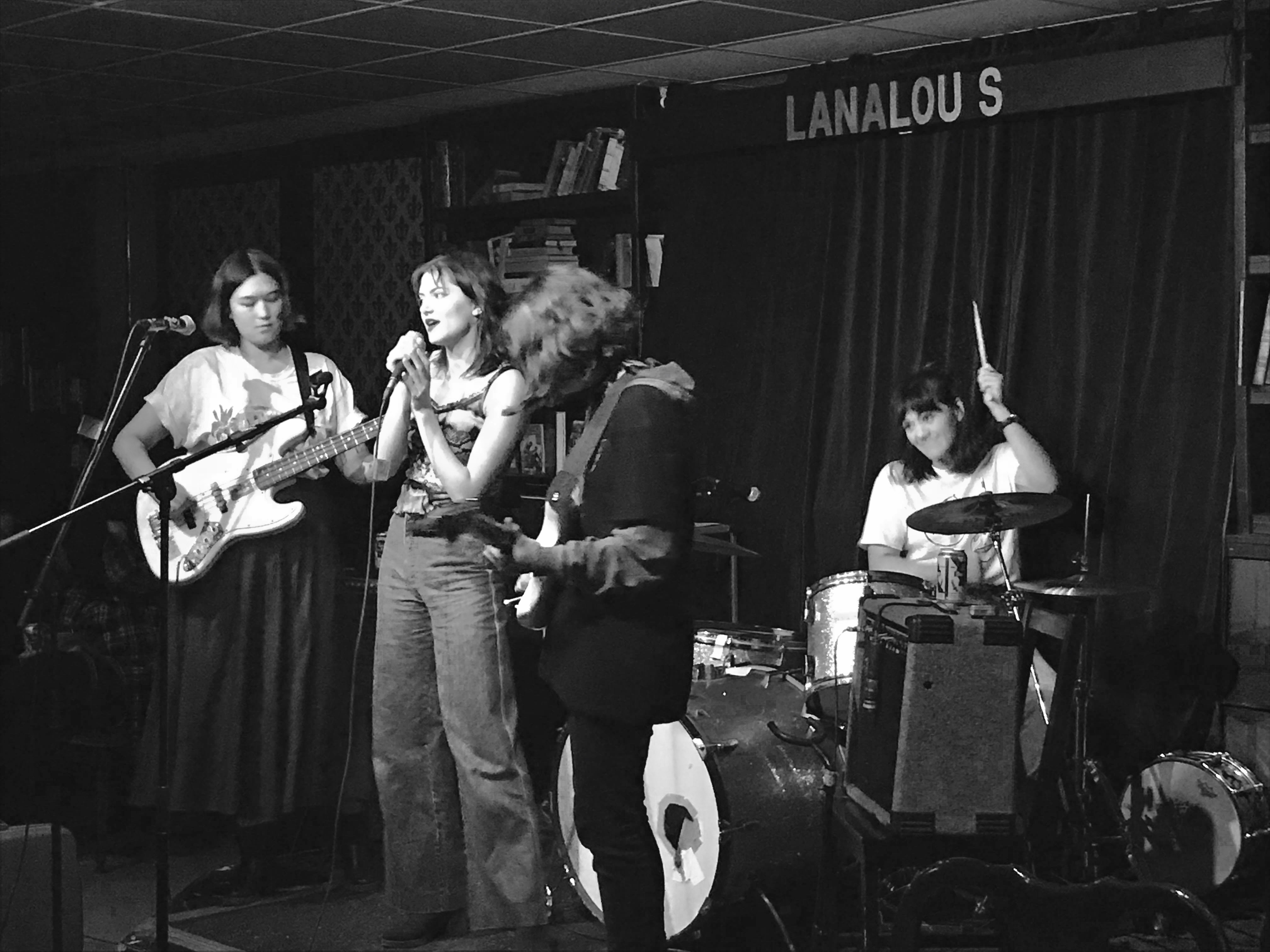 Though I’ve been a resident of Vancouver for the past three odd years, I’ve remained pretty ignorant to the local music scene. So, I dragged a couple friends downtown early one evening and got lost around East Hastings in search of what I had been missing. It was only 7 p.m. but somehow we managed to take a wrong turn into an abandoned part of town.

It might as well have been midnight, especially given how early the darkness had fallen. That only added to the atmosphere of the evening that would follow, as we stumbled our way into LanaLou’s Rock n’ Roll Eatery for a triple feature of Vancouverite garage rock.

We arrived just in time — the stage was set, the lights were dimmed and the beers were ordered as the first band started setting up and tuning in. My friends and I sat near the bar, a little apart from the rest of the crowd, many of whom arrived long before us and appeared to be mostly friends of the bands. While we waited, I drank in the atmosphere of the venue plus a fair bit of booze. LanaLou’s embraces a fun, underground style that includes a wall of upside-down paintings, gothic chandeliers, Elvis/Jesus imagery and countless horror-themed flyers strewn across the walls. They even have their own grand piano with a bass drum carrying the establishment's logo on top.

After a drink or two and some salty-as-hell edamame, the show was ready to begin. Our opener, Necking, started the night strong, playing the kind of light yet still head-banging pop-punk that I've enjoyed in other bands like LadyPills and Diet Cig. They were a simple three-piece set — their bassist and drumer both singin' and groovin’ along in harmony during the chorus while the guitarist strummed a few charming, high-pitched melodies.

Their songs had inventive stutter-step beats that switched unexpectedly before smoothly transitioning into fast, fun and shouty choruses. Unfortunately, their set ended after only 20 minutes, leaving us sadly nursing our spiked milkshakes for the remainder of the hour as the next band set up shop.

Whereas Necking had more millennial, indie rock sensibilities — from their musical stylings and black pants up to their sweaters and beanies — the next band, Pudding’s style and sound was reminiscent of the classic days of punk rock. An all-girl group, they rolled in with hiked-up jeans, tank tops, and long, messy hair. They went faster louder and harder, with pounding drums and heavy distorted guitar riffs — all four members joining in with the vocalist to scream the chorus together.

Their stage presence, constant banter and energetic performances were a bad girl style that reminded me of the Runaways. The music was loud, but one lyric rang clear above it all: “We are more than commercial girls.”

Again, though, the set felt a little too short — only 10 minutes longer than Necking — which was a bummer.

The last band, Gun Control, leaned more toward emo-punk and grunge. Because my friends were getting tired, I didn’t stick around for the full set, but I heard enough to know that I wanted to see more. The lead singer mentioned a concept album the band was working on that has, at the very least, peaked my interest.

This was my first real foray into the Vancouver music scene — something that’s integral to this city’s nightlife but is slowly being pushed further from its centre. It’s a long trek for students on campus to make on a weekday, but the night still instilled in me a drive to explore more of what the local scene has to offer and actually learn about the people who inhabit it.

I enjoyed all three bands, but couldn’t help feeling a little out place at LanaLou’s when everyone else there seemed to know each other. Before they started the set, Gun Control’s lead even called me out for taking notes. I was a complete rando, tucked into a corner drinking with a couple friends and awkwardly asking one of the members of Necking for an interview. For this little gathering of the garage rock community, I was an outsider.

Thankfully LanaLou’s is holding local shows every week and they set up early around 7 p.m. or 8 p.m., so there’s plenty of time to become a regular, and even if the journey’s a little long, at least I don’t have to leave for East Hastings at two in the morning just to see some live music. If any of you are like me — an international student tired of scrounging about for whatever big name artist is dropping by — and looking for some Vancouverite, no bullshit rock ’n roll, then give LanaLou’s a look.