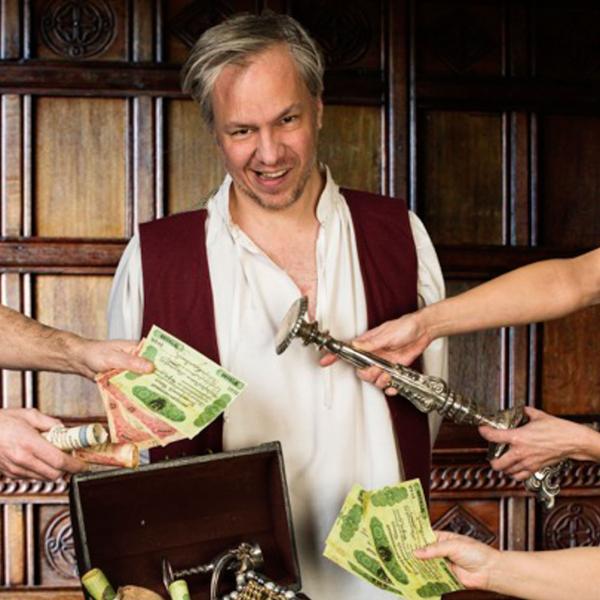 The farcical Russian tale tells of corrupt town officials’ terrified reaction of the news that an incognito inspector will soon be arriving in their town to investigate them, resulting in a flurry of chaotic activity to cover up their considerable misdeeds. A visitor to the town, Hlestakov is mistaken for the inspector and willingly takes bribes and flirts with the mayor’s wife and daughter.

Gogol’s version of the play has a rich performance history with fellow Russian author Fyodor Dostoyevsky playing the postmaster in a charity performance in 1860.

In this charade, the ensemble deliver a relentless barrage of comedy through jokes, puns, wordplay and physical displays.

“All farces like this, you depend on people doing the right thing at the right time,” said Joan Bryans, a UBC alumna who is starring in The Government Inspector. “You need it to happen or it doesn’t work. Even though there are definite leads, they are dependent on the ensemble.”

The biting humour of Gogol’s writing makes the comedy of errors a satire on human greed, stupidity and political corruption. Although set in the early 19th century, the writing and design of the play feels more modern than other works of the time.

“It’ll be set in period, but not in a museum,” said Bryans. “I don’t know if anyone else was writing this kind of stuff then, it doesn’t feel like an 1830s play. It’s much more modern than one would think.”

The set design for the Jericho Arts Centre’s wide stage is simple, using chairs, tables and doors to represent the Russian inn and drawing rooms. As traditional in farce, the opening and closing of doors are significant. Although the humour isn’t subtle, the script makes use of recognizable tropes to satirize both the genre and the characters.

“It’s not highbrow – these are not nice characters,” said Cruz, assistant director of the play. “Everything you think people are thinking, these characters are saying them to each other.”

“It does feel like watching a sitcom,” said Walters. “It’s set-up, set-up, joke and repeat. A lot of the jokes are really fast and really close together. It literally is a laugh a minute.”

The Government Inspector runs at the Jericho Arts Centre from March 25-April 17. Tickets are available in advance and at the door.