Seven plays to see at the Vancouver Fringe Festival 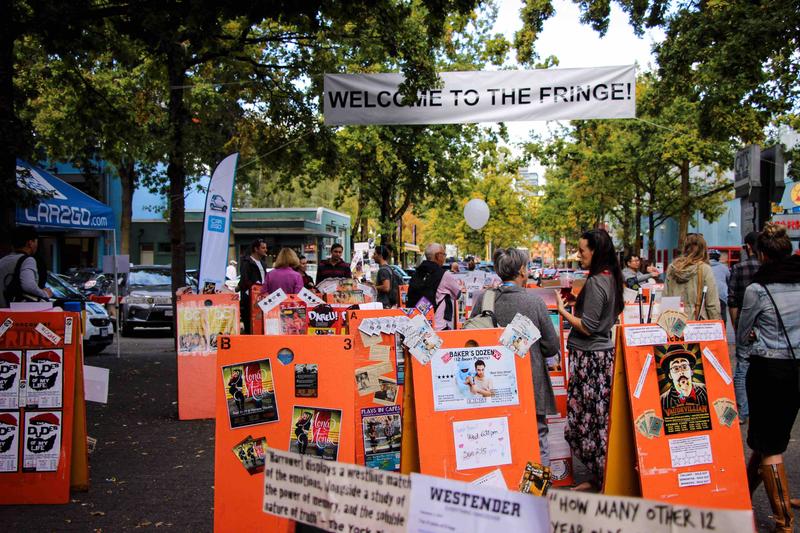 The art of Fringing is accepting that you are not Marty McFly or a wizard with a time turner and that you cannot see and do everything. Photo courtesy Clay Wong / Vancouver Fringe Festival

Once more the Vancouver Fringe Festival will be taking over the city from September 8 to 18, saturating every stage with the wild, the dramatic and the bizarre. Going to Fringe can be a daunting task for those uninitiated. There are over 90 artists performing in over 80 shows over the course of 11 days. This amounts to in excess of 800 performances scattered over 8 main-stage venues and 13 BYOVs (bring your own venues) and site-specific venues. It is madness! But rest easy knowing that the Ubyssey is here to help in making your frazzled, theatre-going lives just a bit more manageable.

The art of Fringing is accepting that you are not Marty McFly or a wizard with a time turner and that you cannot see and do everything. So we thought we would help you out and narrow down the offerings to a friendlier sum. We picked out seven plays featuring intriguing premises and the talents of our very own students and alumni, which we felt merited mention.

Opening as one of the Fringe Festival’s Dramatic Works Series, Dying City presents an affecting story of coping with loss in a post-9/11 world. The play is written Christopher Shinn and performed by Aenigma Theatre. It is about a therapist named Kelly, whose husband Craig was killed while on tour in Iraq. In the process of grieving she isolates herself from her deceased husband’s family till Craig’s identical twin, Peter, shows up and she is forced to open old wounds and trauma. The play is an intensely psychological and political drama which was nominated for a Pulitzer Prize in 2008.

Aenigma Theatre was founded by Tanya Mathivanan, who is a graduate of the UBC Theatre Program. She has always been fascinated with the internal complexities of people and how this manifests in their physical selves. In collaboration with Co-Artistic Director Sarah Melo their company’s aim is to produce works that examine the details of character’s psyches in the hope that it will help people understand themselves and others. In this way Dying City has a strong, universal appeal, since, regardless of war or politics, everyone has grieved and can relate to the struggle.

Dying City will be performed in The Culture Lab at The Cultch, from September 9 to 17. Tickets will be half-priced for the September 9 showing.

This play, from Gas Pedal Production, comes straight out of the UBC BFA acting program’s graduating class of 2016.

The play is a Commedia dell’arte, which is a form of theatre revolving around masked archetypes that has a tradition going back to 16th century Italy. What the creative minds behind Love, Lust & Lace have done is deepen these otherwise two-dimensional, stock characters typical of the type of play, turning them into nuanced and relatable figures whose experiences are more universal.

The plot follows the two sisters, Columbina and Smeraldina through their escapades in search of romance. Columbina harbors very conventional ideas of love and family, as well as a courtship with a man named Il Capitano, whereas Smeraldina longs for danger and salacious engagements with men. What follows is a heavily improvised performance involving audience participation, some scantily-clad lesbians and of course a burlesque number.

The play is sponsored by UBC and was created in the program by theatre students. It was co-devised by Chris McGregor and written by Mariam Barry, Meegin Pye, Kelsey Ranshaw, Selene Rose, Joylyn Secunda, Parmiss Sehat, Elizabeth Willow and Francis Winter.

See it at the Firehall Arts Centre from September 8 to 17, with tickets for a show on the 11th selling at half-price.

Following in a long tradition of dramas hinging upon the guilt or innocence of a character and much like Twelve Angry Men or the premise of a good old Hercule Poirot mystery, the character Justin Belmar of The Dance Teacher occupies a place of uncertainty for the audience.  As his character’s nature swings back and forth like a pendulum between guilty and innocent they are forced to question everything, and quick judgements are often shown to be the products of unfair preconceptions.

The difference is that, unlike many plots where urgency to deliver justice drives the story forward, in The Dance Teacher it is already too late for that. The play opens with Justin proclaiming his innocence after already spending six years in jail. He is preparing to appeal his case and perhaps regain his freedom, until he is murdered before his voice can he heard.

The play then tracks Justin’s life before it all was undone, beginning when he was a university student practicing dance and moving to the somewhat unsettling reunion with a dance teacher he had as a child, Mr. Taylor, who is also a suspected pedophile. As events unfold the audience comes to know the man who is at first labeled a criminal, but who may instead be a just a victim of hasty conclusions unfortunate circumstances.

The play was written by former UBC Psychology student, Gerald Williams. Graduate of the Medicine and Science program, Dr. Yvette Lu stars as Detective Spinner, who is the lead investigator on Justin’s case.

The Dance Teacher will be previewing at The Havana on September 2 and opening at STUDIO 16 from September 8 to 18.

And Bella Sang With Us

One of the reasons that Fringe is such a unique event is that it gives performers the licence to explore the history and issues of Vancouver’s past without being too self-serious or high-brow. And Bella Sang With Us is a perfect example of this as it examines the ugly nature of sexism in 1912 with a dark sense of humor and a healthy measure of song.

This production follows the historical figures of Constables Lurancy Harris and Minnie Miller, Vancouver’s first female police officers, as they arrive in the City’s Downtown East Side/Chinatown to investigate a case of “female morality.” What follows is a noir-ish journey through a city rife with adversity and corruption.

The play will be performed at VanCity Culture Lab, Vancouver East Cultural Centre, from September 9 to 17 as part of the Dramatic Works Series.

The work is a behemoth that causes many a bookshelf to sag and which most read either for class or when they are retired and have nothing else to do. Now Tolstoy’s epic, one of the greatest literary works ever written, is coming to the stage in the form of a one-man show performed by Ryan Gladstone.

By some witchcraft or just ridiculous talent, Gladstone aims to convey a plot spanning 1444 pages and involving 632 characters in the reasonable span of a stage performance, with only a few funny voices and some key sound effects to assist.

Amid what sounds more like a test of the actor’s endurance than anything else rests a key thesis which Gladstone hopes to convey. He posits that in a book as complex as this, where morality is messy and abstract, meaning exists in the smaller, simpler actions and events between people and not in grandiose battles or balls. However, if this all sounds a bit too academic for your tastes, do not be deterred, for the production is described as straddling “the line between comedy and tragedy, farce and sermon, low brow stand-up and history lesson.”

War and Peace was produced by Monster Theatre, which was founded in 2000 by Ryan Gladstone. Gladstone holds an MFA in Directing from UBC.

The play will be showing at the Carousel Theatre from September 8 to 18.

Till Death: The Six Wives of Henry VIII

Apparently putting on a one-man rendition of War and Peace is not already impressive enough, since Ryan Gladstone has also written and directed this one-woman show about the six wives of King Henry VIII. In roughly 70 minutes Tara Travis assembles what seems like the perfect comedic ensemble of the six wives as they meet progressively meet each other in what appears to be a waiting room in the afterlife.

If you felt that superheroes were not represented enough in this list then brace yourself for The Antagonist, by Daniel Galiano and directed by Matt Clarke. If you ever watched a superhero movie and wondered what on earth your average, run of the mill villain got up to on a given day, then the exploits of evil mastermind Eugenius (Sean Amsing aka Kaboom Atomic) might fill that void. The audience will follow this comic book bad guy through the minutiae of his daily life as he seeks to overthrow his nemesis and finally take over the world.

The play is largely inspired by Galiano’s time working at the Rio Theatre, where he would encounter all kinds of ravenous fans, all hungrily awaiting the next piece in the Marvel or DC franchise.

Matt Clarke is a graduate of the UBC English Literature program and one of the play’s stars, Emma Cawood is a student in the English Linguistics program.

The Antagonist is showing at The Cultch Historic Theatre from September 9 to 18. Tickets are half-price for the show on September 10.

It is worth noting that this list is not a complete list. There are countless other plays which we just did not have the space to cover, many of which also involve UBC students and alumni. So see as many as you can! There are more talented actors and exciting productions than can be comprehended, and it is a great way to support local theatres, actors and production companies.

There is a $3 membership fee to attend. Tickets cost $14 and can be purchased at the Fringe Box Office or the venue starting 45 minutes before the show. You can by Frequent Fringer ticket packets costing $40 for four performances and $90 for ten. For more information visit www.vancouverfringe.com.