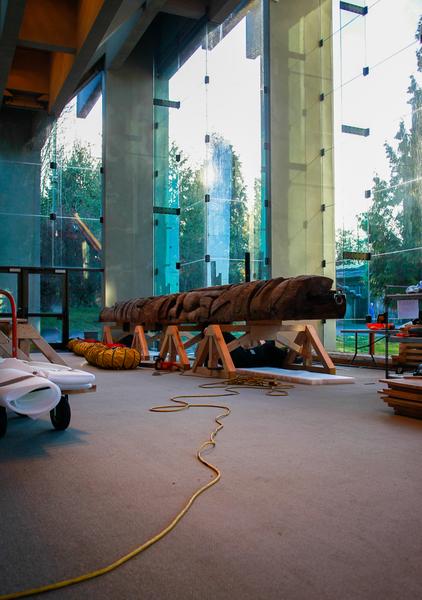 Most of the totem poles that are usually on display will be now be featured in a new exhibit in the O’Brian Gallery next door. Elizabeth Wang

“Everyone here is a future ancestor,” said Skwxwu7mesh and Sto:Lo storyteller Cease Wyss, before performing the homecoming song Snowbird.

A song about homecoming seemed at odds with the situation — seismic upgrades in the Museum of Anthropology mean that the totem poles adorning its Great Hall were celebrating their last days in the gallery before being transferred into another area for the duration of construction.

Though it seems like this circumstance shouldn’t be cause for celebration, the atmosphere at MOA's new exhibit, Shake Up: Preserving What We Value, was jubilant. Featuring a wide array of dancers and musicians, the elements of this exhibition opening were united by a single theme: preserving heritage in a fragile world.

The opening ceremonies kicked off with a moving welcome to Musqueam territory from weaver Debra Sparrow, who called upon visitors to contemplate the importance of protecting not only the tangible aspects of our heritage from seismic threats, but also the intangible knowledge that holds our cultures together.

Despite delays in construction which limited the extent of the exhibit, the opening ceremony still offered in an impressive range of activities for guests of all ages.

In the museum’s presentation circle, Wyss regaled the crowd with stories of how the Coast Salish people survived the Great Flood. For younger museum-goers, there was a hands-on learning lab about earthquakes. For the academically-minded, there was a lecture series featuring a presentation on Balinese “volcano culture” by Dr. Thomas Hunter, professor of Asian studies. And to finish the day, there were classes in traditional Indonesian drumming, as well as an earth-shaking performance from the Chibi Taiko percussion ensemble.

For co-curator Dr. Jennifer Kramer, the inclusion of performers from Japan and Indonesia “just made sense” during the planning of this event. She explained that there is significant influence of seismic activity that is shared across the cultures of Japan, Indonesia and the Coast Salish peoples.

Kramer also confirmed that construction is currently scheduled to close off the Great Hall by the beginning of February.

Most of the totem poles that are usually on display will be now be featured in a new exhibit in the O’Brian Gallery next door. Museum attendees will have the opportunity to see the poles up close, as they will be displayed on their sides.

Worried about missing out on the beauty of the museum’s Great Hall during construction? Now visitors can experience it without even having to enter the room. Virtual reality headsets, developed in partnership with UBC students at the Emerging Media Lab, allow visitors to explore what the room looks like. They will be available for the duration of the construction, and there is also a touchscreen display that gives the same 360º view.

Though it may seem that the tangible parts of our cultures are the ones most threatened by natural disasters like earthquakes, our intangible heritage deserves the same protection in our current cultural climate.

The preservation of all aspects of culture is integral to MOA, and this ground-breaking new exhibit embodies that sentiment perfectly.

Shake Up: Preserving What We Value will be on display at the Museum of Anthropology until fall 2019.