Keltie Forsyth on Dungeons and Dragons and powerful women in theatre 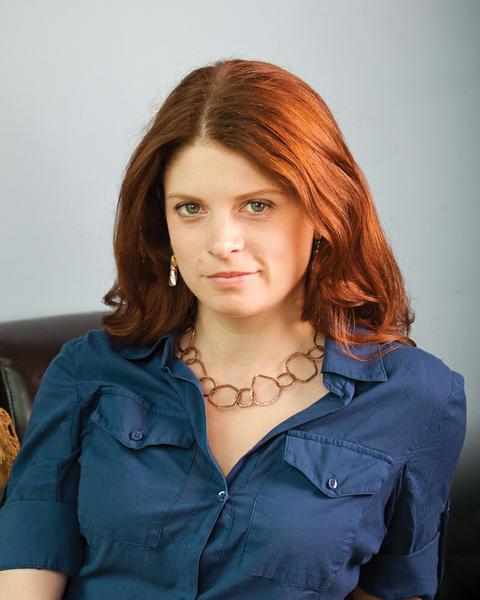 The actors cheered. Within seconds, the team of theatre students become a squadron of medieval-age knights with a mission. Swords appeared out of thin air; someone brandished an absurdly huge battle-axe. On the other side of the room, the other half become monsters. Steel clashed on steel, and the small, plain theatre studio became a war zone.

This was the fourth day of rehearsals for She Kills Monsters, UBC’s upcoming production of Qui Nguyen’s hit play about a high school teacher, Agnes, who finds relief from her sister’s death in the world of Dungeons and Dragons — killing monsters both fictional and personal along the way.

A returning director to UBC Theatre, Forsyth said that She Kills Monsters aims to be bombastic in more ways than one.

“We’re really at the pitch of silly,” said Forsyth, gesturing to a character being fictionally disemboweled.

As her cast moves through the beginning stages of rehearsal, they’ve enlisted veteran fight choreographers Mike Kovac and Ryan Bolton to turn Agnes and her party into a team of bona fide fighters.

“They’re doing this for four hours a day,” said Forsyth as her actors moved through the fight sequence. “We’ve got a very athletic cast. They’re dancers and gymnasts — people with athletic backgrounds. But it’s still a new way of moving for all of them.

Beyond the combat, She Kills Monsters promises puppetry, props and costumes to match its fantastical source text, making it UBC’s most technically ambitious production this year.

“The number of specialty costumes, the amount of fighting, the number of puppets and the man-hours that the props department is putting in to making puppets is crazy,” exclaimed Forsyth.

“I don’t know if you want to spoil this, but there is a dragon in this play. We are building a dragon.”

On the afternoon of the first day of rehearsal, the 25 members of Forsyth’s team gathered in a circle, chose their characters and played Dungeons and Dragons.

Forsyth, who started playing D&D in her mid-twenties, is more than familiar with the almost-transcendental element of the role-playing game.

“I’m a huge geek and I’m a huge theatre nerd,” said Forsyth. “I love working with the fantastical ... it allows us to do things on stage that we wish we could do in real life.”

Within a few hours, her cast was sold on it, too.

“They all had the moment that Agnes has in this play — they went from ‘this is kind of stupid, I’m just sitting here pretending I’m an ogre’ to getting their first kill, or getting to do their first cool thing,” said Forsyth. “And they go to ‘oh my god, I want to do that again.’”

Dungeons and Dragons peaked in popularity in the 80s, but the role-playing game is enjoying a resurgence in relevance. Whether it’s Stranger Things or sheer nostalgia, 40 years after its creation, Dungeons and Dragons has become something its creators never anticipated — cool.

“People from my generation are very nostalgic for the 90s,” said Forsyth. “D&D has entered the cultural zeitgeist, and it’s kind of a cool thing now.”

At its core, D&D does the same thing a good play does — it transports us. Both create a world where, for a few hours at least, we can take a rain check on reality.

“I think these days, the world feels quite grey,” said Forsyth. “Having a wonderful silly night at the theatre will be a great thing.”

Then and there, here and now

Aesthetically, She Kills Monsters reaches back to the ’90s and into the fantastical — thematically, the problems it explores are very current and all too real.

“This play is about the problems that young people face,” said Forsyth. “It’s nice to do a show that they [the actors] can relate to. It’s about the things that they are experiencing.”

While She Kills Monsters might involve decapitating the odd monster, that doesn’t preclude it from emotional depth. The play is fundamentally rooted in grief, escapism, and identity — especially for its leading women. In that respect, She Kills Monsters might be more timely than ever. Forsyth points out that in She Kills Monsters, it’s the women who get to lead the way and kill the monsters — something uncommon in a medium where traditional gender roles have been entrenched in text.

“It’s a bunch of girls with big swords just killing stuff, and that’s what’s special about this show,” she emphasized. “Women don’t get to do this kind of thing onstage that often. When they do, it’s often on the receiving end, as victims of sexual violence.

“I think in the era of #MeToo, reframing women as strong and powerful instead of victims is always a good thing,” she added. “I think that’s why we’re doing this right here, right now.”

Forsyth’s cast and crew are just getting started. Over the next month, She Kills Monsters will go through the various phases of tech; sound, lights, finalized props, actors, and space all uniting to create a world onstage.

“At the end, Dungeons and Dragons is about sitting around a table and imagining a great adventure,” said Forsyth. “We want the audience to get that sense of being invited in to imagine with us.

“We want people to crawl over their seats, pick up a sword and kill a monster.”