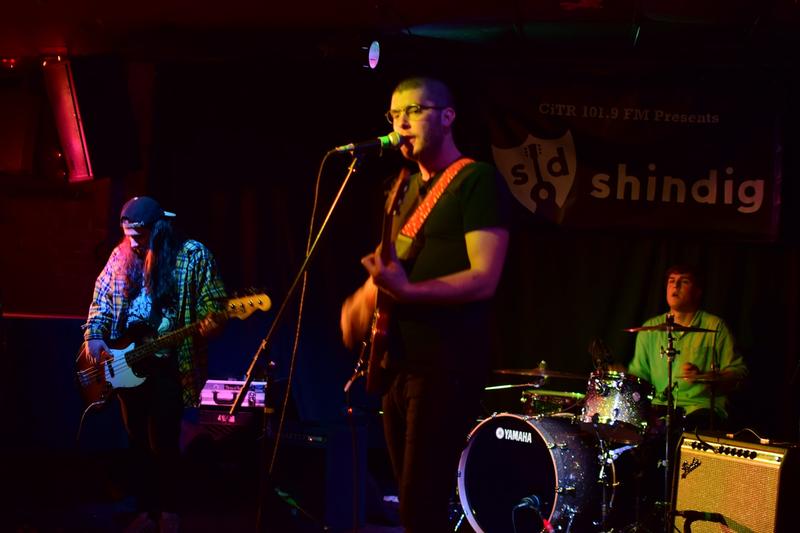 “That’s the thing about all the bands in the Vancouver music scene,” said Porter Bommes, lead vocalist for Soft Haze. “No one really gives them enough credit. All the bands that we play with are so good.”

Soft Haze is another talented band whose independent roots and coherent sound exceeds expectations — although Bommes is too humble to admit it. After applying to CiTR’s Shindig competition at the last minute, Soft Haze was picked up for the event.

“I didn’t look at [the prizes] too much,” said Bommes of the band’s decision to go out for the competition. “It’s good exposure anyway.”

Soft Haze put out two EPs this year. Their self titled EP came out in January and Too Human was released only 9 months later which was this September. Bommes is looking forward to recording a full length album this January to be released on vinyl. Recording an album takes time and although the band managed to put down Too Human in just two days, a Shindig win could help Soft Haze realize their album recording dreams.

“You get studio time for sure though, if you win [Shindig],” said Bommes. “So that’s always good because it’s expensive.”

Bommes began Soft Haze in 2012 as a two piece garage rock band. Their sound is fuzzy, low-fi garage pop and their new EP – recorded by Rolla Olak and Jensen Gifford at Tone Shed Studios – has influences ranging from punk to old-school country. The band has rotated members a couple of times and gone on hiatus once due to Bommes’ travel pursuits.

“I came back [from Germany] and recorded the [Soft Haze] EP with Felix Fung at Little Red Sounds,” he said. At that point, the lineup was in flux: “I just had Salem from The Shakes playing drums and Code from The Pretty’s playing bass so that was nice.... They weren’t in the band, it was just something I wanted to do to get it off the ground.”

Bommes is quietly ambitious, writing the lyrics and main melodies for all of the band’s songs while relying heavily on the outstanding talent of his bandmates to bring his ideas to life.

“I get a melody in my head and then I form lyrics around that melody and [from] the feelings it evokes,” he said of the process. “Then I’ll go home and write the guitar parts, then I’ll go to the band with the song ... We fine tune it a bit, like, ‘Maybe this would sound good here.’ It happens really organically.”

“I’m kind of embarrassed cause sometimes my lyrics are weird,” he said. “I just start singing it and don’t tell [the band] what it’s about ... they just kind of figure it out eventually and then they usually make fun of me for it!”

It’s important for Bommes to have a good relationship with his bandmates, even though it has been challenging to pin down a solid group. It was easier for Soft Haze to record when the current lineup — including Ian Kinakin on rhythm and lead guitar, Scott Postulo on bass and Jeremy Futter on drums — was solidified. “Cody and Salem [are really good musicians]. They picked up [the music for Soft Haze] really quick, but [Too Human] had a raw vibe because we weren’t thinking about it too much,” said Bommes.

Although the Shindig show will be the last for guitarist Kinakin, Bommes is looking forward to recording and continuing to play local shows with whatever members are game to come along for the ride. The band’s first music video for Bacon (or Vices) comes out later this month. They are excited to be selling t-shirts and tapes at their Shindig show on November 24 where they will be playing alongside Rainbow Road and Wallgrin.

“I listened to a lot of the bands playing Shindig. It’s pretty diverse, a pretty eclectic mix ... Owl Scowl is really good and Dried Out — I like them a lot too,” said Bommes of his competition. “Everyone has talent!”