Sound House is bringing bonfires, beer and live music to the Haida House at the Museum of Anthropology 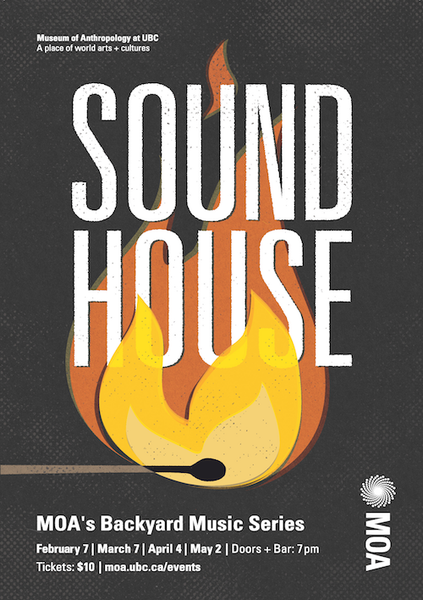 At its core, the goal for Sound House is to bring people from across the university together. Courtesy Museum of Anthropology

The Museum the Anthropology (MOA) may conjure up ideas of tall ceilings, magnificent house posts and world-renowned art installations. Marie Wustner, MOA’s new curator of public programming has an additional vision: of bonfires, beer and live music in the Haida House.

Sound House, a new event series curated by Wustner, is bringing musicians and performers around to the back of the museum where the house designed by Bill Reid sits.

“We’re not just opening up the Haida House, we’re putting stage lights in there, we’re bringing in full sound. [It is] the biggest object that the museum has … and we’re utilizing it in a way that we never have before on a regular basis.”

Wustner, who has worked as a professional artist and with youth, is excited to focus on making culture more welcoming for students on campus. Her vision for Sound House is a place where students feel like they can relax and “enjoy art and culture in a way that is really natural.”

“There’s no reason why arts and culture has to feel inaccessible who want to have a more low-key experience,” she said. “... When I was in university, I spent so much of my time studying and trying to absorb knowledge that when it was time to relax, I wasn’t trying to necessarily learn. So when we’re trying to create programming for students, we need to be able to provide both environments.”

Wustner is also working with students to create the programming, helping to further ensure that the performers will attract student interest.

The first Sound House event is on February 7, and will be kicking off with a line-up of local Afro-Cuban beats artists. Kutapira will be the first to grace the stage, with their five-piece percussion ensemble that blends sounds from Zimbabwe and West Africa. The night will then turn to the brassy sounds of Camaro 67, a 10-piece funk band.

“The bands are really excited about it, and that’s what gets me really pumped because when the artists are excited about the concept, they bring a really strong energy to the crowd,” Wustner said.

This first evening has already sold out all 100 tickets, so getting into this exclusive event may prove difficult this time around. But Sound House already has three other dates scheduled: March 7, April 4 and May 2. And while Wustner can’t announce the future lineups just yet, she was able to give one hint for the next event.

At its core, the goal for Sound House is to bring people from across the university together.

“It’s an opportunity to create a community across the broader UBC campus by having a backyard house party — everybody come as you are and celebrate arts and culture. … We’re on the West Coast, who doesn’t like music around a fire hanging out with their friends?”