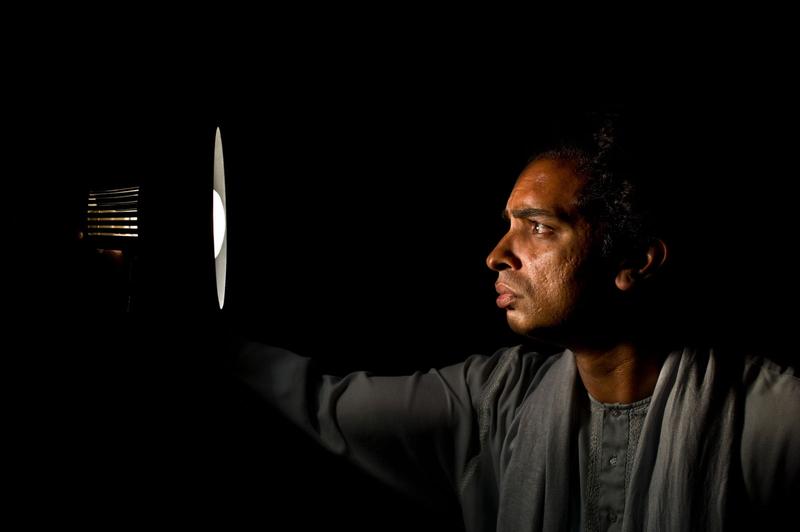 I arrived at the Historic Theatre of the Cultch as a nervous and apprehensive outsider, only to be welcomed into two wonderful, diverse families over the course of one night. One real — the assorted characters of the Cultch community celebrating Vancouver Diwali at the Cultch — and one unreal — the magic of Southern India, conjured through the magic of Jacob Rajan's performance in The Elephant Wrestler.

Guests, soaked by the rain, were invited to warm up at the show’s opening reception, with complimentary biriani provided by Siddhartha’s Kitchen on 4th Ave. and Commercial Drive. Rohit Chokhani, the artistic producer of this year's Vancouver Diwali Festival, explained that the festival opener, the excellent Piya Behrupia, was a representation of northern Indian folk songs and dance, having received funding and support from the Globe Theatre in London in order to present their version of a Twelfth Night adaptation. Representative of another half of the Indian storytelling tradition, The Elephant Wrestler is essentially a one-man show, although musician Adam Ogle still used a number of characters in order to represent southern Indian Chai-Wallah storytelling and to showcase the diversity of Hindu theatre.

The Elephant Wrestler is a play that reflects the contrasting characters and concepts of modern India — how the Chai Wallah stories can exist in the age of Starbucks and how strong females can coexist with father figures. We follow Kutisar, a Chai Wallah whose life is turned upside down when seven orphan children arrive at his tea stand, whose songs draw a crowd larger than Kutisar has ever had — and bring more profits in a day than he makes in a month. The singing also attracts the unwanted attention of the organised criminals of Bangalore, as well as the fateful protection of Officer Punchkin — whose relationship (or lack thereof) with the eldest daughter sustains much of the action. A group of individuals, with interests and identities in the modernization of India, come together to form a remarkable family — but the unique and slowly changing identities of each character also ensure its undoing.

Officer Punchkin is named as “the elephant wrestler” — a man of large stature who wrestles with his responsibilities to his family, to his police service and to his own needs. Choosing which responsibility he finds most important is what defines the course of the narrative, both directly and indirectly.

But the real elephant wrestler of the piece, at least to me, was the man who portrayed him, the main narrator, the seven orphaned sisters, a chicken and most remarkably, the moon. Chokhani counted 17 roles which, unbelievably for such a concise piece, seemed to be too low a number instead of an exaggeration. This was not only a showcase for an individual actor's capacity and talent though. David Ward, the musician, provided a vivid and real soundtrack of wonder and terror. Meanwhile, under Justin Lewis’s direction, Rajan went out into the audience, flirted, antagonised and literally brought the characters of the family to the spectators and the spectators into the family.

In our last moments together, Kutisar said that life is like a cup. It is yours alone to decide what fills it. He allowed himself a cup of chai before the lights fell, finally being able to enjoy his life's work, having made the chai throughout the course of the play.

The people of the Cultch seemed to have decided what life their theatre should take on in Vancouver — Tony Wong, the vice chair of the organization's board, spoke of the creative risks the Cultch has taken. Projects such as the Grow-A-Show program that allows local artists to use the spaces and theatres to realize their vision, the ticket donation program that supports local charity fundraisers and the experimental shows put on from New Zealand to India all show an inclination towards making decisions based on cultural merit as opposed to financial gain.

The greatest reward for risks that the Cultch has taken seems to be the diverse family that they have established — a half-hour reception preceded The Elephant Wrestler’s premiere, where board members, artists, designers and supporters alike all shared their stories. The production began when one person had pitched a show to another, which in turn, brought more people together. Another speaker had seen the show in its earliest incarnation in a living room. One cultivated a bromance, another had helped accommodate the space to another performance's needs. It felt like we were watching a family — one not dissimilar to the one The Elephant Wrestler movingly portrays. Its very existence at the Cultch is evidence of their continued commitment to diversity and creativity over profit and turnover. I hope that with The Elephant Wrestler, Indian Ink Theatre and the people of the Cultch can enjoy the fruits of their labour just as much as I did.