The Hatch provides a space for approachable art 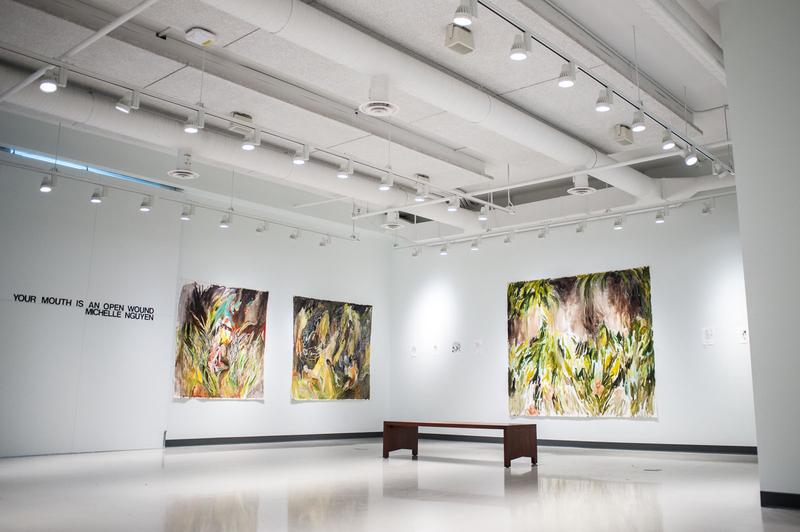 “It goes back to the idea of the Hatch being this first-time space, this training and working space,” Greer said. File Kosta Prodanovic

Amidst all the formal and academic arts institutions at UBC, the Hatch stands out as a more approachable place for UBC and non-UBC students to showcase their art.

As the only student-run art gallery on campus, the Hatch provides an exhibition space that is more accessible to artists and curators who are exhibiting their work for the first time. It acts as a starting point for creators going into the working world.

The gallery also provides “a space for dialogue about art that’s a little bit more inclusive, more approachable than some of the larger institutions like [the Museum of Anthropology] and the Belkin,” explained Maxim Greer, the manager and director of the Hatch. “It’s a lot harder to walk into an institution that’s been around for a long time and just have your work automatically displayed ... So it’s a starting point for a lot of people.”

The gallery has held very diverse expositions and touched on a variety of different topics, ranging from marginalized identities and how their bodies are portrayed in art, to the historical Palestine and Israel conflict and even climate change.

“The shows are political. I think to ignore politics right now is problematic,” said Greer.

Although past exhibits have been controversial, Greer said that people are always welcome to visit the Hatch and discuss the art being displayed. He wants the gallery to be a “free space of expression” that brings everyone into “open dialogue and conversation” about art.

The Hatch holds a call for submissions every June for their annual schedule of programmed shows, which is organized by a jury and the director of the gallery. Since the Hatch aims to be a more approachable platform for students to display their art, the process of curation focuses more on the “artistic quality and creativity” of the pieces, as well as the strength of the ideas and the message behind the work.

As opposed to the other, larger institutions on campus, the Hatch happens to be a place where you don’t need to have a “long list of accomplishments” to showcase your art. For example, Our Bodies are Bodies — one of the most recent exhibitions — was very unique in that there were “eight students from UBC that got to exhibit their art in one show.”

“It goes back to the idea of the Hatch being this first-time space, this training and working space,” Greer said.

In addition to the criteria involved in assessing submissions, Greer also added that one of the main focuses of curation that he’s developed out of his studies is the “placement” of the work being displayed and how you “bring different works into conversation with each other”.

Currently the Hatch is also holding a mini-exhibit where they are showcasing pieces of the AMS’ permanent collection, rotating between different works owned by the AMS every two weeks.

“It was an idea that had been developed in response to the idea that not enough of the art from the permanent collection has the opportunity to be exhibited to students because there [are] over 70 pieces in the collection and there’s usually one show scheduled per year,” Greer explained.

The idea of cycling between the different works was developed by a previous director and Greer believes it gives many pieces in the collection “more of an opportunity to be seen by the public.” The outcome has been very positive and Greer said that “it’s been really nice to come in and out of the gallery and seeing people looking at the art and reading about it.”

According to Greer, this idea has also helped to bring awareness to the Hatch and to the fact that they have an amazing collection.

As a part of the AMS, the Hatch is in contact with a lot of student bodies on campus. This year, the gallery is actively trying to become a louder voice within the UBC community by interacting more with students and other AMS clubs. Moving forward, the Hatch hopes to partner up with clubs to combine art exhibitions with events like workshops. For instance, Our Bodies are Bodies had a workshop on consent and rape culture facilitated by the SASC.

The gallery hopes to become more active and expand their programming “outside of just being this gallery that’s open from 12 to 5 [p.m.] that people can walk in and out of.”

Lastly, Greer hopes to program an end-of-year catalogue with the goal of documenting all of the shows for the next year to give students “opportunities to write about art and to look back at the art that we have exhibited.”

It all goes back to the Hatch being a gallery that aims to be more inclusive and interactive with students, giving people more accessible opportunities to showcase their work and talk about art.