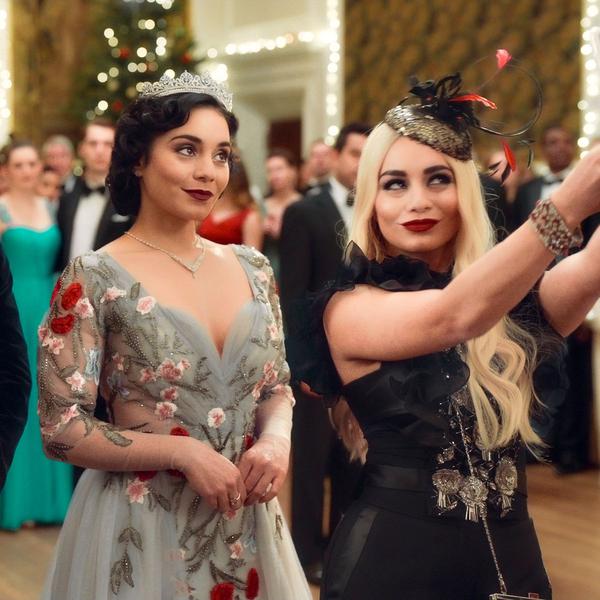 The Princess Switch: Switched Again is a harebrained and frankly rather unnecessary sequel. Netflix

The release of Netflix Christmas movies has become a yearly tradition, and it seems, so has the presence of the affable Vanessa Hudgens in these films.

But Hudgens or not, The Princess Switch: Switched Again is a harebrained and frankly rather unnecessary sequel.

Before we dive into Netflix’s latest way to spread Christmas cheer, we are presented with a helpful recap of the first film in the franchise that plays out exactly as if we were reading a greeting card.

For those who haven’t watched the first movie, Stacy, (played by Hudgens) a talented young baker from Chicago, is selected to enter a prestigious baking competition in the fictional Belgravia. While there, she runs into Lady Margaret Delacourt, Duchess of Montenaro (also played by Hudgens). The plot that then ensues is your classic switcheroo-plot which ends with both of the Hudgens’ characters happy in love.

The sequel finds pair two years after the events of the first film, Stacy, who is now Princess of Belgravia, is happily married, while Queen-to-be Duchess Margaret is royally overwhelmed with sadness and responsibilities. The only possible solution Princess Stacy has for Margaret is to reunite with Kevin, her past love who she broke up with between the first and second movies.

Hallmark holiday movies are known to be frivolous and nonsensical but their undeniable charm is what, arguably makes them worth our time. The Princess Switch: Switched Again fails to deliver in this one very key aspect. The film starts off by being quite dull. All the characters are busy playing Cupid and it’s a little exasperating to watch. The film picks up the pace with the arrival of Margaret’s look-alike cousin, Fiona, played by, (you guessed it) Vanessa Hudgens!

While the change in pace works in the favour of the film, the plot that follows definitely does not. The introduction of a number of bizarre characters, each with their own ‘evil’ motives unnecessarily complicates the already headache-inducing plot. None of the characters are fleshed out enough to have any real impact to the story and some of them are forgotten midway into the film only to make sudden reappearances towards the end.

Unlike the first film, the characters switch places at two different instances this time around. The second switch happens so late into the film that there is not enough time to build up the drama needed to establish the new development and hence fails to be even mildly entertaining.

I began to wonder why this film is categorized as a romantic comedy given the fact that there is a clear absence of both romance and comedy for the majority of its run time.

The only person who seems to be having fun here is Vanessa Hudgens. She seamlessly switches between different roles and accents and even manages to not make a mockery of herself while playing the over the top Princess Fiona (a difficult task to accomplish). The other actors have much less to do, but both Sam Palladio and Nick Sagar — who play Prince Edward and Kevin respectively — are likeable enough.

But ultimately, the movie should never have been made in the first place and the film, much like most of the plot points in it, is easily avoidable. Give this one a miss, life is too complicated as it is!