The Town Without Television explores what tech transitions leave behind 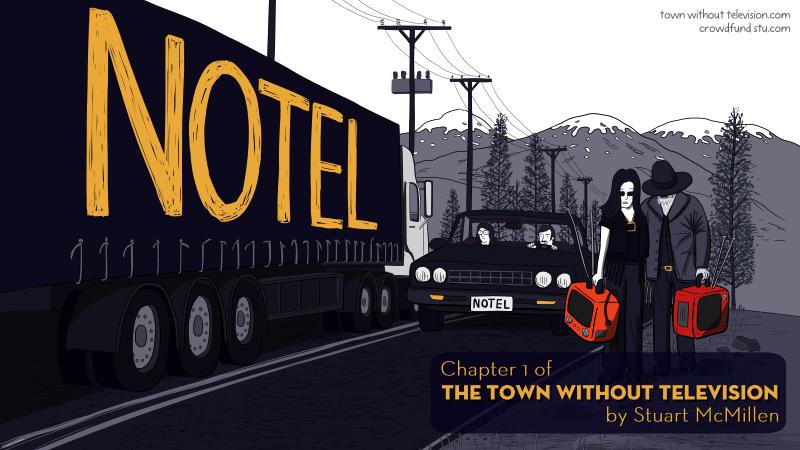 Currently, only Part 1 of the webcomic has been released. Courtesy of Stuart McMillen

My preteen sister’s friends know her Roblox avatar better than they know her face. Not to be a nostalgic geezer, but when I was her age, my tech entertainment was limited to watching The Incredibles on DVD (as a treat).

It feels too early, and too simplistic, to claim that an online upbringing is worse than an unplugged one.

Like many in the digital generation, I have a negative gut reaction to unequivocally harsh criticisms of new media. Attacks on TikTok dances and Snapchat filters often feel like attacks on their main user base: teenagers – especially young women.

The Town Without Television, a new webcomic by Australian cartoonist Stuart McMillen, takes us back to the psychological impacts of one of the major tech transitions of the past century.

How did the first generation of network television impact kids? And how can researchers mobilize to understand new tech’s impacts before the latest innovation has already taken over, and has already begun to move on to the next big thing?

“The Town Without Television”

McMillen portrays the late UBC psychology professor, Dr. Tannis MacBeth, as she raced to document the “before” and “after” of the last Canadian town to adopt TVs in the 70’s.

The study was urgent as TV had already taken off in the rest of the nation. The small BC town, which MacBeth codenamed “Notel,” was slated to receive TV by the end of the year. It had only been neglected until that point due to its geographic isolation in the Rocky Mountains.

Currently, only Part 1 of the webcomic has been released. It introduces us to Macbeth and sets the scene. Parts 2 and 3, which will explore the impacts of TV on individuals and on the community, will be released within the next couple of months.

The way comics integrate text and visuals is uniquely suited to breaking down complex concepts while engaging readers.

From Sunday morning cartoons to manga to infographics, the medium is already familiar and accessible.

“It’s an experiment that’s well-documented, but relatively unknown on the web,” said McMillen.“I feel like if they did all these thousands of hours of work into the experiment that I should try and present it in as compelling a way as possible.”

“One of the conclusions of [MacBeth’s] book is that, in almost every way, television had a negative influence on people, even when it came to things like gender stereotypes,” said McMillen.

These research findings are specific to 70’s programming, which featured a lot more blatant sexism and racist than present-day Netflix’s comparatively diverse selection.

Still, MacBeth’s research demonstrates the influence of media on childrens’ perceptions of the world and of their own potential.

“Previously, there was big participation in sports matches and community suppers, and the sort of things where the town would come together,” said McMillen. “Whereas when the default thing that people did with themselves every night was just go home and watch TV, that reduced participation.”

Community suppers and sporting events obviously haven’t been an option for the past year.

McMillen hopes, if not to get people off their phones, to spark new appreciation for the community gatherings that we’ve missed and may soon be able to rejoin.

Social media can also make TV and other digital entertainment into an area of social bonding. Like most societal change, technology innovations are rarely solely damaging or purely progressive.

“TV came around before I was a child, and I watched a fair amount of it myself,” said McMillen. “It's so much part of the background noise of the world that we live in at the moment, in the ways that we receive information.”

“It definitely makes you think about the landscape that we've inherited.”