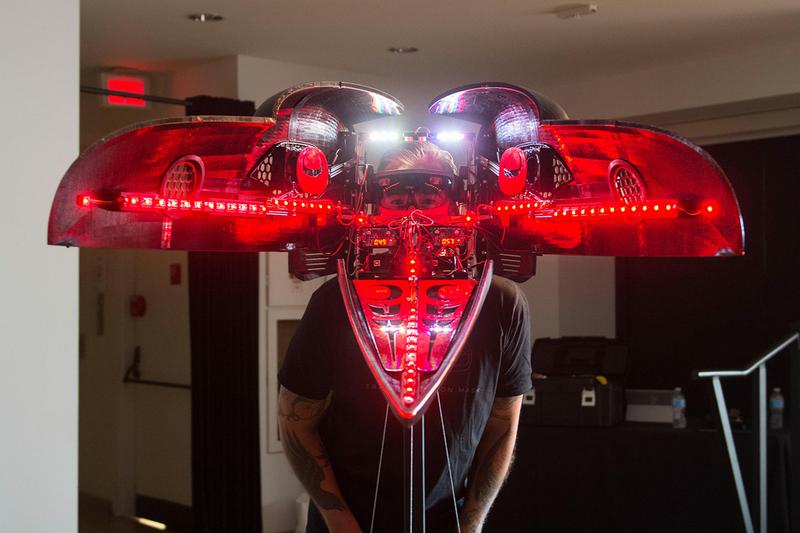 Hunt collaborated with Microsoft to create the project. Future collaborations are being planned. Courtesy Museum of Anthropology

From November 30 until December 2, the UBC Museum of Anthropology hosted an exhibit entitled Transformation Mask, showcasing a piece of art that was crafted through a collaboration between Heiltsuk artist Shawn Hunt and Microsoft. Hunt offered The Ubyssey more insight into his background as an artist, his latest creative collaboration and how he incorporates technologies into traditional art forms.

From a young age, Hunt was a creator.

“I grew up with an artist father. My dad’s studio was at our family’s home, so I was constantly around a working artist. My mother saw that my brother and I were creative children and always encouraged our artistic development from a young age,” Hunt wrote in an emailed statement to The Ubyssey.

This creativity continued into adulthood, as Hunt completed the studio art program at Capilano College and a BFA at UBC before beginning his professional career with his father as his mentor. Ten years later, Hunt began an apprenticeship with Vancouver-painter Lawrence Paul Yuxweluptun.

Hunt strayed far from his traditional mediums of painting and sculpting with his newest piece, “Transformation Mask.”

“I’ll get an idea and generally it’s the idea that leads me to the medium. With the ‘Transformation Mask’ it was the reverse. It was the exposure to the different tools/mediums that inspired the idea.”

Hunt received this exposure when he was invited to come to The Garage, a Microsoft makerspace and engage with the technology available there.

“Stacy Mulcahy, who runs The Garage, toured me through the facility and showed me all the different tools that they have ... the three main technologies that I keyed in on were robotics, 3-D printing and modified reality through the Microsoft HoloLens.”

While he originally thought his ideas might be too complex, a team of ten volunteers got involved in the production of the piece in order bring his concepts to fruition.

The “Transformation Mask” moves away from the typical forms of Indigenous art with its incorporation of Microsoft HoloLens technology, but Hunt said that Indigenous artists have always embraced new technologies when creating artwork.

“Our artwork is like a form of language — it’s very malleable. I’ve always been interested in the ancient-modern push pull in my work. I like the idea of making something that is a combination of both the past and the present that looks toward the future.”

Hunt also explained the benefits of blending traditional forms of art with technology, saying that “the possibility is there to open the artwork up to a broader audience as well as a younger more technology based audience … through technology I can allow the viewer to engage with the mask, and through modified reality I can try to simulate a deeper more spiritual experience with the wearer.”

While masks in museums often sit in glass cases, traditionally they are intended to be worn ceremonially.

“I hope that the mask will give the wearer a better understanding of what a traditional wooden mask’s function might be. I also hope that it challenges their expectations about Heiltsuk art and culture.”

Those are Hunt’s underlying intentions with “Transformation Mask” — to share his heritage with the non-Heiltsuk community.

“We are not a relic of the past. We are a thriving, adapting and inspired people, with an ever evolving culture and art form.”

As for his community back in Waglisla (also known as Bella Bella), Hunt hopes that his piece will inspire them to share their thoughts in new ways.

“This art form is a continuum, so I hope that the next generation will build off of these ideas and continue to evolve our art and our culture.”

As for Hunt, he hopes to continue his collaborations with Microsoft.

“The people I worked with in creating this piece are brilliant, hard working and creative individuals … there are potentially many things to investigate using tech as a medium. I have been in some preliminary talks with Microsoft about some other projects, but I can’t discuss that right now because that would just kill the surprise.”