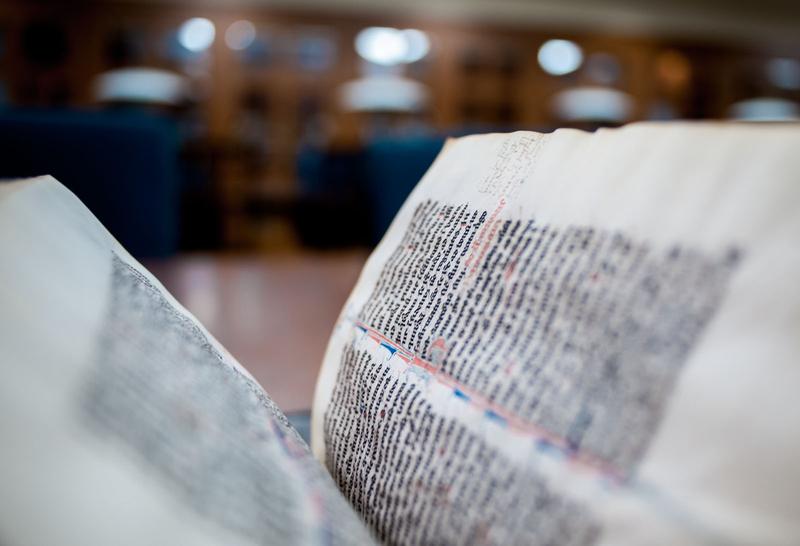 UBC’s Rare Books and Special Collections has acquired a 116-year-old copy of the Kelmscott Press' Works of Geoffrey Chaucer. As part of a two year joint fundraising effort on the part of the library and the faculty of arts, funds were donated by a variety of community partners including UBC faculty, the Centennial Initiatives Fund, and B.H. Brausler Foundation of New York.

According to Gregory Mackie, an assistant professor in the department of English whose teaching and research focuses on book history and print culture, producing this work was a four year effort on the part of William Morris, the founder of Kelmscott Press. Published in 1896, the book was his life’s masterpiece. He passed away a few months after its completion.

“It’s not simply a repository of information. It’s the book as a work of art — a sort of supreme work of art. Everything about it has been designed [and] executed in a very thoughtful way, even down to the clasps, the binding and the gilding on the sides of the page,” said Mackie.

Morris was fascinated by medieval culture and he developed the Kelmscott Press to revive printings of texts from the Middle Ages in the style they were originally designed. The book itself is surprisingly large — a Folio volume intricately designed with medieval-style bindings, typeface and detailed illustrations. Morris planned the book himself and the woodblock illustrations were done by pre-Raphaelite artist Edward Burne Jones.

“What it does is it gives us a sense of the Victorian era’s really intense engagement with the culture of the Middle Ages. This book is particularly interesting because it gives us access to the past in two ways. We see the Middle Ages through the prism of the 19th century, so we’re looking back into the ways that the past is imagined and reimagined,” said Mackie.

The edition will be added to the Colbeck Collection of 19th century literature at UBC, which is comprised of 13, 000 volumes and has been at the university for 49 years. Mackie is planning a celebration for the 50th anniversary of the collection in 2017.

The book would have cost 20 pounds in the year it was printed, or almost a year’s wages for the average working class person in Victorian society. In 2016, UBC’s library acquired it for $202, 000 USD. The difference? The book will be accessible to the public — something that was not the case in Victorian society.

“Ironically ... Morris was a socialist who believed in obliterating class distinctions and that beauty should be available to everyone. But because he was so interested in reviving ancient production methods such as weaving, stained glass making, furniture making and making things by hand to sort of push back against industrialization, that actually made the goods that his firm, Morris and Co., produced really expensive and only available to people of great privilege and wealth, of which he was himself,” noted Mackie.

As teaching is one of the primarily intended purposes for the book, Mackie hopes that it will help engage undergraduate students with the beauty and wonder of the text.

“I certainly hope students realize that rare books is a branch of the library that is there for them, even though it seems a little forbidding. This is for all of us. Tuum est — it’s yours.”