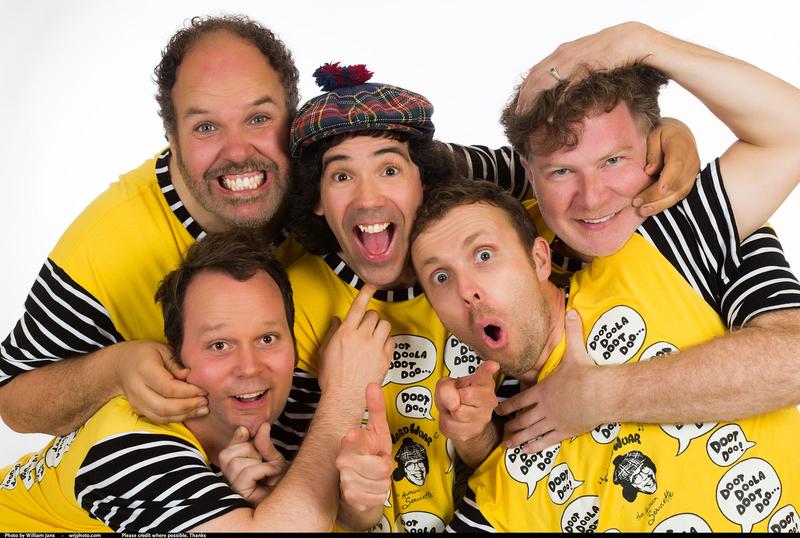 Curiously, I first knew the legend Nardwuar the Human Serviette — front-man of the Evaporators — not as an interviewer, but as a musician. I was linked to the Evaporators live performance of Andrew W.K.’s “Party Hard” while I was prepping to see Andrew W.K. live that weekend (spoiler: he parties quite hard and gives everybody he sees high-fives). Rocking out on vintage guitars in their matching white uniforms, they cut a fun but formidable presence even on my tiny phone screen. Listening to their latest record, it is clear the energy that they brought to my life has not lessened in the four years that I’ve been following Nardwuar and his musical endeavors.

The liner notes of the record indicate that Ogopogo Punk is a love-letter to Vancouver, BC. After the epic ode to the tradition of Canadian facial hair that is “Can’t Be Shaved,” the titular “Ogopogo Punk” directs its attention to the mythical land-locked monster, the Ogopogo, based in Okanagan Lake. The country-punk influence of the piece is mixed with samples of what I presume is either the Ogopogo's mating call or at least a very accurate recreation.

“Eat to Win” brings to mind classic Evaporators hits — the similarly themed dedications to deli “Addicted to Cheese” and “Salad Bar.” This foodie theme is continued to an extent in “Chuckanut” — the blaring sax of MFC Chicken and the affirmation of beef jerky painting the commotion down the Skagit Valley driveway. “Mohawks and Dreadlocks” then drives the action to a local Vancouver Punk show, and “We’re In The Teens Now” then brings in a fun, nostalgic look back at the angst of adolescence (in which I first came across Punk as a sad, single chap in the UK). “Starboard!” rounds off this section of the record in a Posi-Punk rebel cry. The album is concluded with two tracks that graciously allow other musicians to speak their piece, much in the way that Nardwuar's legendary interviews have often brought the personalities of musical artists to a larger audience.

Megan Barnes, also featured on “We in the Teens Now,” lends her sweet tones to the Evaporators rendition of The Rabble’s “Candy,” bringing the duet to an audience that The Rabble had aspired to before their untimely demise. Then the outro is dedicated to Brother Ali’s hip-hop tribute to Nardwuar — the beat crafted from gifts the rapper received during his Nardwuar interview, his verse capping off the record.

The happy-go-lucky shrill tones of Nardwuar's vocals and organ combo do battle with the the three pronged attack of the Evaporators guitar trio — John Collins, Stephen Hamm and Shawn Mrazek — whose soloing characterise the record and enrichen the short songs. The battle is kept civil and structured by Nick Thomas’ drums (and mastery of the tambourine and egg shaker), with each member of the Evaporators lending their vocals to the ensemble throughout the record. It all blends perfectly, despite threatening to spill over into chaos at several points. The short songs keep the pace up, and ensure each hook has its own individual flavor.

Listening to the Evaporators’ Ogopogo Punk kept me smiling despite a myriad of deadlines and bad news, and there's not much of a better compliment that I can give it. The hooks worm their way into your head until you’re humming them on the regular, not unlike Nardwuar’s own “Doot Doo!” motif in his interviews.

It’s clear the players have a tremendous fun and respect for the material they address on the record, whether it be mythical monsters, hairdressers, mohawks or beef jerky. And it’s just so FUN! Like, really really fun! It’s nice to review something with such energy to it — a fine replacement if you can’t get your caffeine kick in the morning before that 8 a.m. class you hate.

Having been able to meet and talk to Nardwuar multiple times — hosting my own radio show on CiTR after his long-running Friday 3:30 residency — I can confirm I get just as much joy and inspiration from his openness and devotion to music as you can get from listening to the Evaporator’s Ogopogo Punk. In the words of Brother Ali:

"They say baby you’re not a star, / You’re too underground and too avant-garde, / Can’t nobody tell you how hot you are, / When you’re chillin with motherfuckin Nardwuar."