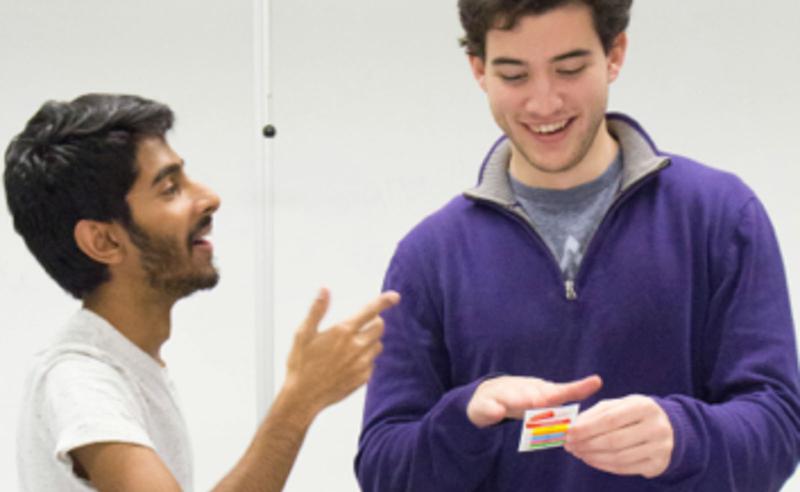 There are approximately 200 sign languages in the world. Photo courtesy UBC Signs

Officially founded this year, UBC Signs grew out of a desire of several linguistics students to learn American Sign Language (ASL), the primary sign language in Canada and the United States.

The club runs two main programs — weekly ASL lessons that are led by Danos and Honing ASL for New and Developed Signers (also known as HANDS), an ASL conversation group that meets biweekly. Although the club touches on the other sign languages spoken in Canada, the focus is currently on ASL as it is native to this region of the country.

“Our ASL lessons are not classes. They're not meant to bring people to a level of fluency,” said Danos. “What we are teaching is how to be in a Deaf environment, which is very different.”

Whereas “deaf” is often used to describe a level of hearing loss, the term “Deaf” describes those who identify with other members of the Deaf community – a cultural distinction, rather than a medical one. Unlike learning another spoken language, picking up a sign language and switching to an unfamiliar mode of communication can be a more difficult skill to grasp.

As the lessons are held in a Deaf environment, no voicing is enforced starting from the second lesson onward. The intent of the lessons is to help ease a learner’s transition to a voice-off environment, introducing basic question words such as who, what, when, where and why as well as syntax and finger-spelling – using various hand shapes to represent letters of the alphabet.

According to Danos, students have joined the club for a variety of reasons, ranging from pure curiosity to wanting to be able to interact with Deaf family members or clients.

Rafael Ruiz, a second-year student entering the BFA acting program, has had previous signing experience in high school and discovered the club after having a conversation with a Deaf person at the bus stop.

“I met some really great people in the club,” said Ruiz. “Some are hearing and we sign to each other at school sometimes … but the club allowed me to make connections with the Deaf community in Vancouver.”

On the other hand, Marie Shuman, a fourth-year linguistics and French major as well as the club’s newest addition, was initially intimidated entering the club last month – something that quickly changed.

“It’s really good for beginners – everyone is so accepting,” said Shuman. “I came in going, ‘Oh no, my knowledge of ASL is so minimum [sic].’ But I feel comfortable signing in front of other people.”

Danos, who is graduating this year, hopes that the club will continue to grow. He envisions holding an annual symposium on the different sign languages spoken in Canada as well as potentially collaborating with UBC researchers and the linguistic department.

“Our goal as a club is to push UBC in a more Deaf-friendly direction,” said Danos.