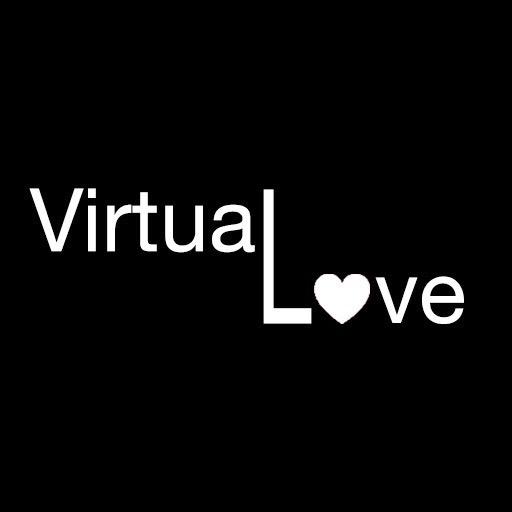 As we enter our eighth week of self-isolation, finding a genuine romantic connection has never been harder. UBC Virtual Love

As we enter our eighth week of self-isolation, finding a genuine romantic connection has never been harder.

While many across the world are turning to the usual culprits — Bumble, Hinge and … (shudders) Tinder — for a chance at that spark, a group of UBC students have taken it upon themselves to create an alternative: UBC VirtuaLove.

Inspired by popular dating shows Love Is Blind and the even more recent Too Hot To Handle, the Instagram account/reality TV show has been created to pair up UBC students without the factor of physical appearance.

As well as the Netflix shows listed above, the organizers looked towards the New York-based Instagram account @loveisquarantine. The account, which is run off of Instagram and Google Sheets, pairs participants and asks them to film themselves after their blind dates in self-isolation.

UBC VirtuaLove uses the same template. However, registration has been currently limited to members of approved UBC organizations such as AMS Events, Ski & Board, Greek organizations, Varsity sports, UBC REC, The Plug and The Calendar. Nevertheless, UBC clubs can DM the account to add their organization to the list.

How did it start?

The organizers of VirtuaLove came up with the concept at the end of April, just a few weeks after Love Is Blind aired its final episode. For the unenlightened or Netflix-less, Love Is Blind is a ten-part reality TV show which follows contestants who meet, fall in love and get engaged all without ever seeing each other. As quarantine began, the VirtuaLove organizers saw Netflix’s Love Is Blind as a reprieve from “awkward studying and nothing in between.”

The organizers wished to remain anonymous so that the entire process can be hidden from the contestants and viewers alike.

After toying around with the idea of applying to the Netflix shows themselves, the group decided to create a show that students like them could easily participate in. For the organizers, dating apps such as Hinge, Bumble and Tinder have had a desensitizing effect from getting to know new potential matches for their personality.

When the group discovered Love Is Quarantine, they thought about how to make a pragmatic version for UBC students just like them. After narrowing the group down to a few organizations that they felt would be comfortable vlogging themselves, they launched an Instagram account and started randomly following people.

The first season had 35 applicants and from those applications, the team was able to cast 12 participants, 6 men and 6 women. Filming for the first cohort started on Thursday, May 7 and finished on Saturday, May 9.

How does it work? 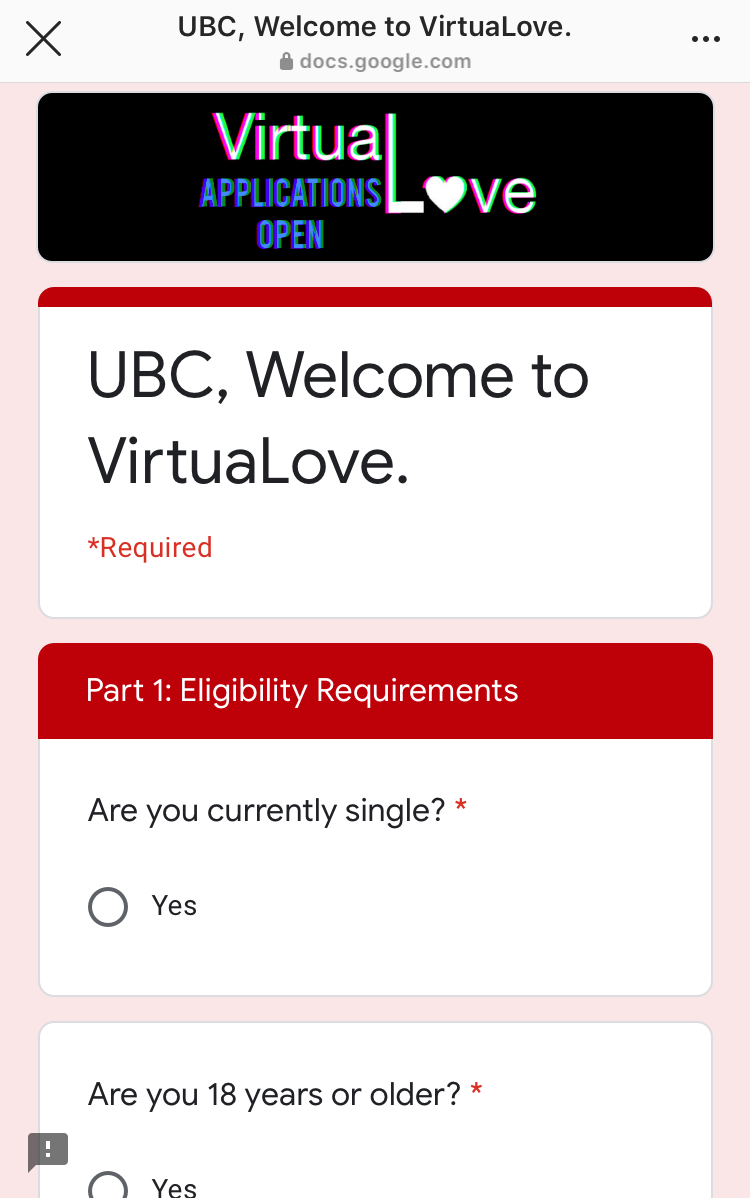 In VirtuaLove, contestants apply via a Google form broken into three parts. Part one is focused on eligibility requirements, age, UBC affiliations and relationship status.

Part two takes basic information about the participant, including their major and their sexuality. Participants can be matched with participants of all genders — however, in this cohort, all the pairings are heterosexual. 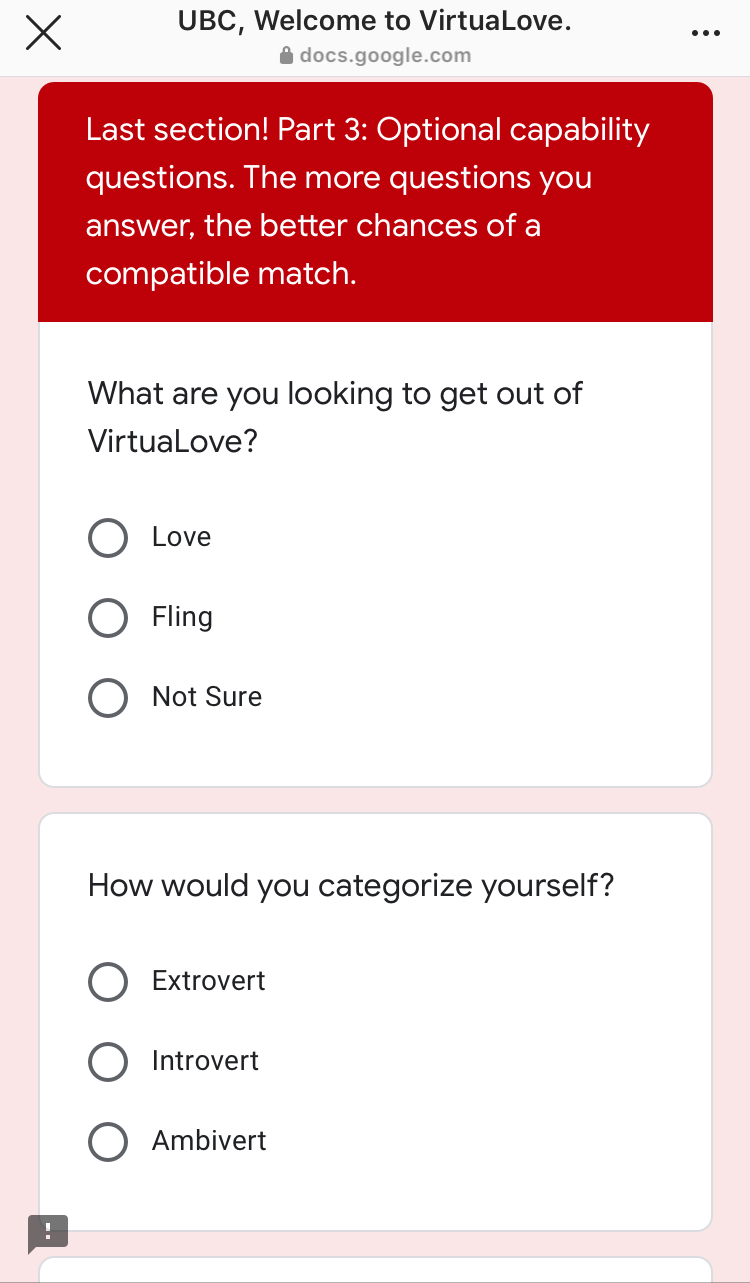 Part three includes optional compatibility questions. Questions such as “What’s your biggest pet peeve?” and “What does a typical Friday look-like? (pre-COVID?)" help the team create a character profile of each person. This assisted them in understanding the “overall vibe” of the contestants, many of whom they did not know.

After the contestants are chosen, they are each matched with three people they have not met, or at least don’t follow on Instagram. Every day of filming, the participants are sent a customized schedule with the names of their chosen matches. 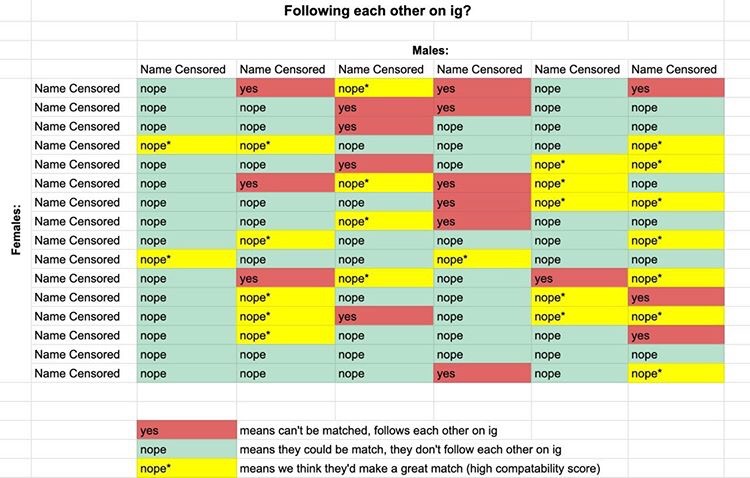 After the contestants are chosen, they are each matched with three people they have not met, or at least don’t follow on Instagram. UBC VirtuaLove

On the first day, they are introduced to each other in the form of a rapid 10-minute speed round. After all of their dates are finished the organizers are sent rankings from the contestants helping them create the pairings for round two. Every night, one of the pairings is eliminated. While the dates are not recorded so the participants can focus on getting to know their matches, the participants will create post-date reactions for our viewing pleasure.

On day two, contestants will be paired with two of their matches whom they will speak to again on a blind date for half an hour.

On the last day, known as “the reveal,” contestants will be allowed to FaceTime with their final match.

Although the VirtuaLove team did not know many of the season one contestants before filming started, there were a few commonalities — one of these being how they were perceived physically. “Based off the introduction videos, a lot of the guys were saying they’re automatically based off their short height and a lot of the girls were automatically based off their tall height,” said one of the organizers of VirtuaLove.

“So they’re [trying to] see if [they] can make a genuine connection with someone [that they themselves] don’t automatically judge.”

In terms of what the team sees as the best-case scenario for the series, they hope that the contestants find genuine connections even if they don’t pursue something romantically. And for us at home, they just hope that we can “follow along with the stories and be entertained by them.”

The pilot episode of VirtuaLove airs tonight on May 10 on the @ubcvirtualove Instagram page. VirtuaLove is casting for season two now.