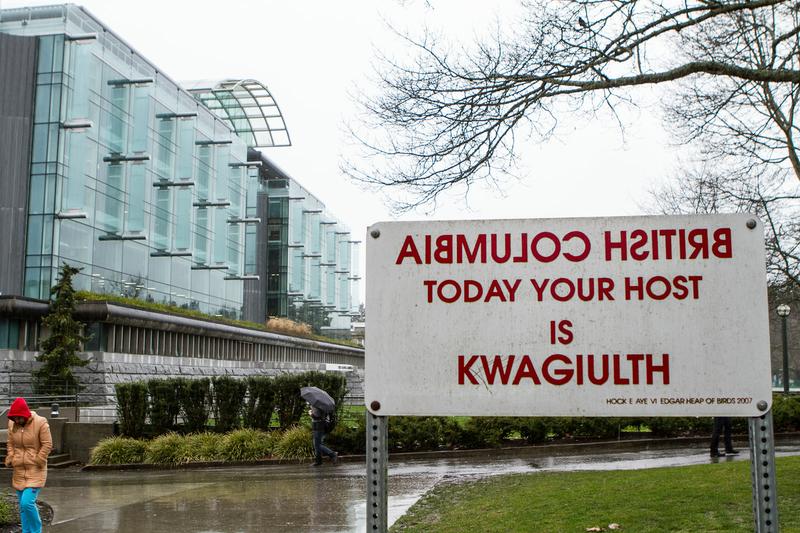 “Outdoor art has the power to influence the dialogue and create change as much as we represent it." Kai Jacobson

As the installation of “The Shadow” begins in front of the Nest, students have suddenly found themselves face-to-face with public art — either as observers or sometimes literally, as they detour around the construction zone. But the massive brickwork piece is just the latest in a long tradition of outdoor artwork installations, some of which we pass by on a daily basis without a second thought.

There are nearly 30 public art pieces on campus, all curated by the Morris and Helen Belkin Art Gallery. Some have been here for half a century, others for mere years. Their goal is to shape the space we spend our days in — whether we’re conscious of it or not.

Many arts students are familiar with “Concerto,” a standout of the Belkin collection at the entrance to Buchanan A. It’s made of copper sheets, patterned into jagged peaks transposed with some smoother rounded edges, and it adds a little life to the otherwise dull brick background.

“It’s meant to be sort of like a brooch, which adorns the face of the building,” said Barbara Cole, the curator of outdoor art

Cole is in charge of both bringing in new commissioned works, like “The Shadow,” and maintaining the existing pieces. She’s the behind-the-scenes manager of things, and there’s a lot more to do than it might seem.

The “Concerto” was taken down for several months last year to be refurbished. Interestingly, that project didn’t involve restoring the copper, which is now rusted green.

Cole is also working on a much larger restoration of the mosaics on Brock Hall. Installed in 1958, the mosaics are composed of 54 connected blocks, each one representing different faculties and departments at UBC. After years of wear, grout has begun growing between the stones, meaning Cole has had to call in conservators to determine how to clean the piece without damaging it.

“There are a lot of considerations involving the value of the work and the cost of refurbishing it,” Cole said. “Can we do it without taking it down? ... If we have to, do we put it back up in the same place?”

UBC’s art hiatus lasted until fairly recently. “Millennial Time Machine” revived enthusiasm for public art when it was installed on the corner of Main Mall across from Buchanan in 2003. From a distance, the work looks like the outline of a massive old-fashioned carriage, but the inside has been converted into a camera obscura — a precursor to the modern camera which projects an upside-down and backwards image onto a lens. It’s pointed at a sequoia tree across the grassy space in front of the clock tower, symbolizing the connection between past and present.

“It’s a piece that changes and takes on new meaning as time goes by,” said Cole. “As the tree grows, the picture on the lens changes — and now the Residential School History and Dialogue Centre is being built in that space, which gives it a whole new perspective.”

“The piece is incomplete until you’re sitting there inside it,” added Naomi Sawada, manager of public programs at the Belkin. “It’ll be different based on the time of day and who’s in there with you. All of that is part of the art.”

Relationships with space are vital to most pieces in the public art collection, making them part of the fabric of the university itself. Every decision involving restoration or refurbishment has to take into account the art’s significance and relationship with the site it is built on. A good example are the “Native Hosts” signs, positioned on twelve different sites throughout the south part of the campus. Each sign displays “British Columbia,” written backwards, “today your host is” and the name of a different nation: Musqueam, Lil’wat, Squamish and others. The artist, Edgar Heap of Birds, worked closely with the leader of the Musqueam nation to decide where they should be and which nation should be represented on which sign.

But space also influences the medium, as well as the way people might interact with what they see.

“Outdoor art has the power to influence the dialogue and create change as much as we represent it,” said Cole. “You walk by a piece every day and it sits in the back of your mind. It really forces you to think about it and engage — very differently than you would with indoor art.”

Moving forward, Cole wants to explore pieces through different mediums to contribute to that diverse dialogue. That includes performative pieces and temporary pieces — art that might not persist in physical form, but through a “legacy.”

“A good collection should have a balance between permanent and transient,” she said.

In the case of public art, it has to be both.