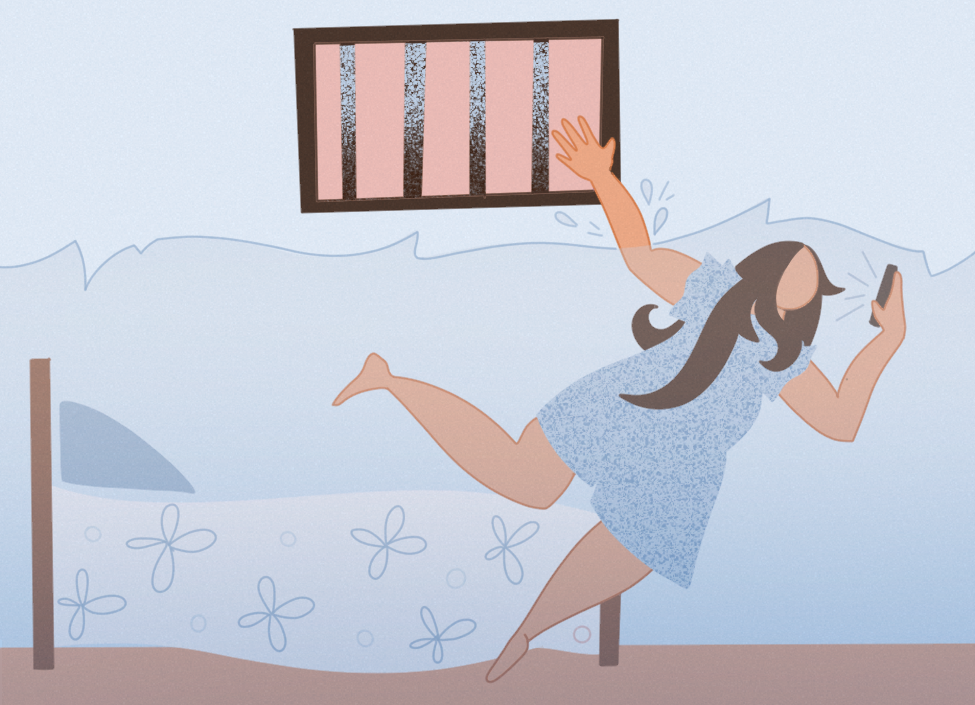 It’s funny, the ways in which loneliness manifests.

Ubyssey · Under Water- Stories from Self Isolation

In quarantine, it crept in like water, turning black, a deeper shade of night, almost imperceptible. As if a nation was heading into war, those of us on the home front drew our curtains tight and prepared to weather through the coming weeks, or months, to keep the virus off the streets and ourselves out of the hospitals.

We did it so that those on the frontlines could care for their patients, with the hope that they could keep the fluids in their lungs at bay.

But in our airless little boxes, some of us were already drowning.

I lived in the attached suite of a friend’s house whose inhabitants hardly ever left their rooms, even in normal times. All I had for myself was a small kitchen, a bedroom, and a bathroom.

The one window I had facing north was decorated with a scrubby strip of grass that passed for a backyard (which was typical in these newer Richmond homes) and another facing a fence, so my living space received very little direct sunlight.

When quarantine first started, I was unnerved, but also a little relieved. I craved the slowness of staying at home, of sleeping in, of hitting pause. I resisted returning to Victoria to live with my parents because I’d always felt trapped there, a little suffocated.

As crazy as the world outside may have been and as isolated as I was, for those five weeks of what I would later dub ‘scholarly prison,’ I didn’t really notice anything but the academic stress. I would wake up late and then with sluggish resignation, begin chipping away at the never-ending stream of midterms and final assignments that constituted March Madness.

If I couldn’t keep my eyes open — which half an hour in, I often couldn’t — I’d take a nap, lulled to half-sleep by a sensation of sinking into something far deeper than my blankets, some space edging on the point of no return.

After six or seven hours of forcing myself to study, I’d allow myself the luxury of figuring out how to feed myself, my stomach already twisting from hunger as I spent an hour or more trying to make a real meal from a half-empty fridge. I didn’t have a car, so I could only buy what I could carry. And what I could carry didn’t last long when every meal was eaten at home and every piece of government advice begged me not to go to the store unless absolutely necessary.

I would study till almost midnight, feeling guilty for spending too much time polishing off some rice. I’d shower, then fall gratefully into my bed once more.

My hands would glow blue in the stillness until 3:00 a.m. Nighttime was a foreign hour when everyone else seemed to be up, too. I had people I hardly knew texting me, then getting angry when I didn’t reply. I brushed them off, offended because unlike them, I didn’t feel bored at all. Somehow, I felt busier than when school was in person. Too busy for loneliness.

And yet for all my nighttime conversations, like a sprouting sickness, the loneliness was there, manifesting in unexpected ways.

I started craving the no-less-than-seven-days-since-the-last-trip mark when I would strap on my mask and trek to the grocery store. I didn’t even mind when a stranger wryly confronted me over grabbing the last carton of eggs. I waited with anticipation, for the occasions when my friend from the other side of the house would come with me. What would have been lechery a month ago, to see some skin, now felt like a lifeline, to see the inch of eyes peering between the mask and a curtain of fringe. I’d leave the door open, bid her help me as I sanitized my cereal boxes and frozen fruit. But eventually, she would retreat again, to her room, and me, to my readings.

I started letting the cat roam to my side of the house even though I don’t like the animals. I let him jump on my window sills and leave fur on my floors. I’d sworn off TikTok months ago and now spent hours chuckling, sometimes cackling, to myself every night, with no one to tell me hush.

I called people while I cooked.

I called people to tell them when I was too lazy to get out of bed.

I called my parents more than I’ve probably ever called them before.

And I didn’t even notice it, how over those five weeks I became a ‘calling’ person until I moved home, weeks later, and went back to texting.

One night, I sat on my side of the kitchen wall, watching something on my phone over the sound of my friend’s younger brother watching something on his, and our laughter synced momentarily. We couldn’t even see each other, in separate parts of the house, yet there we were, laughing together, separately.

It was the loneliest sound in the world.

Giving loneliness a name only came when I had the word in hand and the hindsight that has come from emerging from the most severe days of quarantine.

I had thought, from a freshman year spent trying to fit in, that I had known what loneliness was. But this loneliness —when I had friends but couldn’t see them, when the same day would repeat, again and again, void even of saying ‘Hello’ to the bus driver or ‘Thank you’ to the barista, was different. This loneliness, spent in un-nourishing fluorescent lights and phenomenal screen time, was different. I spoke to my friends every day. I sent them TikToks at 2:00 a.m. and asked my parents what they’d eaten for dinner. I was not, technically speaking, ‘alone.; Yet the loneliness came in, sure as the tide, turning difficult times into a deeper shade of night.