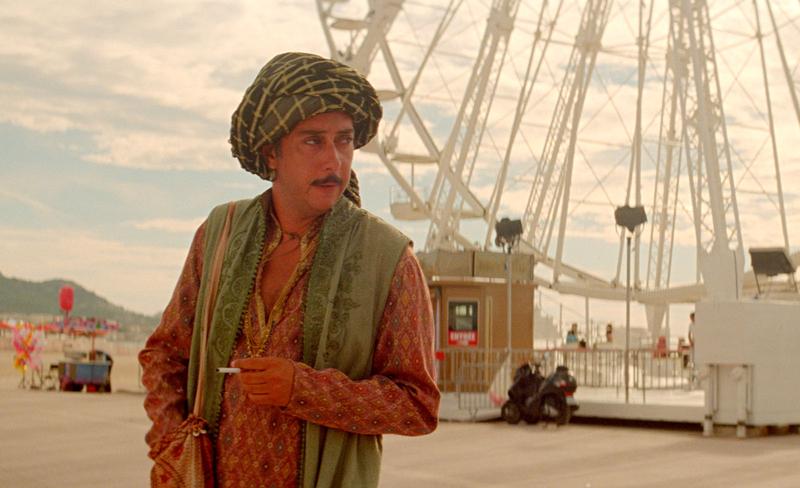 The prospect of a three-volume, six-hour film entitled Arabian Nights inevitably creates a certain expectation. It immediately conjures up stories akin to those of the original Arabic text in which Scheherezade staves off her own execution by tantalizing her husband, the murderous King Shahryar, with various alluring tales. But within the first few minutes of the film, Portuguese director Miguel Gomes (Our Beloved Month of August, Tabu) daringly bulldozes this expectation revealing that his actual intention is to explore the impact of Portugal’s austerity program on his fellow countrymen.

Although Gomes uses the structure of the original text, the film is emphatically not an adaptation. Instead, it’s a fictionalized account of real events that occurred between the summers of 2013 to 2014. The result of this ambitious project is understandably uneven. But taken as a whole, it is one of the most socially significant and politically charged films of the year.

The film opens with a bit of metacommentary via a documentary-style prologue which helps to clarify the film’s aims. While ruminating on the mass unemployment in the shipyards of Viana do Castelo as well as the swarms of wasps that plague the area, Gomes (playing himself) grapples with the task of making a film about the Portuguese working class. An overly political approach would be too uncommercial — a more commercial story would be little more than dandyism. Given these prospects, it’s unsurprising that Gomes’ onscreen self attempts to run away from the project. The prologue ends with Gomes' own life threatened and thus beginning the tale of Scheherezade — the fiction begins.

True to form, the stories that follow mix socio-political commentary with fantastical narrative digressions. In “The Story of the Cockerel and the Fire,” a cockerel on trial for crowing too early defends itself in voiceover by telling of a love triangle that somehow involves arson and is later voted for in a municipal election. “The Swim of the Magnificents” largely consists of interviews with three unemployed men who take part in a traditional New Year’s Day swim in the Atlantic, but also inexplicably includes an exploding whale carcass and a beached mermaid.

Unsurprisingly, the stories also vary in scale and ambition. The “Chronicle of the Escape of Simão ‘Without Bowels,'” which follows a fugitive of the law who ends up becoming a folk hero, is pointlessly peripatetic and disappointingly one-note. “The Owners of Dixie,” on the other hand, elaborately builds a portrait of a working-class housing community by following a small dog that is passed along from owner to owner. But the most pointed episode, by far, is “The Tears of the Judge”— the second story in Volume 2, The Desolate One. Beginning as a simple courtroom case regarding some stolen furniture, the story ends up tangled in a long, digressive chain of blame and misery that somehow involves a talking cow, a 1000 year old olive tree, 12 Chinese brides and a genie to name but a few. Everyone is at fault and, at the same time, no one is. Responsibility is simply passed along from person to person until even judgment itself becomes meaningless.

The final volume, The Enchanted One, is in some ways the most ambitious of the triptych. Employing double-exposures, split-screens and copious amounts of on-screen text, it is easily the most formally playful episode. It’s also the most narratively daring as it opens, not with a story by Scheherezade, but with Scheherezade herself who wanders the kingdom doubting her own capacity to tell stories that will continue to engage the king. The story that follows, an 80-minute account of bird trappers who train chaffinches to sing in competitions (“The Inebriating Chorus of the Chaffinches”), explores this idea in the extreme. It’s a deliberately rambling episode that pushes against the boundaries of acceptable narrative and practically dares the audience to continue along with it. Somehow, we do —the birds sing and we listen.

On its most basic level, Arabian Nights is about telling stories in order to survive. The boldness of Gomes’ trilogy is that, by disguising its socio-political stories within the structure of Scheherezade’s One Thousand and One Nights, it makes a stand on which stories deserve a chance to be told. It might be the most daring and potentially rewarding bait-and-switch in contemporary world cinema.