VIFF: Holy Air is a satire that delivers strong social commentary but lacks a comedic punch 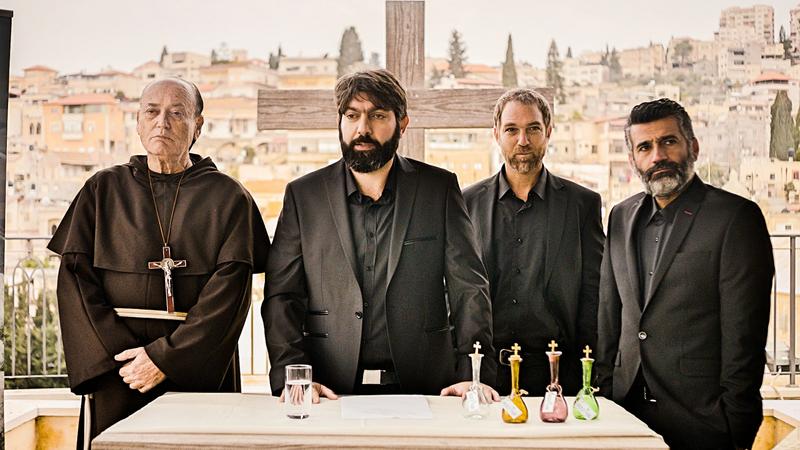 On the summit of Mount Precipice, Adam — a down-and-out Arab-Christian entrepreneur and expectant father — sits in his car, a trail of marijuana smoke rising from the sunroof, when a crowd of tourists passes by. He overhears their ecclesiastical tour guide describing the mountain’s “sacred” air. Whether by divine inspiration or (more likely) cannabis-induced inspiration, Adam is struck by the business concept he has been waiting for: he’s going to bottle and sell “holy air.”

While the premise may sound humorous, many of the comical scenes in Holy Air are overshadowed by the gravity of its subject matter.

The film takes place in Nazareth — home to one of the holiest sites in the world for Christians, Muslims and Jews, and a region that has experienced centuries of armed conflict and ethnic tension. Writer and director Shady Srour doesn’t shy away from this controversy — rather, he ambitiously takes it head on.

For instance, after struggling with whether or not they want to bring a child into a world they see as bleak, Adam and his wife Lamia decide to apply for an abortion. Their case is reviewed by three Israeli adjudicators, two of whom disagree over whether to approve their application. One argues that they need to encourage more respectable Arabs to procreate, and the other is concerned with their potential overpopulation. As they shout back and forth, the third judge is caught in between, being nudged back and forth, silently wearing a blank expression. While the irony seemed to strike a comedic chord in some audience members, many found the scene to be more somber and troubling then comical.

While initially seeming implausible, Adam’s “holy air” business is soon thriving thanks in large part to the credulity of his customers. When he celebrates his success with his old friend, he is congratulated with the words, “So Adam, you finally learned how to make money off of religion.”

It is clear that the film is taking a jab at the credulity of the religious, as well as the hypocrisy of those who use religion for personal gain. This point is emphasized when Adam manages to get his product endorsed by the three major religious leaders. They are portrayed more like mob bosses who are less concerned with the commercialization of their respective religions than they are with securing their 10 per cent “cut.”

Here the satire gets closer to reaching the film’s comedic ambition. But again, the comedy is overshadowed by the realism, and one is then less likely to laugh when they’re being reminded of the history of exploitation and hypocrisy that has plagued these religious institutions.

While Holy Air may lack the comedic effect that you might hope for from a satire, it is still a film worth seeing thanks to the forceful social commentary. Srour cleverly brings the viewer into the complexities of family life in a city like Nazareth, while offering a thoughtful take on its political and cultural troubles. Though not likely to split your sides, this film is recommended for those who appreciate dark satire and want a realistic glimpse into a region we rarely see on screen.