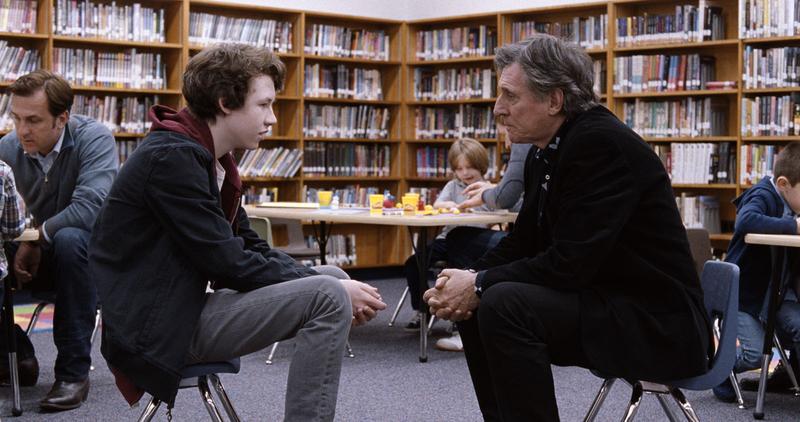 Less generic than its logline makes it sound, Louder Than Bombs — the English-language debut of Norwegian filmmaker Joachim Trier — attempts to inject interest into a rather banal story of familial grief.

Three years after the untimely death of a celebrated war photographer named Isabelle Reed (Isabelle Huppert), a celebration of her work and legacy forces her husband Gene (Gabriel Byrne) and their two sons, Jonah (Jesse Eisenberg) and Conrad (Devin Druid), to grapple with the loss afresh. Although publicly believed to be an accident, her death was actually a suicide — a fact that only Conrad, who was 12 at the time, remains unaware of.

A ticking bomb comes in the form of a forthcoming New York Times article written by a colleague and friend of Isabelle’s that will mention the suicide. The bomb does go off eventually, but it’s refreshing that it happens neither in the expected manner nor with the expected effect.

“If you change the framing of an image, you can change the whole meaning,” says Conrad in the film recalling what his mother had once taught him about photography.

By employing a fragmentary and genuinely exciting non-linear structure, Louder Than Bombs attempts to do just that. Narrative shards are peppered with bursts of expressionistic editing. Fragments build on each other reflecting and refracting various emotional strands. Timelines converge and perspectives shift. Memory gives way to fantasy which then gives way to cathartic reality.

For a while, the phenomenal editing keeps the film’s more unsubtle tendencies at bay. A shift in perspective converts a silly, portentous-seeming detail into a sly nod to Hitchcock’s Vertigo. A facile conversation about video games gives way to a thrilling montage of personal expression.

Eventually, the more grating elements become difficult to ignore — formal interest notwithstanding. Angst and alienation abound, a subplot involving Conrad's teacher and Gene (also a teacher) starts out as derivative but quickly turns dire. Conrad in particular is a moody teenager who plays first-person shooter games. With a pair of headphones perpetually perched on his neck, he feels dropped in from a silly melodrama.

Certain elements such as Conrad's conception turn out to have a larger purpose. Potentially disastrous narrative turns are revealed to be sly feints. Even the ending, although superficially underwhelming, is surprisingly cathartic. It manages to reframe the rest of the film and unearth an entire emotional undercurrent beneath the heavy-handed drama. To achieve this, Trier and his co-writer Eskil Vogt engage in some narrative withholding – always a tricky choice. Done well, it can result in towering masterpieces like Atom Egoyan’s Exotica, another story of memory and deferred grief. Done poorly, it can come across as cheap and manipulative.

With Louder Than Bombs, Trier manages to split the difference offering up trenchant exploration alongside silly contrivance. From a narrative standpoint, the film actually succeeds more because of what it doesn't do than what it does. In that sense, the film fully realizes its title. The whimper ends up being louder than the bang.